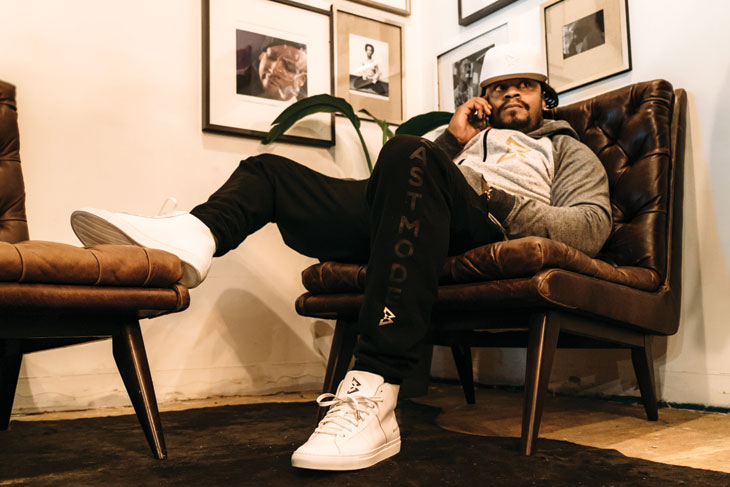 Between leaving the Seahawks to “retire” from football in 2016 and joining the Oakland Raiders in 2017, Marshawn Lynch connected with mobile-industry veteran Leigh Hunt to launch Beast Mobile in September of this year.

Cause humble Kings move in silence. I don’t think he’s promoting what he does. He’s doing it because he wants to.

To say it’s a cell phone network isn’t entirely accurate; Beast Mobile is a brand partnership between Lynch and Hunt’s startup FreeMo. FreeMo is an Android-based app that delivers ads to the home screen of users’ phones, currently on the Sprint network, in return for a $5 per month reduction in monthly bills. Further user engagement with videos, games and other mobile ad experiences served by FreeMo further reduces the bill. Monthly fees for Beast Mobile start lower than other plans, so potentially a user who engages in enough advertising could see a bill for zero dollars—or even make money from the service.

“You’re on your phone more than your computer these days and sharing data more than ever,” Hunt says during a recent phone interview. “Apple, Twitter, Facebook make billions off our data. We wanna generate money through ad revenue but we wanna make sure your phone bill is paid. Everyone has a price that their data is worth, whether you’re a CEO or a college student. There’s information that advertisers wanna reach. So we’re giving you money for your data.”

The Phones for the Homeless program, as the company calls its philanthropic endeavors, came out of the blue. Bryon Sheng, Chief Marketing Officer at Beast Mobile and Lynch’s longtime business associate, says he and Lynch learned that an old childhood friend was buying phones from an Oakland store, preloading them with three months of service and handing them out to local homeless folks. The idea dovetailed with work Lynch was already doing with his Fam 1st Family Foundation, so Beast Mobile acquired 3,000 phones and is now working with nonprofits like the United Way of Seattle to distribute them to homeless people.

Sheng points out that Lynch graduated from University of California–Berkeley with a degree in social welfare.

“Before he knew he’d be an NFL player he was on the path to doing things in this space,” he says. “And Seattle was amazing for him. He’s been fortunate to rub shoulders with a lot of people—Paul Allen and Howard Schultz were guys he could call. And we learned a lot about the cell phone space from Leigh. You don’t build a relationship with those types of guys unless you’re bringing something to the table.”

Sheng and Hunt admit that Lynch’s notoriously mercurial personality presents PR challenges, but they see it as an asset.

“The foundation of who he is, not just as an individual but a brand, is—like he said in Seattle—all about that action,” Sheng says. “When people work with him they find out how authentic he is and there’s no way to work around it. This opportunity is only gonna grow, and if we can make social change at the same time, that’s the way.”