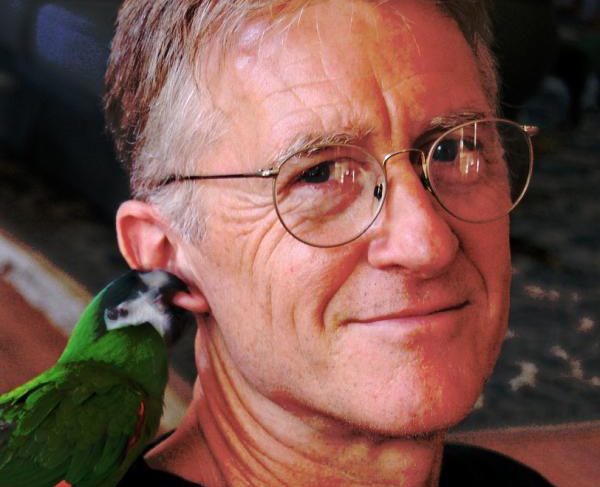 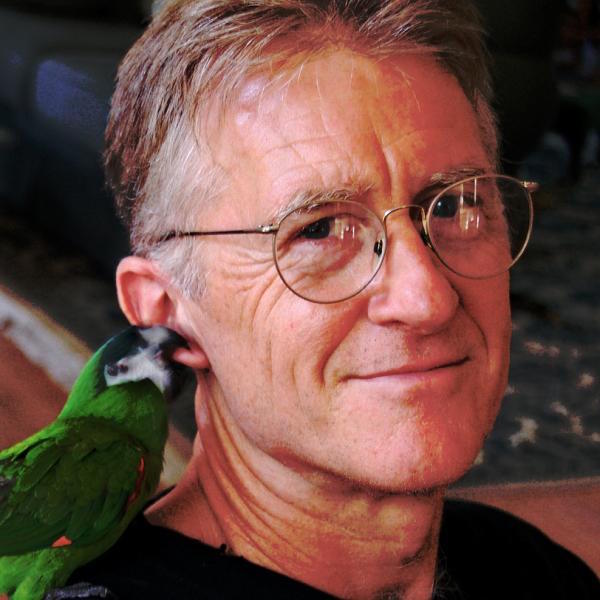 In “Bartleby, the Scrivener” (1853), Herman Melville’s famous short story, a young clerk in a lawyer’s office suddenly refuses to perform. “I would prefer not to,” Bartleby replies to anyone who asks. His employer, a well-to-do lawyer, is baffled by his new employee’s behavior but cannot bring himself to fire him. He finds something compelling in his obstinate, inscrutable, and irreverent refusal. In the end, Bartleby is jailed for refusing even to leave the lawyer’s office; he dies of starvation in a jail cell, preferring not to eat.

Curtis White, cultural critic, novelist and professor of literature at Illinois State University, has been beating a Bartleby-like drum for years now, urging his readers opt out of the dominant controls pervading American life. Rather than argue for self-abnegation to the point of self-destruction, however, he emphasizes a return to intelligence, critical thought and, in his latest book, We, Robots, an artistic state of play. White reads at Elliott Bay Book Company on Friday, March 25; we corresponded over e-mail.

One of the things I really love about your books, particularly The Middle Mind (2004) and The Barbaric Heart (2009), is your insistence that the arts and humanities have value in and of themselves. Do you ever feel that you are fighting one side of an intellectual civil war—the arts and humanities on one side, science and technology on the other?
Well, I’m not an art for art’s sake guy. What I think is well expressed by the German philosopher Friedrich Schiller: “Art models freedom.” It’s like my daughter, a Seattle resident, once told me, “I know if I can be friends with someone by knowing what music they like.” In more sophisticated terms, she is saying that she can tell the difference between music that is conventional (ideological) and music that is following no particular set of rules. The music of the Animal Collective, for example, shows us what we want. It shows us what it feels like to be free, and it shows us the way to something worth being loyal to. It’s a subculture or a counterculture, if you will, and we need more of it. American society of the present feels really locked down: you have to go to college if you want a job; you have to study STEM disciplines if you want to pay back your huge student loan, and next thing you know you’re spending the next thirty years living the life of a data drone. If you don’t do this, it’s NO JOB FOR YOU! It’s not a fight with science and technology per se. It’s resistance to the stories we’re told by science and tech ideologues to get us to accept the condition of being locked down.

Yes, and this increasingly seems to be the case in urban, tech-oriented (or “tech-anointed”) places like Seattle. An early section of the book is devoted to a reading of techno-libertarian arguments of economics. You write that, on the current trajectory, we will have a top 10–15 percent “who are capable of symbiosis with computers”; a middle class comprised of maids, personal trainers, tutors and nannies (essentially servants for the ruling class); and a substantial lower class whose jobs have been made obsolete by robots. This is obviously a frightening vision. In the book, you emphasize the importance of telling stories. What kinds of stories will we need to tell to avoid living in this kind of future?
What you describe is the vision of libertarian economist Tyler Cowen in his book Average is Over. He says that it is the inevitable future, so get ready for it. Fit yourself to the needs of computers. No whining, you’ve been forewarned. Of course, this is not the economy of the future; it’s the economy of right now to a great degree. Here’s the irony, though: all of those white collar jobs and factory jobs that didn’t come back after the Great Recession, it pushed millions of people out of the middle-class or just completely out of the economy. If these millions did find something, it paid much worse than the job they lost. And now those people are angry, beside themselves angry, and they’re voting for Sanders, for Trump, and for Cruz. I saw a quote from a Trump supporter the other day that read, “I don’t necessarily like Trump. What I’m hoping for is to blow up the Republican party.” All of those workers pushed down or out, they just want to destroy whatever it is that led them to this situation.

I wrote this book for “us,” our side. I’m not trying to persuade anybody who isn’t already prepared to think in these terms—the alienated, the outsiders, the resentful. What I wanted to do for “our side” is to clarify who it is that we are and why we are the way we are: we’re connected to this ongoing tradition of Wordsworth, Wagner, Nietzsche, John Lennon, the Ramones and Radiohead.

In a chapter entitled “The People of the Id,” you examine the rage of white rural working-class people. You write, “When a collective is willing to die for its narcissism—for its stories—the result is inevitably fascistic (the Nazis were storytellers before they were a war machine) because stories ‘worth dying for’ are intolerant of other stories.” Do you view the Trump rebellion in these terms? Or is the phenomenon somewhat broader than that?
It is a scary moment. The positive side is that the People of the Id (rural, ill-educated, evangelical) are starting to exercise the politics of resentment, and they’re starting to recognize themselves as a class (as Marx would say). This has been greatly facilitated by the Tea Party. The bad side is that they are narrow, reactionary and rather open to the idea that they may proceed violently (ask Cliven Bundy). Trump et. al. court this group in God-awful ways.

You spend some time theorizing the city in this book. On the one hand, you write that the experience of living in the city is often much less than what we would like to think it is—rather than a place for collective decision-making and communal experience, it is, primarily if not exclusively, a “profit scheme.” Yet you also say that “the city” retains a special place in the cultural imagination. Why?
What I try to show is that the reality of the city in 1850 has almost nothing to do with the city as the modern reflection of industrial capitalism, and now corporate capitalism. Lewis Mumford is great on this in The City in History. So, we say “city” but we haven’t really thought through the word. Chicago in 2015 is not Chicago in 1895, and it is certainly not Berlin in 1795. What capitalism found was that there is profit in congestion, whether in the form of surplus labor to control wages, or the megalopolis as a concentration of consumers. That’s San Francisco and Seattle now.

The positive aspect of cities is that we use them to “vote with our feet.” If you grew up in rural Kentucky (as my son-in-law did), but for whatever reason you were infected by the weird, the avant-garde, the resistant, it makes sense to move to Portland, say, in order to be with people who are like you. Hence, the urban hipster, trying though the hipster can be. To save their lives, in a sense, they move to Portland and try to live through the city’s ironies: democracy, self-education and art.

You argue against so-called “realist” literature, connecting the preference for stories that neatly mimic conventional ideas about reality to ideological cultural conservatism: “Communities repeat their central myths, the stories that make them a ‘cult” and give them an identity, in order to provide a sense of social continuity.” You say this as a bad thing. Why? What do you propose instead?
The word for the Romantic tradition is discontinuity, not continuity. Make it new, as Ezra Pound put it for the Imagists. Unlike music, the literary world has been captured by what I call Capitalist Realism. Literary realism is in harmony with our tendency to think in empirical, causal terms. For the moment, this aesthetic has essentially captured the field. But it wasn’t so long ago, during the heyday of American postmodernism, when there was non-realist fiction galore in writers like Donald Barthelme, Robert Coover and John Barth. No one even talks about these guys now, famous though they once were, never mind the hundreds of likeminded writers who worked in their shadows. American writers are expected to do domestic realism, and if they don’t they’ll find it difficult to publish. “Serious” fiction is for a small number of writers and readers, sort of like opera or the local quilting club. But the tradition of discontinuous fiction is long, old and distinguished—Rabelais, Sterne, Cervantes, Boccaccio at the origin. It is not dead, but it has been severely oppressed.

What kind of social and aesthetic movement do we need now?
I argue, in a recent essay, against the effectiveness of mass movements because 1) they depend upon the assumption of a “we,” as in “we the people,” that doesn’t exist; 2) when “men of the people” are elected, they usually betray their own electorate; and 3) mass movements when successful are likely to be bloody because the factions share few values and often actively hate the opposition (every socialist should know that the Bundys of the world have guns). So, as far as I’m concerned, mass movements that seek to transform the political system as a whole are hopeless, and revolution is the worst expression of these fateful ironies.

I think the alternative is one that is never even mentioned these days: the politics of refusal, non-participation, a strategic and fragmented wandering away from the roles, politics, social institutions of the dominant culture. In other words, countercultures. That doesn’t mean you have to be a hippy. It means you try to participate in a sub-culture that is as much apart from the reigning orthodoxies as possible. Since the Romantics, artists have been the best at this, hence the urban scenes they create that attract many likeminded people. More humbly, the locavore, farm to table, farmer’s market communities springing up all over the country are a sub-culture to industrial agriculture and food production. They make it possible to not participate in that poisonous and brutal aspect of the dominant culture. And once people start thinking in that way, it becomes contagious, attracting ever more people, ever enlarging the perimeter of the movement.

The Italian Autonomia movement in the ’70s based their work on this slogan, “Refuse Work.” Don’t take your place in an oppressive order. Do something else. Socialize your intuitions. As Fichte said, “You are free. Live like it.”