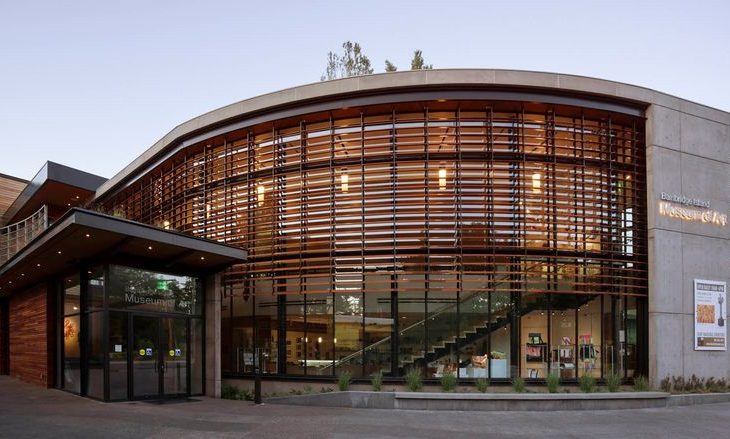 There were no visitors left in the halls of the Bainbridge Island Museum of Art. Sheila Hughes had been working late during her first week as the museum’s executive director when she decided to walk up the wooden stairs, the summer sun still gleaming through the wide glass that follows the curve of the museum’s water-facing front.

She entered a room at the back of the gallery where celebrated Seattle artist Barbara Earl Thomas had created a sanctuary of hanging paper cuttings and poems. Tears welled up in Hughes’ eyes.

“I was overwhelmed with the idea that I could be this lucky, to be able to work in a place that shows powerful work like this,” she recalls.

When local arts patron and collector Cynthia Sears started dreaming up BIMA some 10 years ago after she’d moved to Bainbridge Island in 1989, she envisioned a place to showcase the breadth of the local arts and crafts scene. At the time, there was no museum for contemporary art on the island or nearby Kitsap and Olympic Peninsulas. Since the opening of the Matthew Coates-designed building in 2013, the museum has filled that void. In its fifth year, BIMA is cranking up the heat with the debut of a new interdisciplinary festival, Momentum, and a sweeping show by ceramic sculptor George Rodriguez.

“When we opened, we left in a running sprint while still getting our legs under us,” says chief curator Greg Robinson, who came on board in 2010. Until Hughes became executive director, Robinson served in a combination of both roles. “Now we have the resources to work longer-term. I can start talking to artists about shows a year or two in advance, which allows them to create new work and do things they haven’t done before.”

After three years at the Capitol Hill cultural center Gage Academy, Hughes joined BIMA in the summer of 2016. When she stood among Thomas’ paper cuttings, she felt like everything had come full circle. She had befriended Thomas decades earlier, when the artist was involved with Bumbershoot, which Hughes helped produce while serving as COO of One Reel.

When she speaks, Hughes often breaks into a natural, warm laugh. With every sentence, she exudes energy. “I felt the museum wasn’t really fully animated,” she says, noting its 100-seat Buxton Auditorium. “Running One Reel burned into my brain the idea that a stage is a terrible thing to waste.”

Over the past years, the museum has expanded its interdisciplinary programming of lectures, concerts and movies. Within/Earshot, a jazz-themed festival, launched last October in conjunction with Seattle’s Earshot festival and included a jazz-themed exhibition, concerts and jazz history lectures. A second run of the festival is planned for this fall.

Meanwhile, Robinson has been mounting relevant, timely shows such as a group exhibition of black-and-white photography from female photographers and a show dedicated to Native artists. He also curated Guardian, the first solo show in the Pacific Northwest of Texas-born ceramic sculptor George Rodriguez. Opening March 10, the exhibition speaks to the experiences of immigrants, political refugees and other marginalized communities.

Momentum, a new month-long festival of music, spoken word and poetry, will accompany the show and runs from March 20 to April 25. With guests such as Nikkita Oliver, who will perform spoken word, Jane Richlovsky, whose lecture is called “When Artists Get Together They Talk About Real Estate,” and Dr. Daudi Abe, who will talk about the history of hip-hop in the Northwest, the lineup feels refreshingly edgy. “That was the idea,” says Hughes.

“Something fresh for the spring—and for the museum. This cross-pollination lets air into this ecosystem. It’s about making sure people know that this isn’t just a sleepy, small-town museum.”