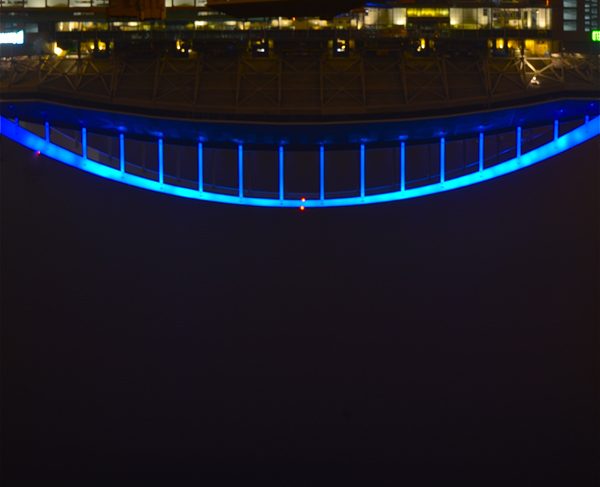 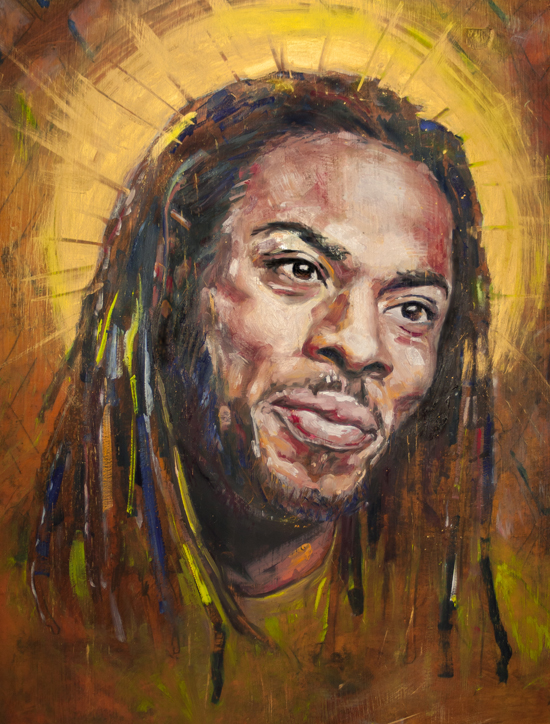 It’s no secret that artists have feelings about sports. Like, feelings. Whether they hate the way money is spent or love the community it fosters, they aren’t afraid to let you know on which side of the fandom equation they fall. Here’s what some Seattle artists are feeling on this eve of our Seahawks Super Bowl.

PAUL KOMADA
The “Swat” by Richard Sherman during the waning moment of the NFC Championship last year against SF 49ers slipped “our” Seattle into a different Universe. The moment was so intense and sublime that I heard whole stadium fall silent for a split second. Even now, I can feel the presence of an alternate Universe where the Seahawks crumbled against Kaepernick-led Niners on their last drive. But we all know that we are on the side where magical things really happen. 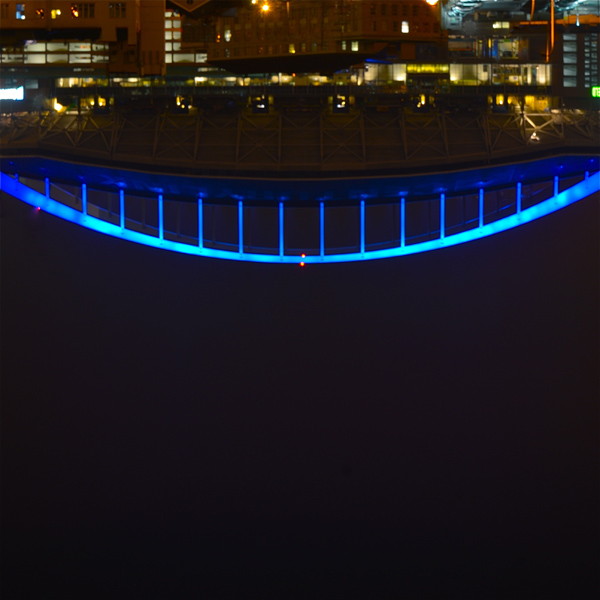 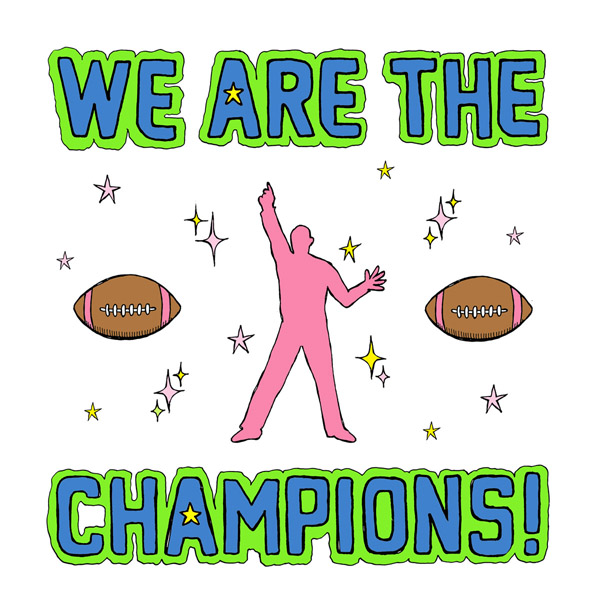 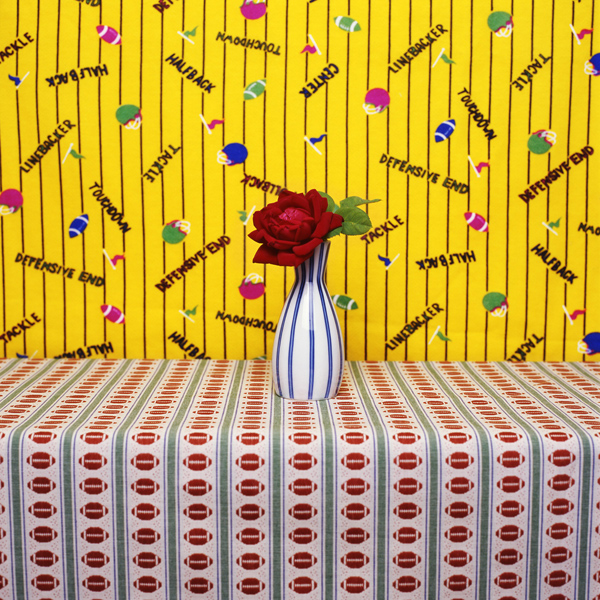 I see it as a positive for a city that is growing, and growing up. Our SPORTSBALL team is simply an extension of that growth. Historically, Seattle’s SPORTSBALL teams don’t get as far as the SEAHAWKS have, as consistently as they have. It’s fucking exciting!! People are so down on SPORTSBALL and I love to make fun of SPORTSBALL but no more than I make fun of ART and in the end it’s all the same, right? It draws a diverse population of people together who would otherwise never meet and they are having fun. That’s pretty awesome. And hey, SUPER BOWL. SUPER BOWL AGAIN. Let these SPORTSBALL fuckers have their joy. They’ve earned it. 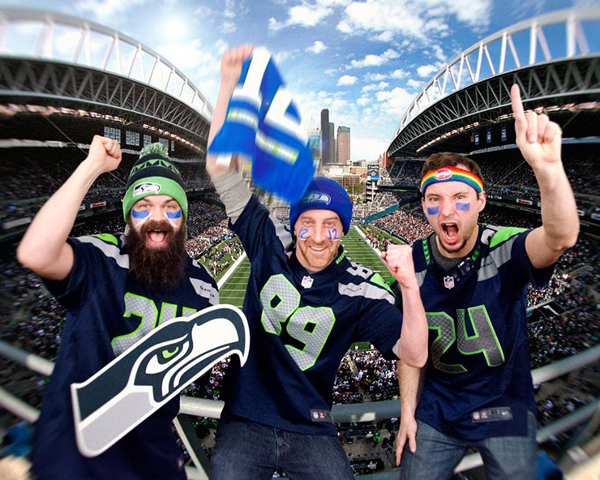 RICK ARALUCE
So, let me get this out of the way: I’m not a sports fan. Okay, when I was a kid I used to root for my home baseball team, the LA Dodgers, and my home football team, the LA Rams, but that was a long time ago. Later on, I found sports fans, even more than the games themselves, obnoxious, loud and ridiculous. Not that I was any kind of arty snob—I’m strictly working class, didn’t even attend college. In fact, I detest elitism of any form. Fuck that.

So: the Seattle Seahawks. I didn’t pay much attention to the franchise for many years. I was more interested in the Mariners. They seemed for several years to be doing really well. I attended a bunch of games after the new stadium was built, mostly because the General Director for Seattle Opera, Speight Jenkins, was a Mariners fan, and as an employee of the Opera, I’d won several raffle tickets to Speight’s box seat at Safeco. Some great games. But, as for Seattle’s football team, meh.

All that changed when the Seahawks started their climb and winning streak in 2013, culminating when they took the 2013 Conference. Everyone loves a winner. Now I was really hooked.

I was doing an art panel thingy last Super Bowl Sunday, at Seattle Pacific University. I had bought a Seahawks cap, to show my excitement, and show off my new-found team spirit. After the panel, I walked over the Fremont Bridge into town, found a bar and watched with ebullient strangers as the Hawks destroyed the much favored Denver Broncos. I could not believe the excitement I felt. This was great! WE WON!

And now they have done it AGAIN! They’re going to the Super Bowl to defend their title—AGAIN! I love these bastards. I love how you can never count these boys out. I love the spirit of the fans and my friends who are similarly hooked. I love Russell Wilson, Sherman, Marshawn, Baldwin, Pete Carroll. Think I might love Wilson the most. A total athlete, and for fuck sake he cried. On TV! How can you not get behind that?

Oh, and to the die hard fans who have stuck with the team through thick and thin from the beginning and resent all these new fair-weather fans: Get over yourselves. You sound like a bunch of lame hipsters saying you can’t like such-and-such a band because you weren’t there from the beginning when they were playing coffee houses. Fuck that, too. You don’t own the team. Don’t act like a bunch of fucking babies sucking sour grapes. Just enjoy the tide. Same goes for all yous who hate organized athletics or “Sportsball” and curse any pro ball team because blah blah blah. The obscene money. The misguided priorities. The horrid traffic around Quest Field. The whatever. Listen: this shit is history. Get with the spirit. Enjoy the hometown pride. It won’t last forever, that’s certain.

So, now, let’s make some more history and destroy New England on Sunday. 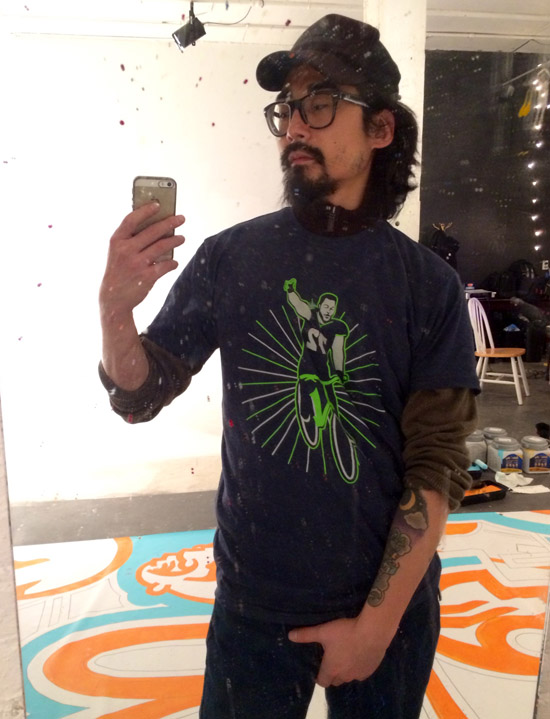 LAUREN MAX
Two photos: The first one is last year after we won the Super Bowl, partying in the streets around Capitol Hill. The second is of Naomi kissing a replica of our Vince Lombardi trophy that someone had at Bait Shop earlier this year. 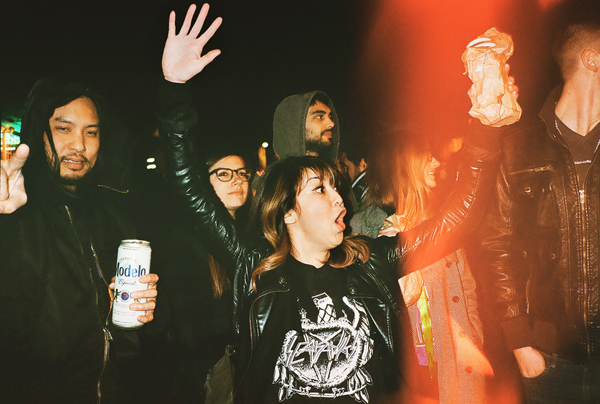 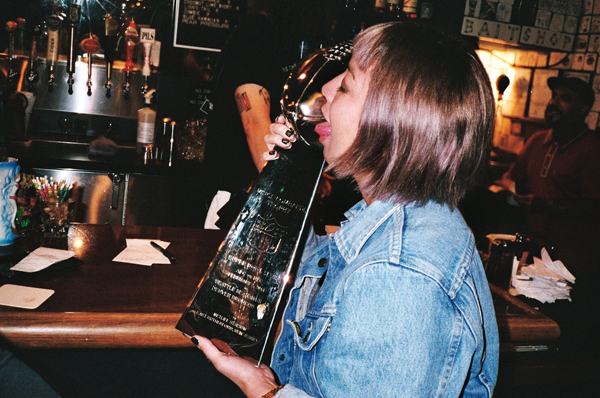 BRIAN LANE
Here are a few little ramblings, and an embarrassing early piece by the young 10 or 11 year old artist, Brian Lane.

I grew up loving sports and really honed my artistic skills making drawings of my favorite players from baseball and football cards, sports illustrated magazine and Nintendo characters. This continued into high school when I started thinking about it as more than just a hobby, but maybe a career path. I was decent at drawing, but not great, so photography and printmaking seemed like a good direction. Now my studio is approximately four blocks from the stadiums, and i just LOVE hearing the crowd cheering. I should really take advantage of all the tailgating happening right behind my studio.

I still am a big sports fan, but my art and related things take priority over watching the games on tv or in person, so I will usually listen to them on the radio.  However, last year I was watching the Super Bowl at Collins Pub (next to the Smtih Tower in Pioneer Square) and it turned out I had two US Olympians sitting next to me. How cool is that! When we won, I headed out into Pioneer Square for the next two or three hours taking pictures, and just taking it all in. It’s amazing when a city comes together like we did last year!

Sports really are the one and only thing that bring people from every spectrum of society together.

I was in New Orleans at a small neighborhood bar for the Seahawks-Packers game two weeks ago, and it turned out there were four or five other seattle people, out of a dozen folks, at this little bar 2,000 miles from home. We talked art a little bit, but the ol’ sportball was what made us friends for that day. 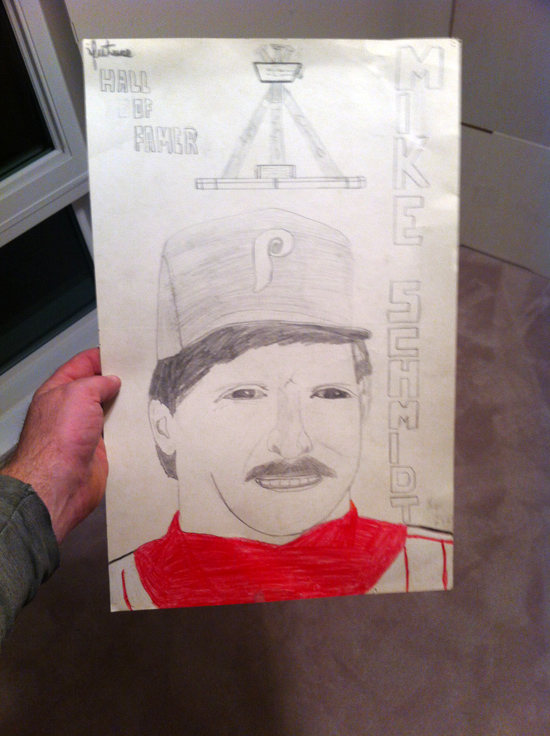 SERRAH RUSSELL
I definitely wouldn’t consider myself to be a sporty person (the only organized athleticism I ever participated in was t-ball when I was eight and that was the end of it!) but I am definitely a fan of Seattle and love the energy that the Seahawks have brought to this city. I love the strong and varied personalities of the players, the feeling of camaraderie within the city and the look of passion and happiness on Pete Carroll’s face during a game and after a win. I think because the Seahawks have been discounted, discredited and thought of as underdogs, Seattle can connect to that experience and be motivated to prove haters wrong. This article about Pete Carroll and his coaching style was completely inspiring to me for art, life, being mindful, dedicated, etc. I think it is exciting the way that players like Richard Sherman, Marshawn Lynch and Doug Baldwin are questioning the system by drawing attention to ridiculousness within the authorities and rules of the NFL.

Most of all, I feel like the Seahawks and Pete Carroll have exhibited what sports mean vs. what they are. 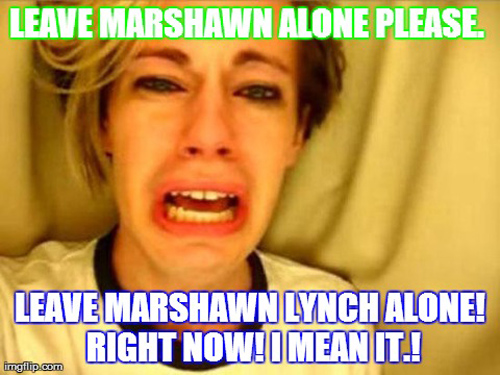 DEVON MIDORI HALE
Last year I hosted a Super Bowl party and served a bowl filled with four pounds of Skittles. Every time Beast Mode scored a touchdown, we all made it rain with Skittles. Well, that turned out to be a lot of touchdowns. I’m still finding the remnants of year-old Skittles melted to the floor in the corners of my house. This year I think I’ll save Skittle rains for the post-game walk to Pioneer Square. Here’s our homemade photo booth for Sunday: 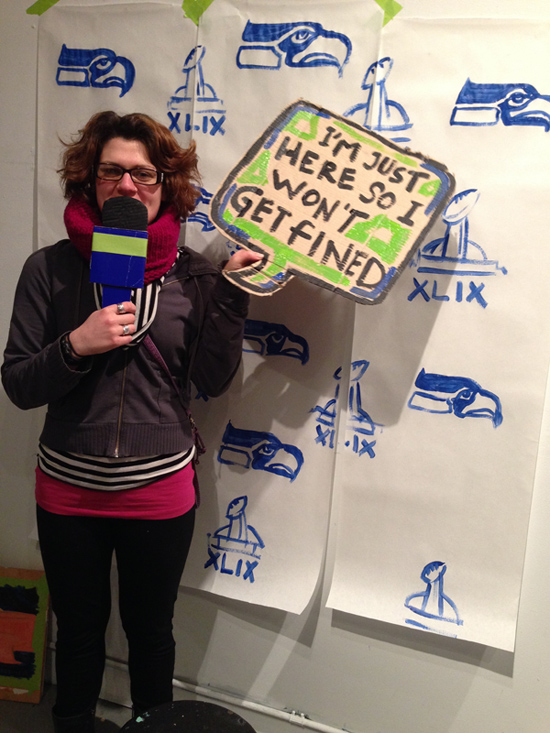 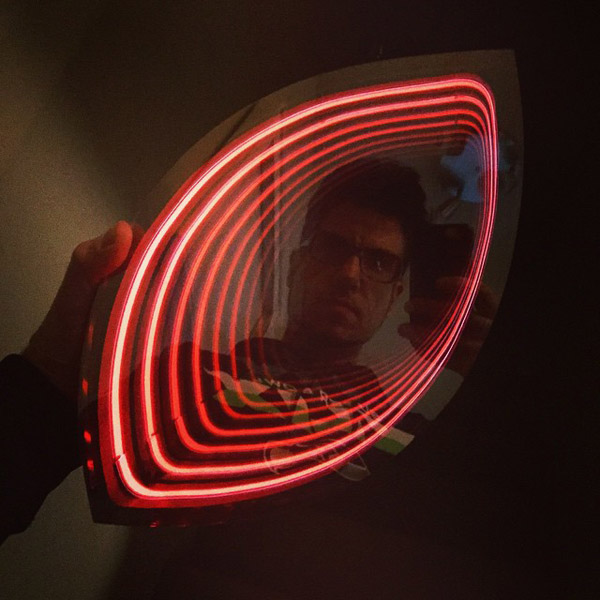 MARY ANN PETERS
My brother was a football star. I grew up normalizing machismo and a finessed tiptoe at the goal line as the epitome of cool. I watched girlfriends fawn and mothers bake like fools in appreciation. I chastised ranting fans if they insulted my brother, at 10! Football was a kind of church where the sins of the sinner could be forgiven in a split second perfect pass. It was pervasive and honorable. Now I’d have to say honorable is in question but the energy of chasing a win still gets me. Seahawks? Guaranteed entertainment on and off the field. Marshawn Lynch, my new cultural hero. If ya have to ask about my bizness ain’t none of your bizness. What’s not to love? 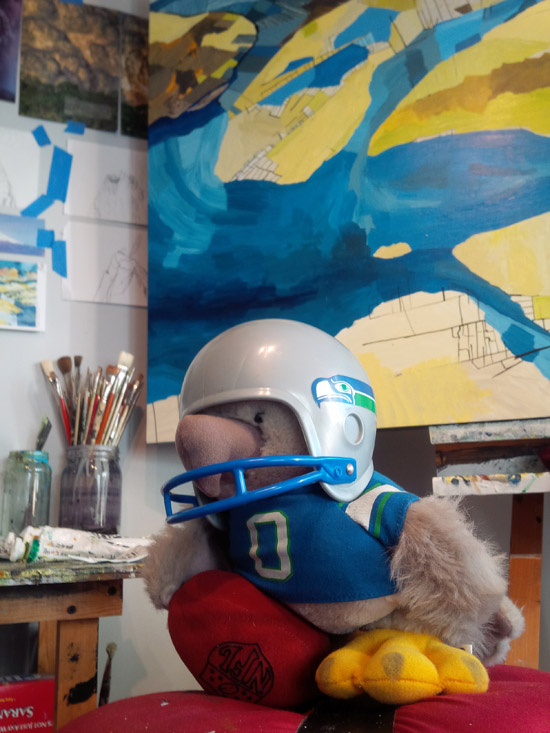