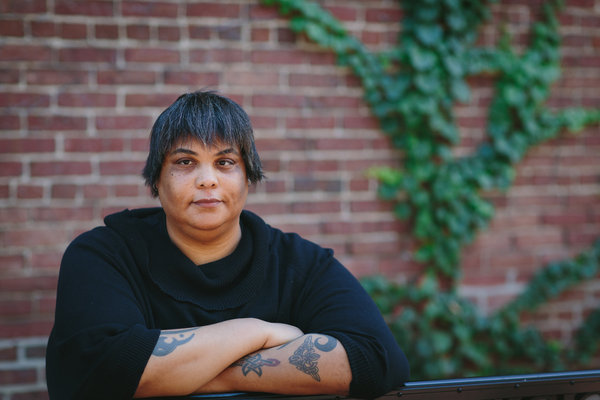 This is my first AWP, so I wasn’t sure what to expect. I’d received words of wisdom beforehand from writer friends who’d attended the conference previously: Skip the panels but attend the offsite stuff. Don’t have high expectation about making substantive connections that will advance your writing career; it’s all about soft-focus chitchat and the enjoyment of watching an impressive roster of lesser-known writers cut their teeth.

The night began with an AWP kick-off happy hour at Linda’s—hosted by A Strange Object, Electric Literature, Guernica and The Paris Review—and set a rowdy tone for the evening’s festivities. Three-dollar Dark ’n’ Stormies were flowing among conference attendees wearing neon lanyards. The AWP folk were feisty and matted from being cooped up at the Convention Center all day.

Throughout the bar, emerging and well-known writers alike let loose, spilling into the back patio, many with craned necks hoping to catch a glimpse of Lorin Stein, the inimitable editor of the Paris Review. The vibe reflected the best of the Seattle lit scene gestalt, brainy yet accessible, irreverent yet sincere. Writers swinging their literary boners around, excitedly recounting their favorite celebrity author eye-humps of the day. Chad Harbach! Annie Proulx! Breezy conversation was replete with Stranger editor Christopher Frizzelle’s offhanded mention that he’s writing a book about “feelings” and low-grade gossip about Rachel Kushner cancelling her appearance to teach at the Tin House Writer’s Conference this summer.

Up the hill at Hugo House, the Public Space event offered an unconventional format for readings: Authors fielded pre-submitted, thematic inquiries by responding with passages from their own books, such as, is it better to be kind or honest? The approach was only moderately successful, making somewhat artificial and obtuse connections to the but failing to delivermuch insight. More interesting discussion seemed to happen along the perimeter of the event as people mingled and got the opportunity to engage more deeply.

Standing on the steps of the Hugo House, I had the privilege of making small talk about student loans, Uber and rural America with the super rad novelist/essayist/editor Roxane Gay, one of my literary heroes, whose stunning command of the stage during her reading yesterday belied her shy, humble resting state. (Gay’s incisive essays for Salon are refreshing contributions to contemporary media discourse on everything from Woody Allen to Michelle Obama’s selfies, and her unique perspectives on the complex terrain of sociopolitical issues such as race and feminism go far beyond stock, prescriptive debate-speak, offering up nuanced opinions that are timely and razor-sharp, all in the powerhouse package of being a damn fine writer. And a lovely human with whom to share a breath of fresh air.)

Later in the evening, the Tin House and Wave Books party at Chop Suey made for a raucous time, although the venue was an ill fit for the remarkable line-up featuring Dorothea Lasky, Peter Mountford, Bianca Stone and Matthew Zapruder, all of whom practically had to shout over the din of revelers swarming the bar for Tumblr-sponsored free drinks. Stone, in particular, who recently illustrated Anne Carson’s translation of Sophokles’ Antigone, blew me away with a gorgeous read from her book I Saw the Devil with His Needlework. Jesus.

Jessica Mooney will be reporting on each day’s events through the AWP conference this weekend. Check back for more!