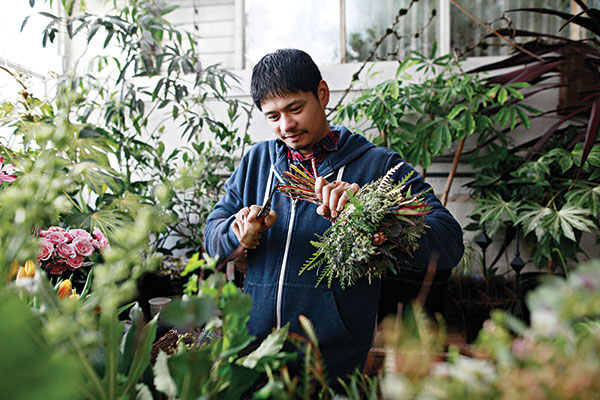 Riz Reyes in his Roosevelt greenhouse

“Horticulture is a collaboration of science and art,” says Riz Reyes, silhouetted in the verdant twilight of his greenhouse workshop. As founder and sole employee of RHR Horticulture, his landscape and floral design company, Reyes is one of Seattle’s busiest green thumbs—and one of its most expressive. He’s operated out of this glorified terrarium in the Roosevelt neighborhood for six years; the owners live across the alley and donate the space, which would otherwise go unused. At roughly 225 square feet, it’s a jungle-dense menagerie with representatives from around the world: red banana tree, flowering maple, princess flower, pincushion flower, cheflera, angel’s trumpet, hellebore (Reyes’ personal favorite).

He continues: “I’ve always liked art”—he was a dance minor at the University of Washington, the complement to his degree in environmental horticulture and urban forestry—”and the science kicked in because of my curiosity about how plants grow and function. To have the two come together is incredible.”

Plant fans can see Reyes’ living fusions at the Anderson School, the five-acre hotel and entertainment complex opened in Bothell by Portland-based McMenamins last year. As garden manager, Reyes advised the lead landscaper in planting the place’s beautiful courtyard, desert garden, indoor “lagoon” and vegetable garden. Anderson School’s robust landscaping contributes to its earthy ambiance, and even an untrained eye will attune to its breadth and depth, from dramatically gnarled trees to ecstatically splayed grasses to colorful seasonal blossoms. Reyes has cultivated plants from around the world, focusing on subtle variations of shading and wide-ranging textures, taking advantage of the Pacific Northwest’s famously propitious growing environment. He says the Anderson School, along with Edgefield Estate, McMenamins’ flagship in Troutdale, Ore., have become destinations for floraphiles.

“A garden is always changing,” he says. “What’s cool about McMenamins is they let us experiment. And it’s nice to have that venue where I have an audience.”

Check out Reyes’ work in all its elegant texture, subtle shading and intricate patterning: It’s easy to compare him to a composer with a deep understanding of his players’ gifts or a sculptor with a generous respect for his materials—not to mention a quiet but insistent desire to share his brilliance with an audience. His services are available for one-off gigs, like parties and weddings (“I live for that reaction now, giving a bride her bouquet at her wedding”). He maintains the landscaping at two private residences in Seattle and consults and advises botany students at his alma mater’s student farm and Center for Urban Horticulture, the latter of which is open to the public and tucked into the Union Bay Natural Area. He keeps a very active Instagram account.

Reyes’ most accessible—and eye-popping—display is at Trichome, the head shop-cum-lifestyle boutique in the International District. At the back of the shop is a sprawling tangle of coral-like lotus seedpods, mellifluous curlicues of woody branches, sprays of gray-green epiphytes, tiny explosions of protea flowers. It seems an alien thing.

Trichome co-owner Richard Saguin is Reyes’ cousin. When he opened the store three years ago, he asked Reyes to create something to adorn the interior. Reyes took the opportunity to bring his work to a new audience, riffing on the botanical nature of the store’s name. He updates the piece every few months.

“I don’t smoke weed,” Reyes says, “but I’ll happily do my interpretation of what it’s like to be high with a floral arrangement.”

His interest in plants took root when he was a kid, freshly arrived in Seattle from the Philippines in 1989 at seven years old. First it was the fruit at the supermarket, abundant in color and variety unlike anything he’d seen before. Adjacent the produce section in most supermarkets is the floral department.

“I picked up early on how flowers make people feel. People pick up a bouquet and smell it and smile. Or you go to the hospital and bring flowers. It took off from there.”

Like other longtime creatives in Seattle, he questions his place among rapid development and the soaring cost of living, but he recalls a lesson learned in China, during his studies abroad.