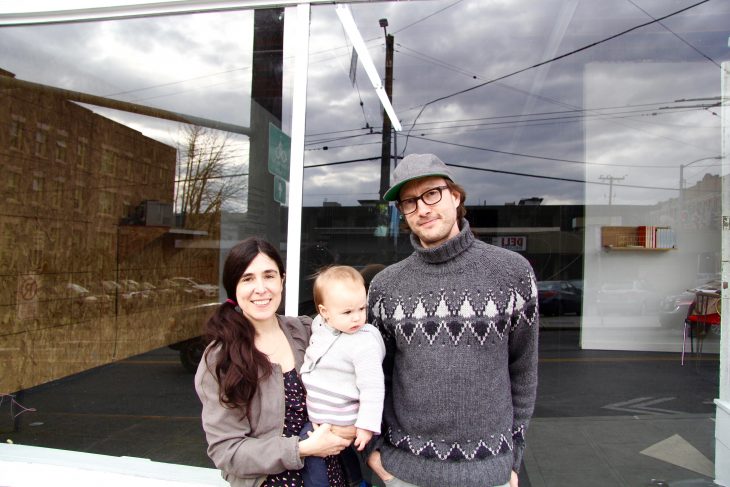 When Alejandra Salinas and Aeron Bergman opened INCA in Queen Anne three years ago, the artist couple knew they were operating on borrowed time. At some point, the corner block that houses their storefront gallery would be torn down, but they were willing to sacrifice the security that comes with a long-term contract for cheap rent and the ability to stage all kinds of avant-garde art shows. However, it turns out it’s not demolition that brings INCA to an end, but opportunities outside the city.

“We’re leaving Seattle to teach at the Pacific Northwest College of Art in Portland, where I’m the new chair of the Low-Residency MFA in Visual Studies and Alejandra joined the teaching faculty there,” Bergman says. He adds that the couple will try their hand at an INCA space there.

For a moment they considered simultaneously running a Seattle space, but with the obligations of a child and two full-time jobs it was an unwieldy and unlikely prospect to manage properly. “It’s sad to leave Seattle behind,” Bergman says, “particularly because we had a perfect place for shows and were fortunate to create a sense of community here. We’ve always felt really supported. INCA Seattle really has been a collaboration with people who contributed essential ideas, work and energy—artists like Kat Seidemann, Barrett White, Hami Bahadori, Justen Waterhouse, Ross Young, Joseph Alexander Vinson, Matt Bell and Ryan Dorsey.”

From co-creating the artistic arm of the neo-Marxist festival Red May to programming work by exciting international artists or hosting discussion groups, INCA’s programming was unparalleled in Seattle. New media artist Sondra Perry had her first solo show at INCA, then went on to show at MoMA PS1 and MoCA. (She’ll return to Seattle for a show at the Seattle Art Museum this December.)

The couple couldn’t care less about institutional affirmation of their vision. INCA worked explicitly outside the commercial/institutional art ecosystem, which is one reason why Bergman is uninterested in snubbing the Seattle art scene. “I don’t think the art world is particularly great anywhere,” Bergman says. “If you’re trying to work with values that aren’t market-based, it’s more or less the same everywhere.”

Portland is similar to Seattle, Bergman says. Cozy, bad traffic. “Maybe a bit more DIY. There’s also less of a sense of trying to make the city into an inward-gazing mini-metropolis, and accept that it’s smaller and go with that. That might be healthier because people in Portland have to reach outwards.”

Currently, Salinas and Bergman are settling on what form INCA will take in Portland alongside their INCA Press, which will continue to publish books. From the beginning the project has evolved as it moved forward—from their time in Detroit, where they ran INCA primarily as a home space for artist residencies, to its growth into a more ambitious exhibition space in Seattle.

Till their departure, INCA Seattle will stay open on Saturdays through December 9, during which their a group show about future “speculative archaeology” called Hypomnemata will be on view. For their finale show, they’re planning a duo exhibition by the couple themselves to be displayed in INCA’s windows until it shutters in January. Their working title? End Show.