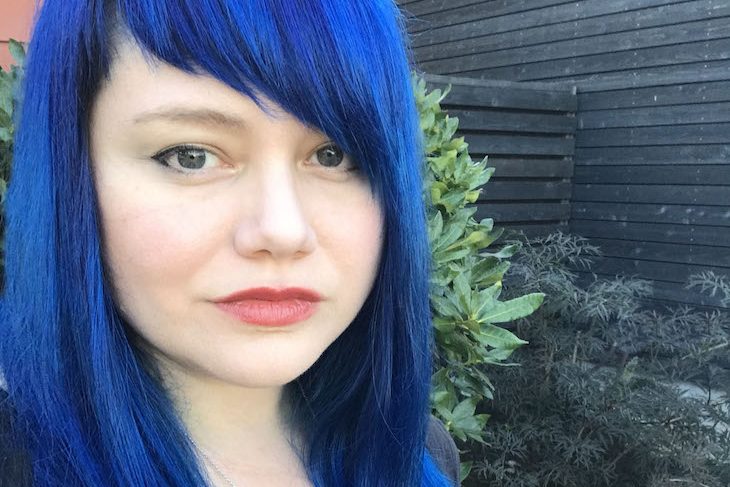 Emily Pothast opens a new gallery in the front room of her Central District home on Friday. Photo courtesy of Emily Pothast

Barely 20 minutes have passed since I stepped over the threshold of Emily Pothast’s Central District home. In this short amount of time, the visual artist, musician, curator and critic somehow found a way to talk about the political history of erasure, witchcraft, feminism and Walter Benjamin’s essay “The Work of Art in the Age of Mechanical Reproduction.” In the ensuing 30 minutes, she pulls out a print from Dürer’s Apocalypse and called it “15th-century clickbait,” plucks Leonard Shlain’s book The Alphabet Versus the Goddess from her library—“a curious book about the relationship between written language and the rise of patriarchy”— and shows me The Hour of the Witch, a reissue of a 1970s private press album by Gundella the Green Witch of Detroit, which she recently reviewed for music magazine The Wire.

Like the bookcase she pulls her books and records from, Pothast’s brain is joyfully overflowing. Until recently, so was the L-shaped, 50-square-foot room near the front of her house. Among other items, bags of old clothes, a Santa hat and a green alien mask still need to be cleaned out of the former storage room before she rechristens the space AURA, her new home gallery. AURA will open this Friday with the one-night show called Thirst by recent University of Washington MFA grad Katie Schroeder.

“I felt guilty wasting the space,” Pothast explains. “It’s a shame to let it be a closet given the high premium on real estate.”

As renters, she and her partner, David Golightly, know they won’t be staying in this house forever. Pothast is considering a PhD program elsewhere. “I’m committed to Seattle, but also might not live here much longer,” she says. So she might as well use the room.

The same thought moved her to organize sporadic art shows in the same room (then named TaRLA) after moving into the house in 2011. Now she’s commiting to a solid year of monthly programming and a new name, AURA, referring to Walter Benjamin’s idea of the irreproducible air of an artwork. “AURA is about intimacy, having an experience in a home, community building around the art as a conversation piece,” Pothast says.

Thirst is the first conversation piece. In the multimedia installation and video, Katie Schroeder references Bram Stoker’s Dracula and water and blood with their religious associations. “Katie’s from the generation where all her interactions have always been mediated through social media. She’s interested in how we negotiate desire and intimacy through those filters.”

Pothast plans to use the space not only for themes of feminism and technology but for other “small, poetic gestures” as well as installations and research-based and experimental work that’s less easily commodified.

“I’m thinking about work that has to do with community, connection, empathy, desire, shame,” Pothast says. She’s attracted to artists who imagine ways forward from our white supremacist, hetero-patriarchal capitalist culture, a sentiment she heard expressed in a talk between scholar Negarra A. Kudumu and artist duo Mwangi Hutter last year at Mariane Ibrahim Gallery.

Art, she says, can be a place of healing, a way to mend “our broken relationships with each other, our bodies, and the land.” She cites the work of queer, Indigenous multimedia artist Demian DinéYazhi’, currently on view at the Henry, as an example and hopes to bring DinéYazhi’s work to the gallery in the coming year.

Meanwhile, Pothast will also launch a podcast titled Form and Resonance, where she’ll post talks with the featured AURA artists and other conversations. Also on the calendar for this fall: a new record by her band Hair and Space Museum, officiating a queer wedding in Texas, a presentation at an academic conference in Idaho tackling racist, sexist YouTube phenomenon Jordan Peterson (the talk is called “Mother of Abominations: Dragons, Chaos, and Jordan Peterson’s Misuses of the Chthonic”) and a series of art history lectures at Gage Academy in Georgetown this fall.

Thirst opens Friday, Aug. 17 at AURA in the Central District.