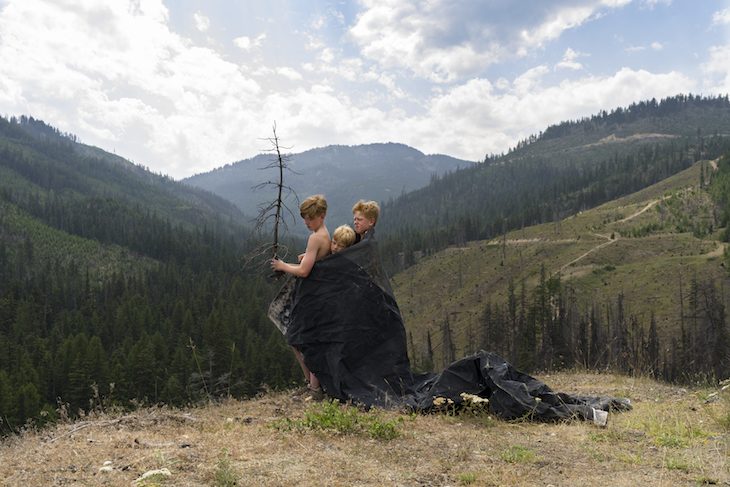 As they kick up dirt from the forest floor, it’s clear the three boys in the video belong to each other. They all wear differently hued red T-shirts, their hair is different shades of blonde. As the dust twirls, they freeze and stand still. For a couple of seconds, time is suspended.

There’s a tranquility to the scene, projected on a large screen at Glass Box gallery. If it weren’t for the blackened bark of the trees and the earth’s baldness, it’d be hard to imagine how almost exactly four years earlier, a forest fire ran its destructive course through this patch of forest near Cle Elum, Wash. Since then, Zack Bent has been going back to the barren woods with his three sons, photographing and filming them during moments of orchestrated play. The kids play and Bent, blending fiction and reality, asks them to wear costumes (hence the red shirts) or keep kicking the dirt as he films.

In the resulting exhibition of photos, films and sculptures made from overwintered tarps and blackened wood called In Memoria, on view at Glass Box until Nov. 10, we can see the kids grow into themselves just as the forest is regaining its shape.

When I meet with Bent at Glass Box to talk about the show, he immediately explains how he’s blurred the lines between his life and his art as long as he’s been making art. “I’ve been working with my sons pretty much since their birth. At one point, they were scientists, and then frontiersmen, and then scouts,” he says, raising his voice slightly over a soundtrack of woodpeckers and creaking trees coming from speakers inside a ziggurat of blackened wood. “This sculpture is a metaphor for darkness. The inescapability of violence and destruction. This site is a destructive space.”

Why did you choose the site?
I’m a forager. I went to this site because of the morel mushrooms that typically come up the year after a forest fire. So raw and beautiful. It’s dead but so alive immediately after.

The forest bears traces of violence and destruction. You’re raising three sons. How do you think about masculinity and violence?
A while ago, I made photos of my kids as scouts. Inside scouting traditions there’s—I’m sure not everyone will agree—a space in which gender roles are blurred. One of the main tests is making boys caregivers. I used this as a model to think about what it means to have a home where people heal each other and don’t just take. How can you provide them with opportunities to see themselves differently?

How do you do that?
I try to draw on the weakness of their flesh. There’s this photo of one of my kids hanging from a wooden structure used to lash horses to, or to hang a killed deer. Him hanging on it, almost like a carcass, draws your eye to the bodily, the weakness. I’m drawn to these moments of tenderness and fragility. I think that’s part of being a parent, too—watching the fragility of the flesh.

Your kids have been part of your art-making process since they were born. How does that influence them?
Sometimes, I’ll have to make rules to make clear that we’re doing this, and that it’s something else than us just playing. Our imagined lives and real lives are kind of intertwined.

Do you think the fact that a camera has followed them like this has influenced how they see you as well as the camera?
So the question is: Is this going to be part of their therapy? [laughs]

Did you think about how it will shape and has shaped part of their youth?
I do try to scrutinize the project along the way. It does shape them. But the camera shapes everyone in such a powerful way. We live in this world of image-making and reflecting of our lives, especially now that the camera is an extension of our bodies. So actually, I hope, I’m providing them a better education of how the image works. It’s more honest.

How do you view your role as a father both of them and of this narrative? How do you negotiate your power over how this and how they turn out?
As time goes on, I’m realizing more and more how much influence you have as a parent. There’s a lot of nurture. Especially in their pre-language years. And then there’s the stuff beyond that: I grew up liking baseball, so I signed them up for baseball. But a seven-year-old doesn’t sign themselves up for baseball, you know? We build their lives. They might not just decide themselves to stand on top of a hill. So yes, there’s a certain amount of power in it. Hopefully, inside of that, they have autonomy. And as they become more who they are, they’ll exert their wills more. That’s an interesting part of the process.

Are you done with this project?
I think the kids are pretty done with the site. After being there for a couple of years, I’m realizing how it is not a very pleasant place. The land’s just sitting there trying to regenerate itself, there’s nothing really fun for us to do. It’s kind of a forsaken place.

Will you go back at some point?
I may go back a couple of times, out of continuity. These videos are a journey, and I want to follow that for 10 more years. For one summer day, I’ll follow them walking down a path with the camera. And then someday I’ll stick that together: a 15-year journey of them becoming. I’m curious to see their bodies changing, and to see what happens to the site, what it looks like 10 years from now.

In Memoria runs until Nov. 10 at Glass Box, which is open for Pioneer Square Art Walk tonight.