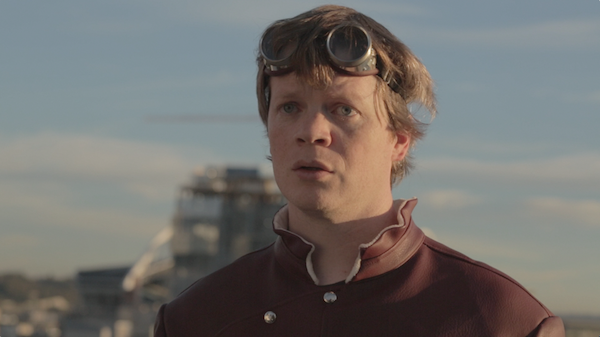 There’s some wonderful film-festival irony in the fact that one of the best locally-sourced entries of SIFF 2017 is shaping up to be a web series.

The full seven-episode arc of writer/director/animator Webster Crowell’s Rocketmen premieres as a single festival feature May 25, May 28 and June 5. Don’t let its ostensibly modest web-series pedigree scare you off: Crowell’s long-awaited (seven years in the making) saga about a group of government-employed, working-stiff rocketeers is a very special, singular vision that combines pulp sci-fi touches, dry wit, errant silliness, topicality and a welcome dose of the director’s handcrafted stop-motion animation into an entertaining and ambitious whole.

Some of Seattle’s best stage and film actors breathe life into Crowell’s very sharp script, and Ian Fraser, one of those actors, owns the role of slightly dim but lovable rocketeer Max. The character could descend into caricature, but Fraser’s funny, unaffected work provides some of the series’ highlights.

Fraser talked to us about his recruitment as a rocket-powered hero, acting on camera versus on a theatre stage, and those nifty Rocketman uniforms.

You’re a seasoned theatre actor here in Seattle, but this is your first significant film/TV credit. What was the learning curve like, acting for a camera vs. acting for an audience?
The biggest difference on camera I found is how much more still, precise and small you have to be. Audiences in live theatre don’t sit three feet from your face and they can let their eyes wander all over the stage. But the camera, not always, but often, just stares in one spot or path and can be super close, so you have to keep the performance in that little square. And you’re well mic’ed, so you don’t need to project to the back rows. Rocketmen, honestly, is me trying to be small. I’m not really super-subtle performing on stage, and it’s even more of a challenge on camera.

Give me your take on the character of Max.
Max may have banged his head on some things, but I think it’s because he’s open to barreling into new experiences, no qualms about diving in, headfirst. He’s just doing his job. Not in a humble, heroic, “Just doing my job, ma’am” kind of way, but more “I clocked in. They said I’m supposed to fly toward that thing. Cool, I’ll do that, then it’ll be lunch soon.” He keeps it earnest and friendly-like, until he gets pushed, then he’ll take steps to do what’s right.

Movies with special effects usually have to be precisely constructed, but Rocketmen also has a free-wheeling quality in places. Did you get to improvise at all?
Not really. We needed to get the lovely words from Web’s script in, and everything was on a pretty tight timeline. In the office scene, there was a bit where they had me play with an electric pencil sharpener while I waited for an executive to arrive. I goofed around a lot and found some childlike joy in the noise and the sharpening. I think it all was cut from the final film, but if Rocketmen was about pencil-sharpening, that bit would have been in!

The uniforms are very retro-cool. Did you find that the uniform informed your performance?
Yeah! it’s pretty neat putting on the jackets. There’s the feeling you get putting on a uniform, like you’re part of something official. It was like putting on a piece of a legacy, which fits nicely into some themes and the longevity of the Rocketmen program [in the series].

How intensive was your interaction with the special effects work?
We all got to do some green screen so we could be isolated and animated if needed, and at one point I am holding onto a rogue rocket, so there was some dangling of my feet from a beam, and pretend rocket hanging. No huge harness or anything though, thankfully.

You’re a father of five-year-old twins. Were there any issues juggling a family while you were playing a Rocketman?
I’m a sucker for stability, so I have to balance it with my day job. I’m also a sucker for my kids, so it’s hard for me to take long stretches of time away from them. I was glad Rocketmen was pretty easy to juggle—I got my stuff done in just a few days.

I’m going to take the girls to a screening. Hopefully there’s nothing in there I’ve forgotten about, that a five-year-old can’t handle, or any words they’ll say over and over again in school the next day. I’ll send some Peril Response Forms in with them to hand to their teachers, in case anything gets out of hand.