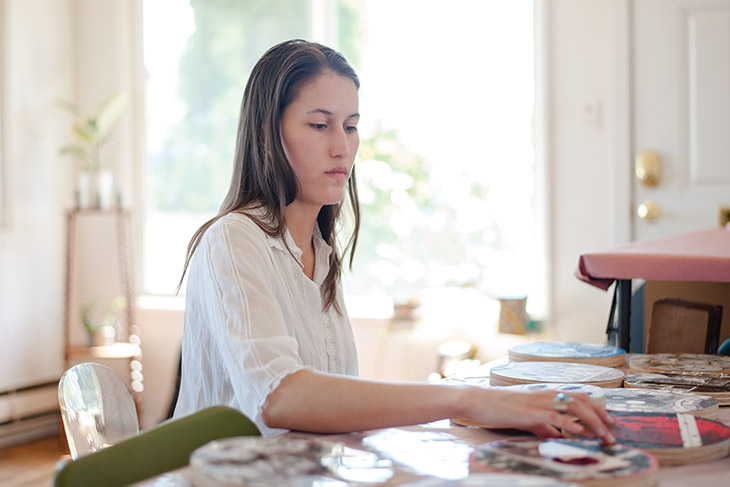 Asia Tail in her home studio. Photo by Elizabeth Crook

As told to Gemma Wilson

Asia Tail is a visual artist, curator and an enrolled citizen of the Cherokee Nation of Oklahoma.

A lot of us went out to New York and are now trickling back. Chris [Jordan] and Kenji [Stoll], we all went to Tacoma School of the Arts together. The high school was downtown, so we felt like part of the community even early on. That was something that stuck with me, and probably a lot of us—this idea of contributing back to the place that raised me.

Even when I was younger, the city was changing. There’re older folks who talk about tides of change, or the promise of change—it’s always been Tacoma’s on the crest of this wave and everything’s about to be different and then it never really happened. But there’s always been change: This is Puyallup land originally, and now it’s not, so it doesn’t seem like a new kind of change. It’s just another wave of new people coming. As typically happens, it’s mostly creative people moving first, so at least that’s growing our community in a positive and interesting way. Tracy Rector and RYAN! Feddersen just moved to Tacoma, so that’s exciting for me, from a Native arts lens, to have some new folks invigorating things, bringing new perspectives.

Tacoma still feels like a rich place where you can make things happen. A big moment for me was the [2017] Standing Rock fundraiser show, Protect the Sacred. I had the community support and the network, so I grew it in the very grassroots, slapdash way that actually works in Tacoma. It was a big show, 26 artists, and it was my first time not having a big institution behind me, so having the community say “yes” was huge.

I couldn’t afford to go to Standing Rock, but I remember the angst of the time, wanting to be there, wanting to feel part of this wave of Indigenous activism. Being an artist and someone who believes in art as a means of societal impact, [the show] seemed natural to me. It was a big moment not just for me, but also having a big, contemporary Native show in Tacoma had implications beyond the fundraising that, in hindsight, were really important. I’d identified as an artist and arts administrator, but artist as organizer didn’t occur to me until then.

As part of the [City of Tacoma’s Office of Arts & Cultural Vitality], I’m exposed to more of the landscape than I was before. We’ve recently funded a few artists’ very first permanent public artworks. There’s a strong focus on local artists—the local artists who have been here for decades and the local artists who are newer but excited about Tacoma. Obviously there are always concerns about displacement and a desire to value folks who started things here who are from here. But as people stick around and invest locally, there’s trust building. It’s important to have different voices represented and different spaces to show artwork, to have more artists in the pool. A community that features the same people over and over makes me nervous, so I don’t think that competition is necessarily a bad thing. As long as we’re cognizant of the balance of who’s been here and who hasn’t been here, I’m hopeful and interested in what will occur.