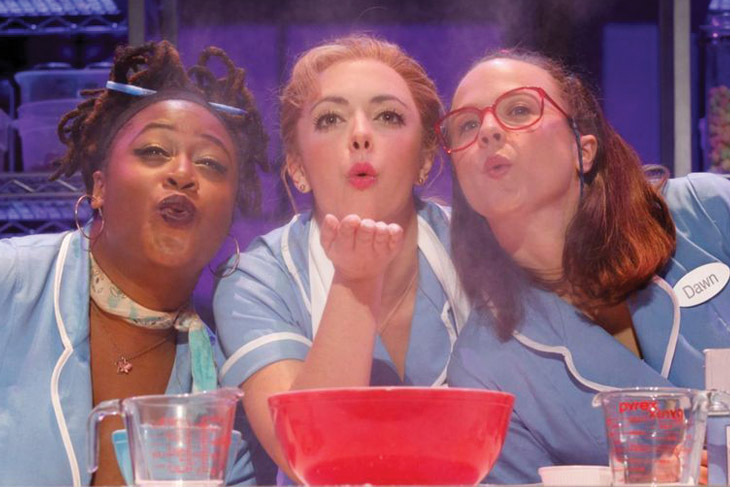 Waitress
Sugar, butter, flour: Until someone works up the capital to adapt American Pie and/or Twin Peaks for the stage (don’t kid yourself, someone’s probably already written them), the sweet-hearted Waitress reigns supreme as the most pie-centric Broadway musical. Based on the 2007 Keri Russell film of the same name, Waitress’s high-profile Broadway adaptation opened in 2016 and is still running, with a score by Grammy-nominated singer/songwriter Sara Bareilles and direction by Tony winner Diane Paulus. Jenna—lonely in her abusive marriage, pregnant and working at a diner—pours all her pain and frustration into making and naming her impressive pies, until a new man in town renews her hope for the future.
Sept. 11—16 / Paramount Theatre

Legally Blonde
Alexandria Henderson, a vocal powerhouse and charmer in shows like Hairspray and Dreamgirls at Village Theatre, stars as Elle Woods, the role made famous by Reese Witherspoon in the original 2001 film. When Woods, a pink-obsessed, Chihuahua-loving sorority princess, gets dumped by her boyfriend, she decides that her best plan of post-heartbreak is to follow him to Harvard Law School and get him back. Turns out (surprise!) he’s an arrogant jerk, but not to worry: Elle finds friends, a new man, her real self and her true legal calling in Cambridge. Come for the chipper, cheery numbers, stay to see if the show still works considering how much society’s gender norms have changed since it opened on Broadway in 2007.
Sept. 22–30 / Cornish Playhouse

Matilda
In the hands of composer/lyricist Tim Minchin and bookwriter Dennis Kelly, Roald Dahl’s beloved book about an unloved, bookish and telekinetic youngster—later a popular 1996 film starring Mara Wilson, Danny DeVito and Rhea Perlman—became a Broadway sensation, and the latest addition to the roster of good-for-kids shows that are also, you know, good. At its center, young Matilda Wormwood, belittled at home and persecuted at school by the cruel Miss Trunchbull. She finds a protector in the sweet Miss Honey, but ultimately learns to take her life into her own hands.
Nov. 8–Dec. 30 / Village Theatre Issaquah

Jane Eyre(s)
This season we have not one but two adaptations of Charlotte Brontë’s 1847 novel on local stages. (Yes, Jane Eyre is certainly a book first and a movie second, but as the novel it has more than a dozen English-language film adaptations—from Joan Fontaine and Orson Welles in 1943 to Mia Wasikowska and Michael Fassbender in 2011.) For those of you who have neither read nor seen this English-class fave, here we go: Our titular heroine, who lives with her abusive aunt and cousins after being orphaned, ends up as a young woman working as a governess in Thornfield Hall and later falls in love with the mysterious, tormented master of the house, Mr. Rochester. Remarkably, Jane Eyre is both a melodramatic Gothic romance—dramatic deaths, monstrous lies, one woman hidden in the attic, another competing for Rochester’s affections—and an early seed of feminist literature.

At Book-It Repertory Theatre, Julie Beckman’s 2001 adaptation of Jane Eyre is being revived, directed by Beckman and starring Mi Kang in the title role and Ross Destiche as Rochester.
Sept. 13–Oct. 14 / Center Theatre at the Armory

ArtsWest presents a chamber version of the 2000, Tony-nominated Broadway musical adaptation, with music and lyrics by Paul Gordon and a book and additional lyrics by John Caird, co-adaptor and director of the English version of musical behemoth Les Miserables.
Nov. 15–Dec. 23 / ArtsWest