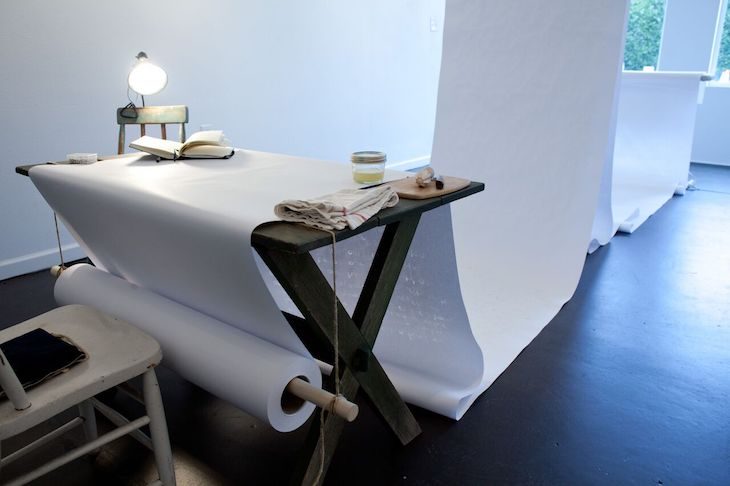 Every Sunday morning the elders of the First Presbyterian Church of Seattle serve communion at a plain iron and glass table in the chapel. When the skies are clear, light shines through the round stained glass window, depicting Jesus and the Lamb of God. Today, a rainy Thursday, artist Hanita Schwartz and curator-musician Gabriel Molinaro stand in front of the table, absorbed in a rather unusual discussion.

“The music stand is rather minimalist,” Molinaro says. “What about a pulpit?” Schwartz can barely contain her excitement about the possibility of deploying a pulpit as pedestal for her artwork, an open book on which she plans to project her video “Relicaptyia.” The clip shows her hands flipping the pages of another book, a survey of 19th– and 20th-century art that she’s spent the last three years erasing by abrading its pages with a cleaning agent.

On March 30—Good Friday—the chapel will form the backdrop of a one-night group exhibition about just that: erasure. Molinaro, a co-pastor with the Seattle Sanctuary Church and a member of Seattle bands Health & Wellness, Motopony and the bi-coastal “queer folk-quartet” Tenderfoot,  curated the show at the request of the church.

Former Tenderfoot member Jackie An will create a live experimental soundscape, a soundtrack for work by visual artists Schwartz, Serrah Russell, Barry Johnson (full disclosure: Johnson is digital engagement specialist at City Arts), Naima Lowe and Anne de Marcken. Though disparate in intensity and perspective, their pieces display a reflection on loss, mourning and invisibility. As an Israeli-born artist, Schwartz aims to raise questions about interpretation and canonical knowledge. The stark videos of Black, queer artist and educator Naima Lowe touch on the particular mourning, abjection and dislocation of the Black body. Interdisciplinary artist Anne de Marcken leans on the present but invisible status of the shelter below the chapel, where Compass Housing Alliance provides 100 beds. De Marcken scribed conversations with the shelter’s residents in lemon juice over long scrolls stretched out on the floor. Visitors will be able to uncover the writing by ironing the scrolls.

Molinaro adds that the artists are respecting the place and its sacredness. He’s careful to avoid gimmicks. Before he speaks, he stalls to think by audibly drawing in his breath, like a reverse sigh. “At the same time, we can’t stage an exhibition in a church without being critical of the structure itself, and who it was built by and for,” he says. “Both the pulpit and the Bible have been used to render people invisible.”

Good Friday, the solemn Christian Holiday commemorating Jesus Christ’s crucifixion, initiated Molinaro’s contemplation of the show. “I started thinking about the historical  figure of Jesus, a lower-class member of an oppressed ethnic minority who’s the victim of a messed-up justice system,” he says. “To me, it became a story about erasure.”

What he didn’t realize when he crafted his exhibition statement was that he was co-opting the term erasure—and perhaps simultaneously erasing the church’s complicity in it. “I got called out on my use of the term,” he says. “I realize now that Good Friday is not the main thing. Listening to these artists and their stories is.”

The church purports that God cares for the marginalized and oppressed, but it often misses the mark in practical terms, says Molinaro. It’s a disconnect he, a “white male pastor guy,” and progressive wings of the church grapple with. “I grew up in a conservative church culture, which is easy to criticize. But the progressive church can be just as screwed up. Same for Seattle progressiveness in general.”

He’s silent for a second, sighs. “The word ‘reconciliation’ gets thrown around a lot when it comes to social justice, especially in progressive church circles,” he says. “But it’s been cheapened to skip over acknowledging the truth. We can’t move on to reconciliation yet. First, there’s listening and answering to be done. That’s what I’m hoping to do with this show: To not move past erasure and the church’s complicity in it too quickly. Show a real act of real listening.”

You Do Not Disappear runs from 7–9 p.m. on Friday, March 30 in the chapel of the First Presbyterian Church of Seattle. More info here.