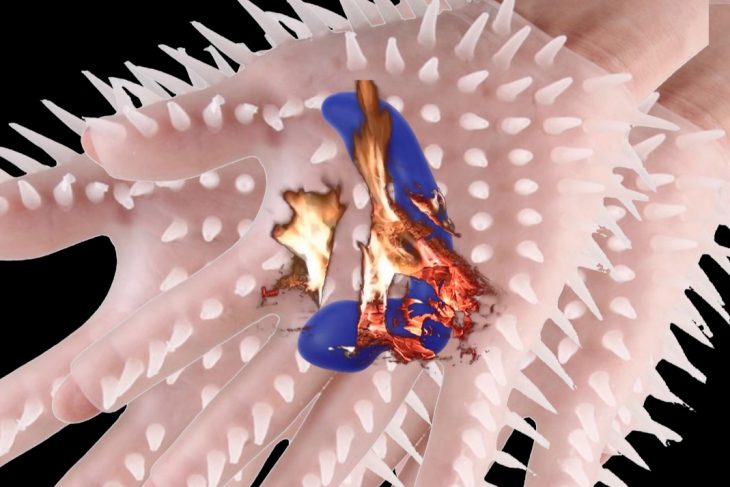 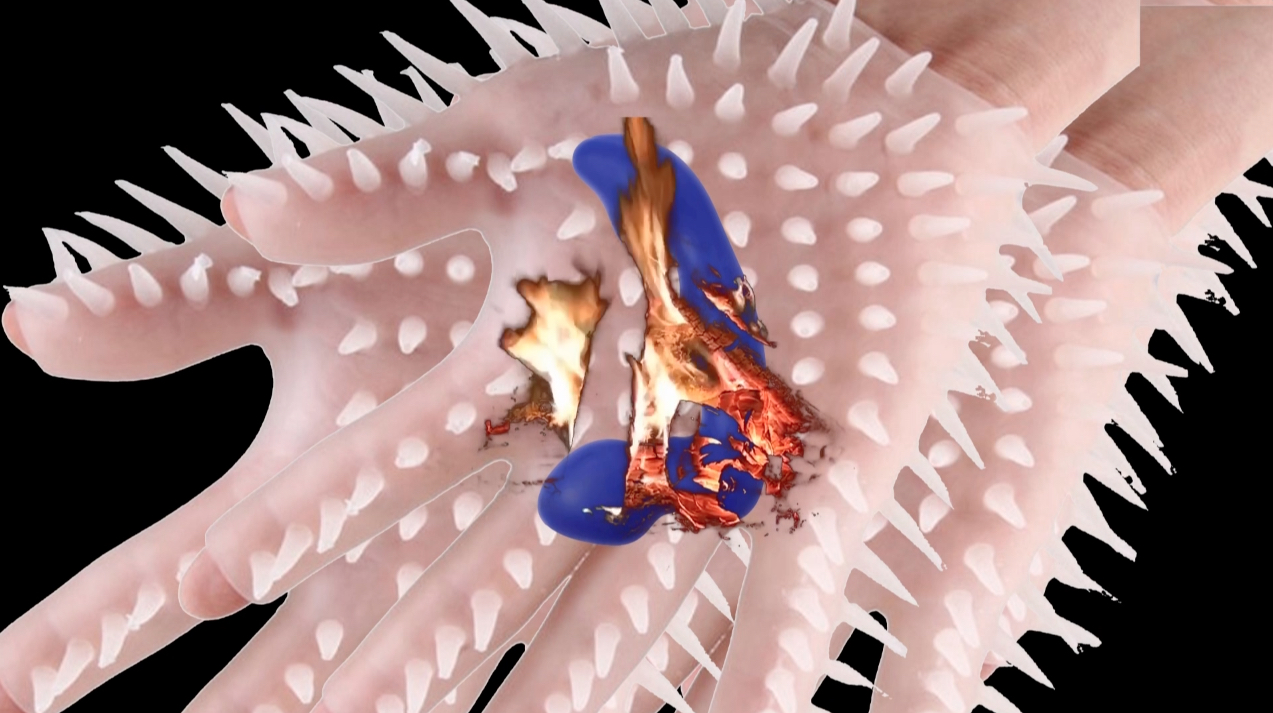 Close your eyes and think about the Amazon—the South-American rainforest one. Which descriptors come to mind? Lush? Majestic? Unspoiled?

For German film director Werner Herzog, the jungle invokes nothing of the sort. “Nature is violent,” he says with an accent thick as his brown moustache. “There’s nothing erotical, but fornication, asphyxiation, choking and fighting for survival, no real harmony but one of overwhelming and collective murder.” It’s a clip from Burden of Dreams, displayed on a small tablet near the entrance of SOIL Gallery. Burden of Dreams is a making-of style documentary from 1982 that followed Herzog during the turbulent and over-budget production of Fitzcarraldo. During filming, Herzog fought the forest to tell the story of a rubber baron hell-bent on hauling a ship over a mountain in the Amazon basin—and, like his protagonist, was heavily criticized for exploiting the indigenous population.

This problematic clip forms the thematic axis of the group show Each Eats Its Own. Exploring the age-old trope of man vs. nature, the exhibit uses Herzog’s nihilism as a prompt to address interweaving topics of representation, violence, sex, consumption, colonialism and compassion. The viewer’s reaction to Herzog’s blunt view of nature is key to understanding the show, and the three artists—Seattle-based Ben Hirschkoff and Dakota Gearhart and Oakland-based Adrienne Heloise—use it to tease viewers’ reactions, asking hard questions about idealized storytelling and exploitation.

Hirschkoff started exploring these themes over a year ago with Gearhart and Heloise. “The original idea was to do something with cannibalism,” he says. “I did something with human limbs. I didn’t like it at all.” Instead, he began tinkering with perceptions of nature, positing that we’ve never been able to really see nature, or the world, outside of ourselves and what we might take from it. With its profusion of shiny, tangled tree branches, “Jungle Heart” toys with that perception. The piece comprises a forest-like installation that branches throughout the front half of the space. 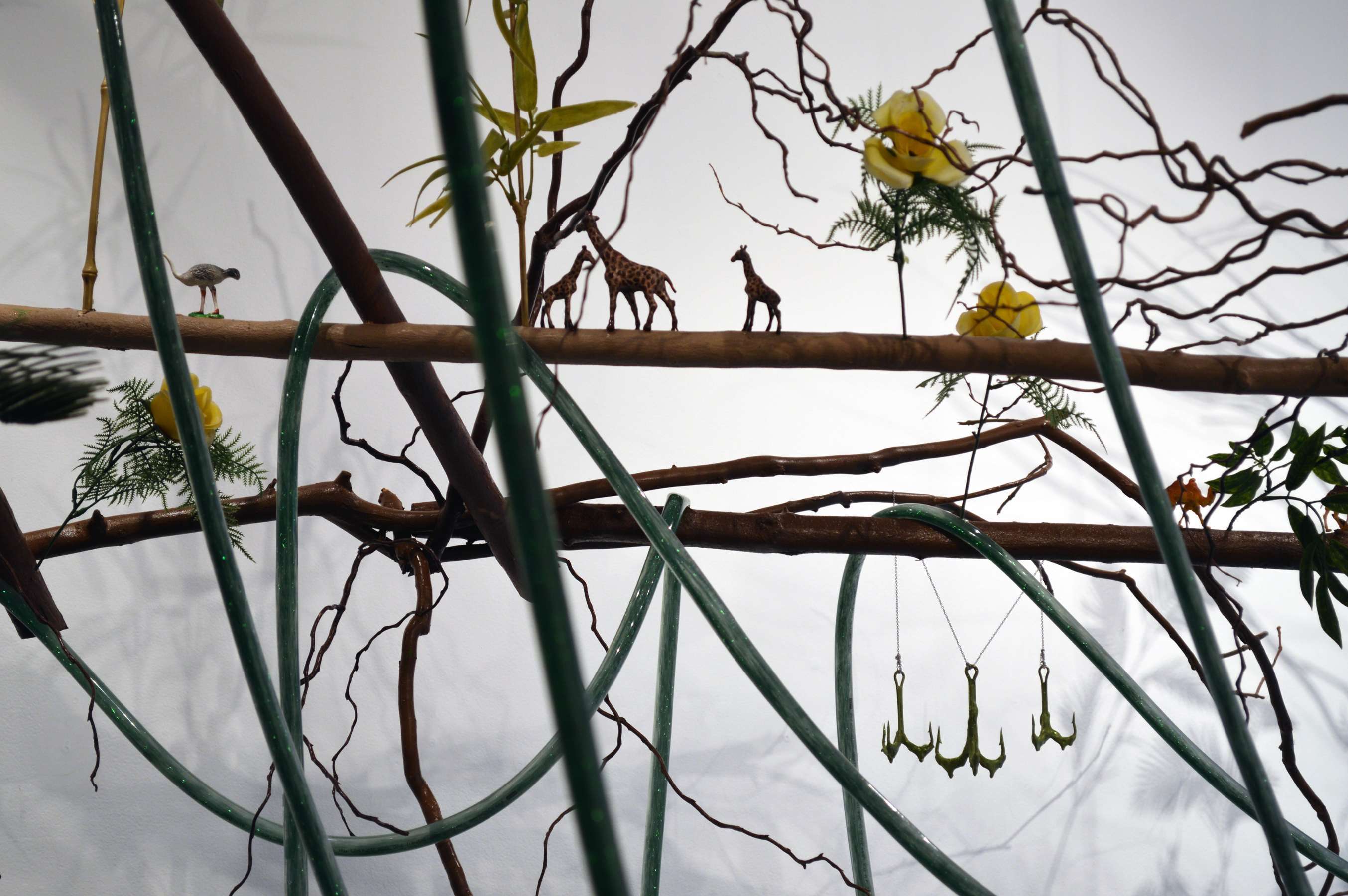 Vinyl tubing drapes over the sculpture like jungle lianas. A green glittery fluid pumps through the transparent tubes like blood through veins. It serves as a shiny distraction, as are the fake flowers and miniature animals perched on and marching across branches, a rubbery simulacrum of nature. The catch: The branches are in fact real tree limbs, gathered from Hirschkoff’s back yard after a storm. To lend them a tone of artificiality, he painted them in colors of various human skin tones, a nod to colonial violence rife in Joseph Conrad’s Heart of Darkness, which also resonates in Herzog’s commentary. Under the belly of the glittering ecosystem, glittering green knives and jagged fish treble hooks weight the suspended diorama.

This idea of perpetrators and violence echoes in the other artists’ work. The wild foliage of “Jungle Heart” reappears in Heloise’s dense collages on panel. In them, intricate cutouts in the style of ancient hunting tapestries and Medieval heraldry fuse with foliage, reminiscent of Kehinde Wiley’s floral wallpaper. The foliage-wallpaper bursts with sentimentality but almost overwhelms, constricting and binding with violent, unchecked growth. 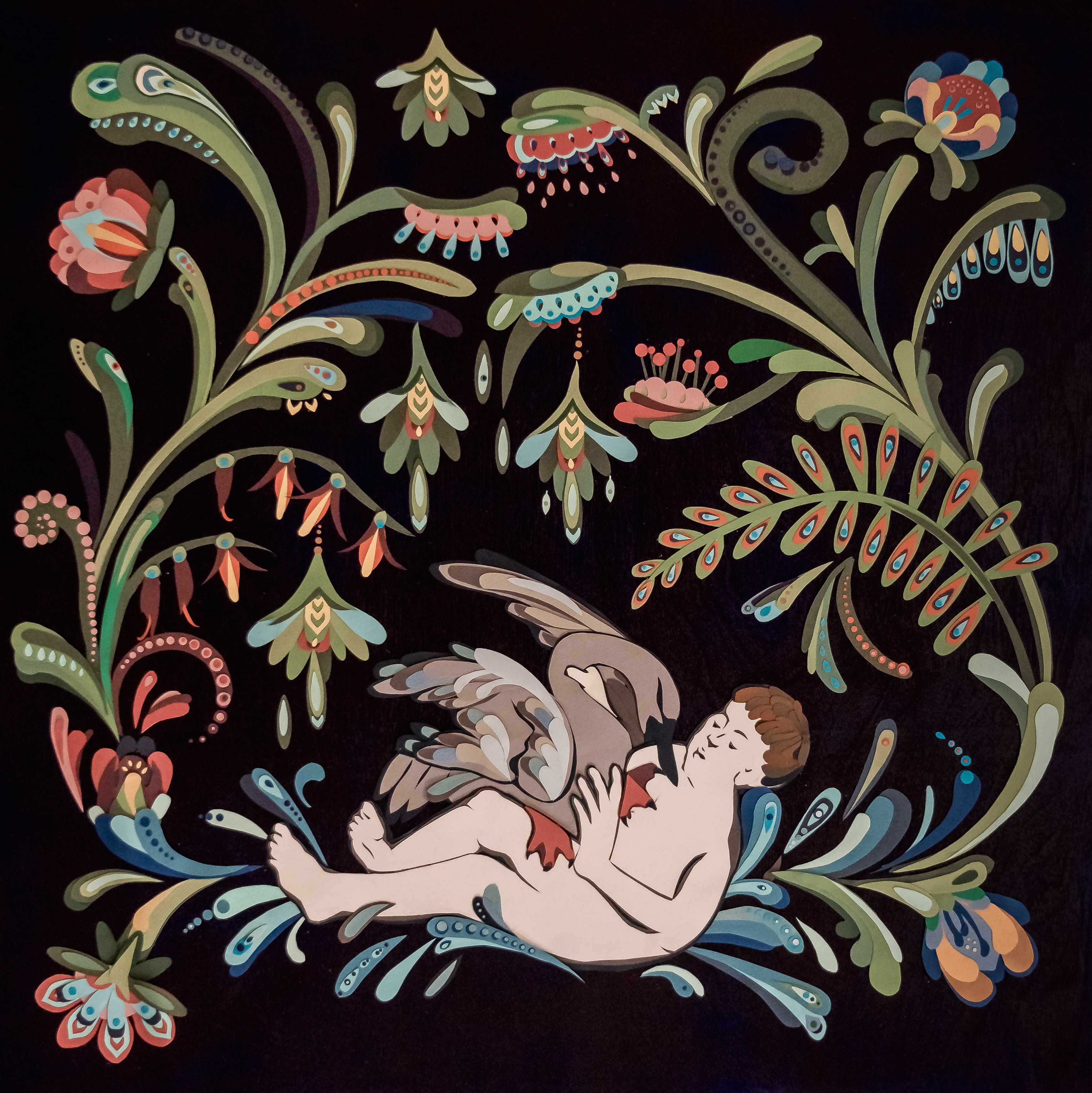 Heloise’s universe is also populated by wolves, bears and swans, locked in violent struggle with humans, marking continually frustrated attempts at connection. In “Swan Bait”—a nod to the myth of Leda—the struggle morphs into a sexual act that conjures both anxiety and affection.

Projected onto the back walls of the gallery, Gearhart’s videos are the uncanny icing on this layer cake of ideas. To see the videos unfold in the small space, the viewer must spin around, which in turns amplifies the near-nauseating effect of the graphic footage. In one film, two pairs of hands use razors to cut holes in soft-shelled eggs. The fingers probe and punch the holes until blood and slime merge and baby pythons slither out. Gearhart collected the found footage—an informational film—from a pet shop on the Internet. To mediate the scene’s graphic violence, she imbues it with what she calls “feminist care taking action,” superimposing footage of herself dressed in crumpled crimson cloth, crawling all over the screen while rubbing and waving a protective hand over the baby snakes. She also filmed crabs mating on a beach, a voyeuristic incursion that spurred pangs of guilt when she invaded the site of the lovemaking.

In the video “Reptile Anxiety,” Gearhart’s empathy for a mother alligator flows into a kind of hallucination. As she coddles the creature, she tries to visualize the reptilian brain. The result is an animated collage of waterfalls, sex toys, flowers, fire, meat and dogs with frisbees. Each of the videos grapples with the problem of fully connecting to someone else’s experience, in this case through cinema—a redress of the violence woven throughout Herzog’s own cinematic efforts.

Untangling these questions about struggle and survival, intimacy and understanding, the show leaves the viewer with more uneasiness than answers and the sense that beauty still exists in a survival-of-the fittest society, where predators might take away meals from the elderly. It suggests the futility of yearning for bucolic times that have never been and makes a powerful case for the return of affection.

Each Eats Its Own is on view through April 1st at SOIL.