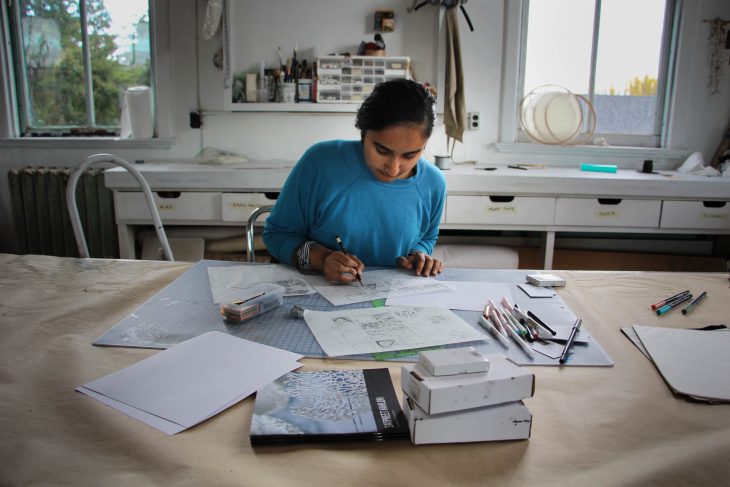 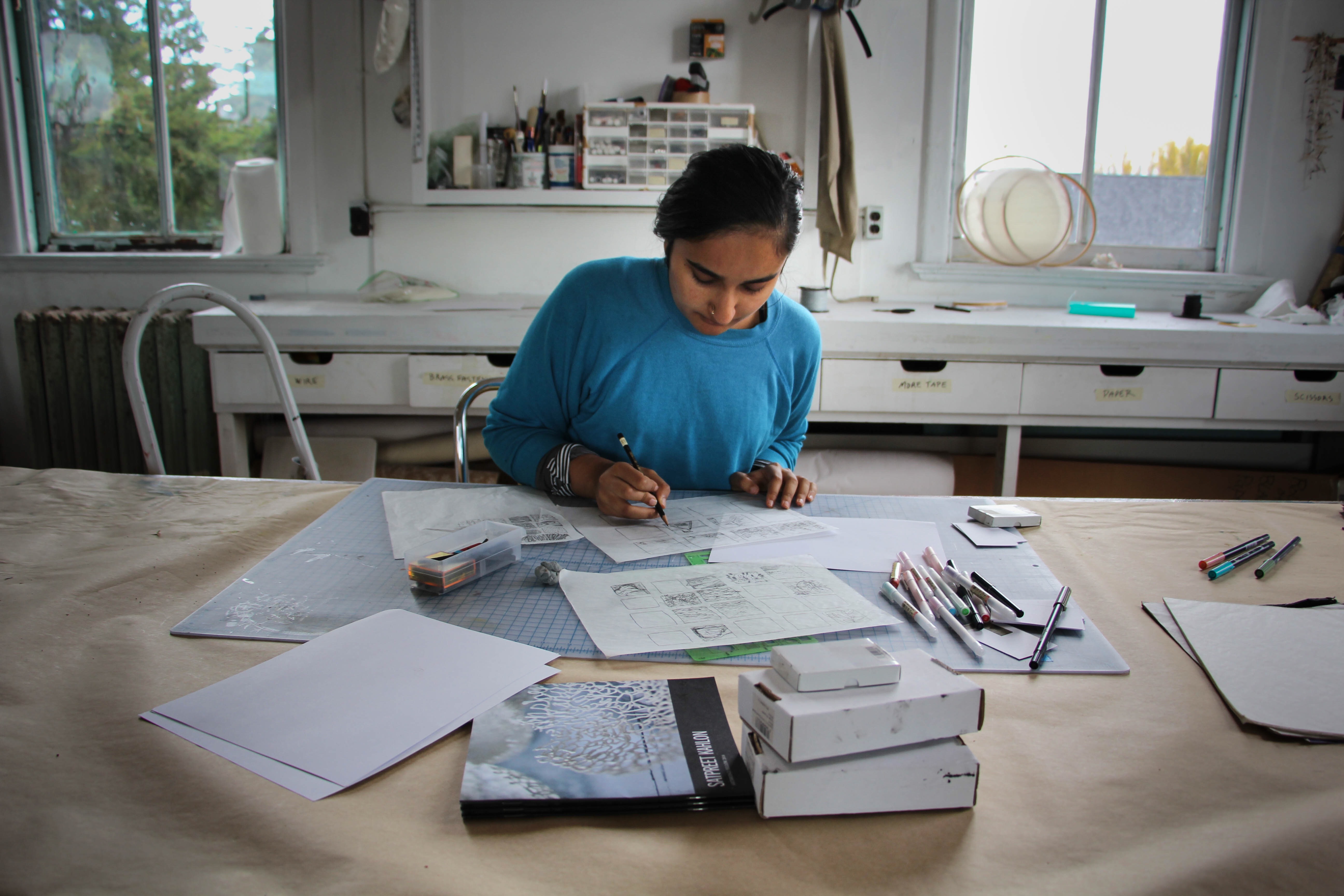 Grey spring light engulfs a white sheet of paper pinned to a wall. It looks like the sun has shot through and delicately cut flakes from it. In fact, the design in the paper has been carefully and painstakingly burned by hand by Satpreet Kahlon. She’s worked out of this new apartment and studio space for a short time, but Kahlon’s spaces are not always physical. One such incorporeal realm is the online gallery called Deep Space, which Kahlon founded this year. It a place—a conceptual haven—for artists to experiment.

“These are places where American and Indian culture intersect and [where] industry and domestic craft meet,” she says when we rendezvous at her apartment to talk. She calls these places “self-created systems of survival” which she cultivates to cope with the trauma of living as a first-generation immigrant and woman of color in the US.

“It’s about figuring out the space that I live in, and that other marginalized communities live in,” says Kahlon, who was born in India and raised in Chicago and Michigan. “A space that’s separate from the space that my parents live in, or for second-generation immigrants—and very different from the space that white people live in. The thing is, how do you craft such poetic places that have traditionally been neglected? Where someone can thrive and survive? What does survival look like in those spaces? And when we look deeper, what does it feel like?” 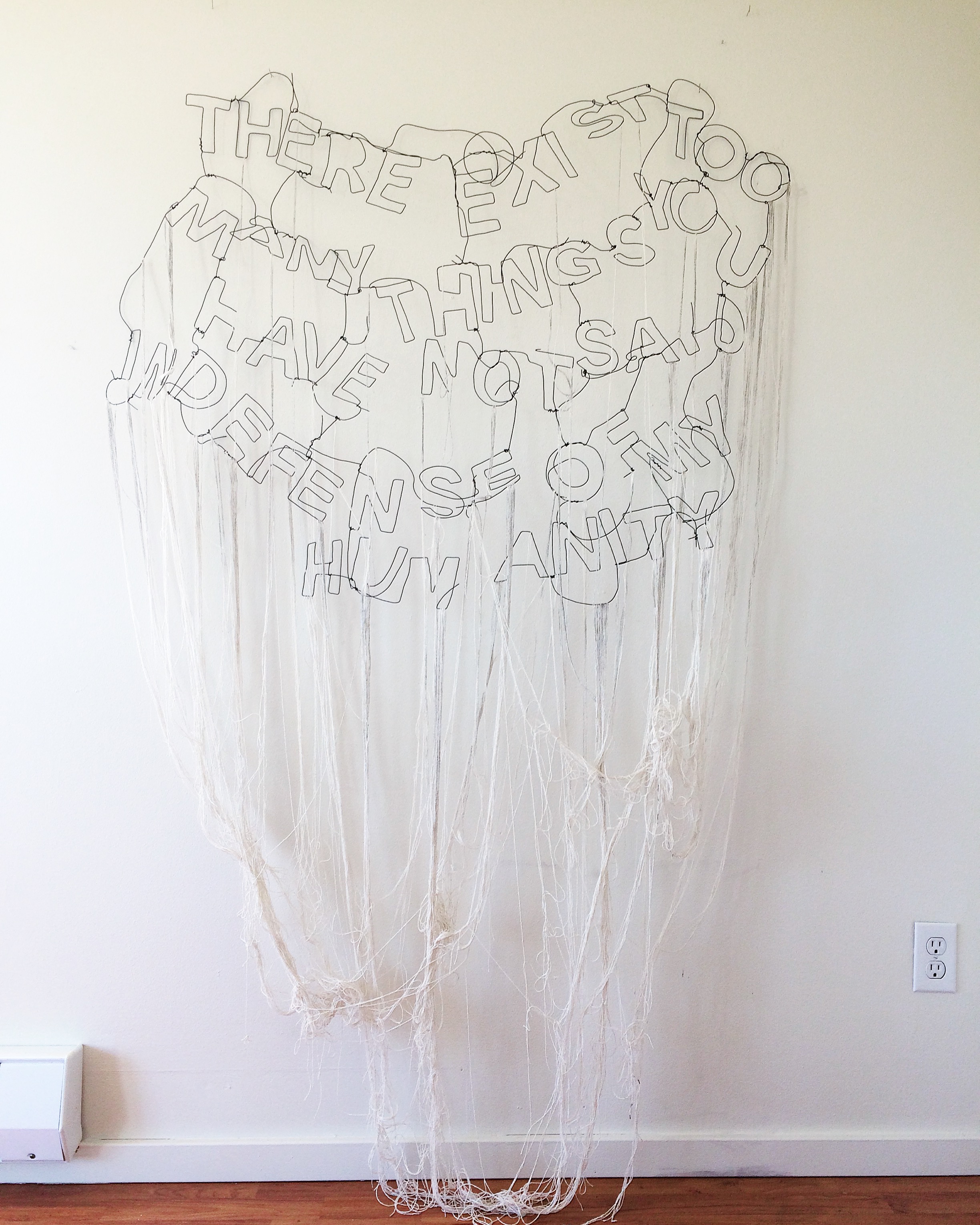 Her work subtly poses these questions. Using paper, twigs, yarn, cloth, porcelain, plaster and silk chiffon, Kahlon combines traditional fiber techniques with natural and industrial materials, threading in themes of sexual violence and racism. The conjoining of hard and soft materials chips away at preconceptions about beauty and and power. Taking long walks through the city, she collects industrial trash to incorporate into her work. Reworking those materials, she layers histories.

It’s hard to believe such a cultivated body of work only materialized in full a little over a year ago. After earning degrees in art and art education at Michigan State University in 2011, Kahlon found herself searching for community before she could create. She looked to India, North Carolina, Santa Barbara and finally Seattle. In 2015, after living in the city for a year, she had her first solo show at the Ethnic Heritage Arts Gallery in Seattle, where she displayed bright, brittle-looking sculptures that reckoned with survival and sexual violence as a person of color. The reception was favorable, the exhibit pivotal. In 2016, she quit her day job to work on art full-time and mounted additional solo shows at the Alice, Method and Twilight galleries. In 2016, her work was included in several group exhibitions and she was invited to serve as one of the curators at the Alice. This fall, she’s leaving to pursue an MFA at Rhode Island School for Design. As talked in her studio, she struggled to process all that’s happened in the past few years.

How did you decide to take the plunge to be a full-time artist?
I was really scared. Coming from an immigrant working-class family, I didn’t and don’t have financial support to intern at a gallery or make art and see what happens. I was raised to be really careful. Always being on survival mode has worked for me, but it has also made me overly conscious when it came to taking risks on my work. I worked full-time jobs that I hated because I was so scared to be financially vulnerable. And then I realized that if I didn’t believe in myself, no one else would. So I slowly went to part-time at my job, spending more and more time building a portfolio, and was eventually able to quit entirely. 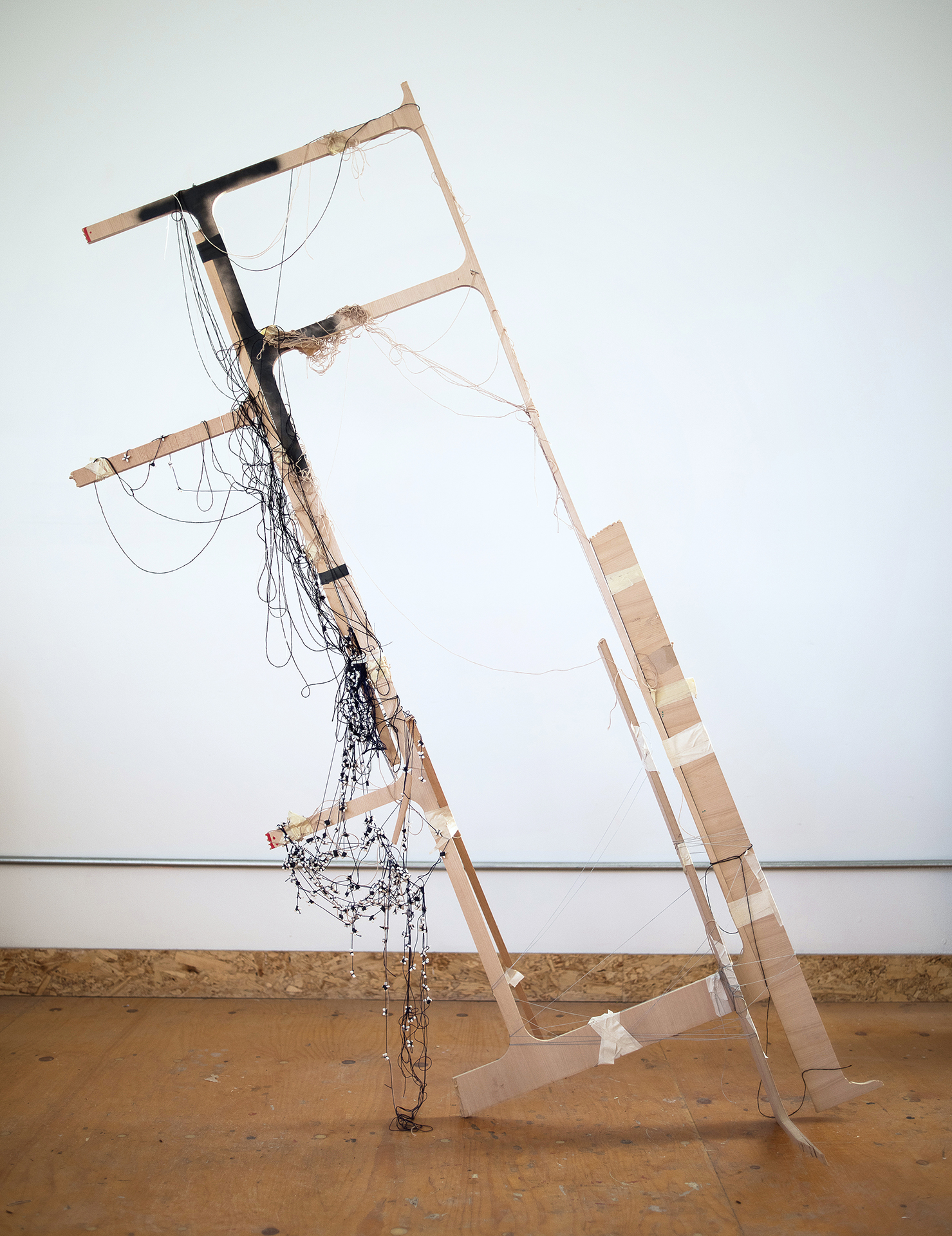 A lot has changed for you, including access to more physical space to work in. Do you think your work will change too?
Not really, because I don’t have much storage space here either. Usually, I destroy my work when I can’t store it. I prefer this over the slow deterioration of the works, which is a little heartbreaking. Often, I’ll use the remnants of old pieces to create new works, which is why my work is about accumulation, too.

Is this also why you work with trash?
In college, I was working 30 hours a week to pay rent. I didn’t have money to pay for art supplies, so I shoplifted and went through the trash a lot. I still do the latter. So while it’s born mostly born out of necessity, collecting trash is now part of my process. Even today, when I buy an expensive material, I’m so connected to the monetary value of it that it’s impossible for me to work on. With trash it’s fairly simple. Either I make something great out of it or I put it back where I found it. There’s no way for me to make it lower in value than it was.

The trash you collect is mostly industrial, often grid-like, like grills or rasters. Why is that?
Because those are the kind of masculine forms I’m attracted to and yet want to subvert. In contemporary art, raw industrial materials are totally cool to use, but it’s reflective of the white male patriarchy. When I weave around it, add fiber to it or make it into something different, I’m twisting that language. I make it gentle and poetic in this soft, feminine way, so that it’s undeniably made by a woman or femme. How does that change the value or perception of the work? It’s not a cheap trick though: The work needs to be so undeniably good and beautiful that a white man who hates identity politics still wants to hang it on the wall of his loft (laughs).

Why is undeniable beauty so important?
It’s about proving my worth. It doesn’t even have to be beautiful. I put so much time into the work that no matter if you like it or not, you can’t deny the amount of labor, the time or the skill. Yet I ask myself: Why I am I making beautiful, perfect objects if that’s not a reflection of my experience at all? Recently, I started threading together broken pieces of wood I found in the trash, repairing them. I wonder if it’s possible to make unbroken work in a broken system. And what happens if I make things that are broken, that aren’t beautiful? Those are uncomfortable questions for me, but I hope I’m asking them with my work.

You’re also a curator. How do you define your approach?
It’s about advocating for artists, first and foremost. You can tell the difference between a curator who puts their own ego in the work and others that are there to help the artists. The curator’s point of view is of course always going to be a part of it, but how do you minimize that? I’ve been critical of other curators for not being equitable and supportive of marginalized communities in Seattle. Now I need to make sure that I prioritize all of those ideals in my curation. And I know it’s not easy, and I’ll mess up eventually. I don’t think it’s necessarily about being perfect, but being open to criticism, being transparent, and learning from your mistakes.

Could you talk about your curatorial debut at the Alice?
From which we rise is a collection of 15 pieces made by 15 different artists from seven families, exploring the legacy of fiber, matriarchal tradition and craft. It’s all femmes, mostly of color, although I didn’t write about that in the exhibition statement. I want the equity to be embedded. When it’s a show with only white men, they don’t talk about that either, they just choose artists they like. Well, that’s what I did. The point is the work is fucking amazing. 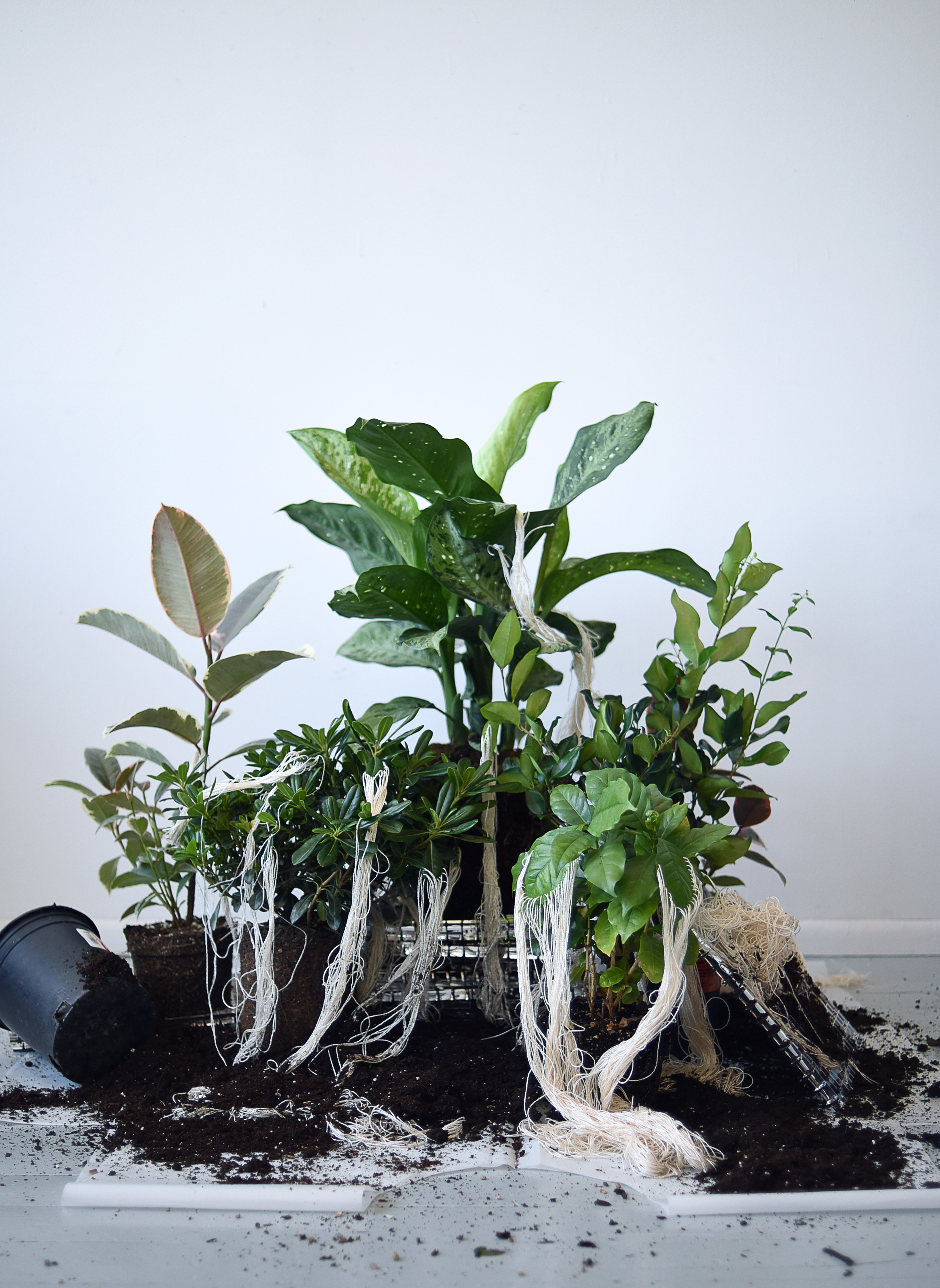 Why did you want to do a show on craft?
I often think about the meaning of fiber or domestic craft and contemporary art in my work. Where does that distinction come from? Often, it’s an extension of Eurocentric and colonialist thinking. I asked all the artists to pick an artwork made by a matriarch in their family and then respond to that piece. My mom, Kulwinder Kahlon, is in the show. She responds to a work that my grandmother, Manjit Kaur, made. It’s about making them feel valued as artists. If a white man can make a fiber work for the first time and sell it for $50,000 why can’t my grandma’s quilts sell for the same amount? Why can’t we make them feel like their work, love and labor is valued and revered too?

Why did you start your online gallery Deep Space?
I wanted to devote a space to artists who maybe don’t have the time, means or physical capacity to make a super-ambitious physical exhibition. I like the idea that there’s no physical object. I’m so tired of lazy contemporary work that markets itself as conceptual, but really is about the object and not an idea. When there’s no object to lean on, do your ideas stand for themselves? 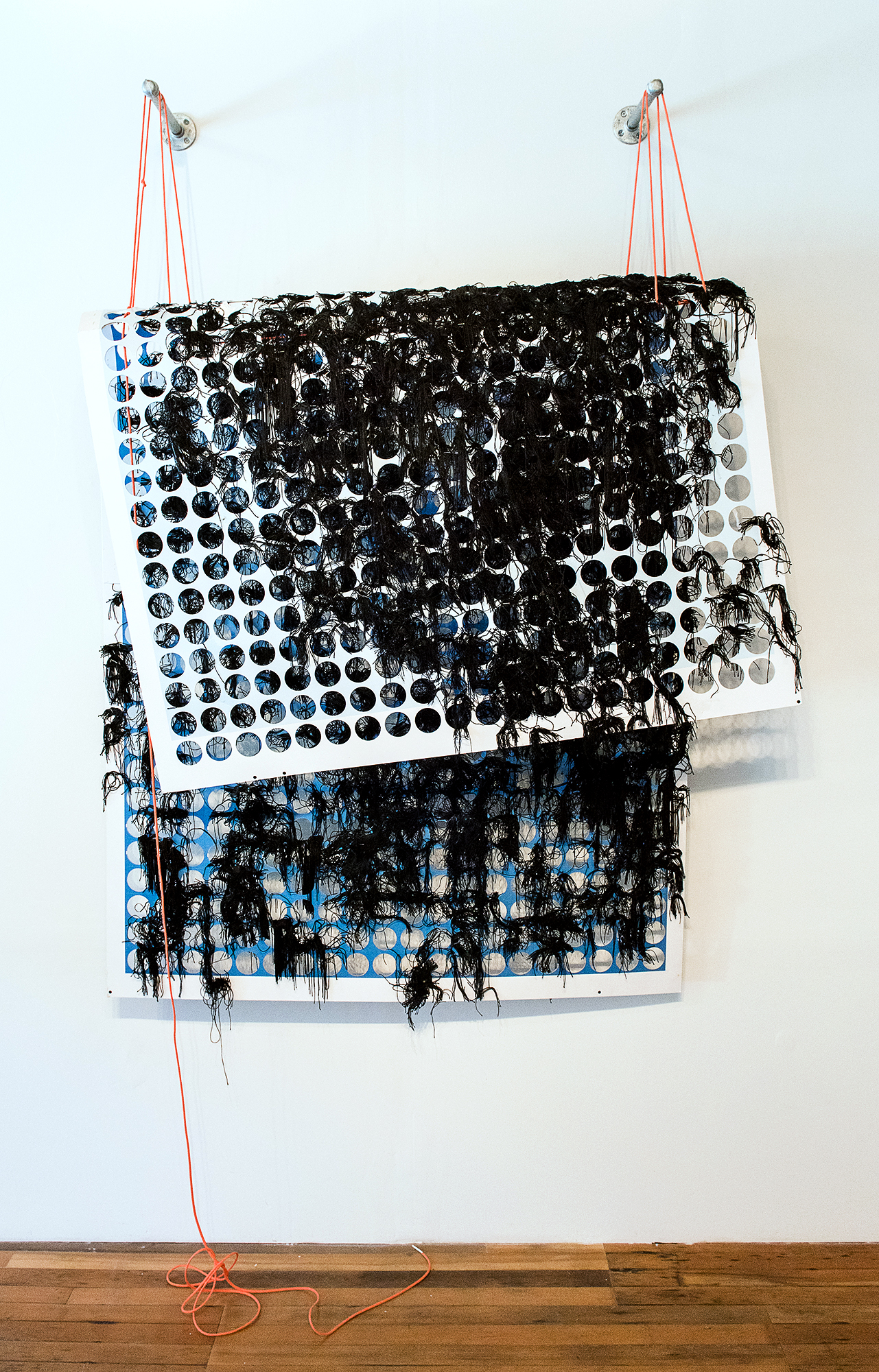 What are some other things you’d like to do?
I’d like to continue to curate within the community of curators that I’ve found in Seattle, specifically at the Alice. For myself, work less outside of my studio and work on larger solo shows where I get funding to make my work and also to bring other people on board. I’d also love to create a shared studio space for PoC artists. That would be fucking amazing.

How do you feel about leaving Seattle for grad school?
I have a lot of mixed emotions. On one hand, I am leaving my community, buying into an institution that thrives on exclusion and uprooting my practice at a time when I just began to feel settled. On the other hand, because of the full fellowship that RISD offered, I will not have to work outside of the studio to support my practice for the first time. This is a privilege that I have a hard time even imagining, and I’m very excited to see how it transforms my practice. Overall, I’m heartbroken to leave my friends and chosen art family in Seattle, but I’m looking forward to being pushed, growing my practice and gaining more skills so that I can be a better and smarter advocate for my community.

From which we rise is on view until June 19 at the Alice. Visit Jessica Hoffman’s exhibition on ‘Deep Space’ at www.deepspace.place. Photos courtesy of the artist.