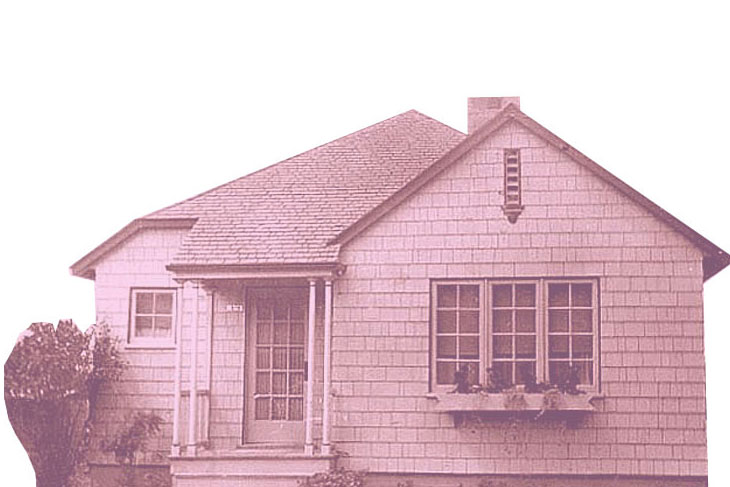 “I’ve seen orcas. Twice!” Joey Veltkamp enthuses about the ferry ride between Bremerton and Seattle. As he talks, his arm nearly brushes a large pink quilt that reads “WE’RE ALL GONNA DIE”—the centerpiece of his solo show, Blue Skies Forever, opening tonight here in Seattle at Greg Kucera Gallery. After the evening’s lively opening reception, Veltkamp and his husband, artist Ben Gannon, will take the ferry back to Bremerton, where they moved last August.

A growing group of Seattle artists is moving across the Sound to the blue-collar navy town of a little over 40,000 people, lured by lower home prices, ample studio space and idyllic ferry rides. A fast ferry has accelerated both the trend and the trip from Seattle.

On a sunny Saturday, visitors are trickling into their pastel pink-curtained front room and gathering around a sumptuous series of videos and paper works by Seattle artist Erin Frost. Among them are illustrator Isvald Klingels and graphic designer Christian Petersen, stopping by on a short intermission from moving boxes into their own Bremerton house.

“We were Seattle renters for eight years,” Klingels says. “Our landlord selling the house was a wake-up call. Buying a house was only possible for us in Tacoma or Bremerton.”

“Considering the commute, a beautiful ferry ride, the decision was kind of a no-brainer,” adds Petersen, who lived in Bremerton for three years as a kid. “It was very different back then. There was a proper town center. Hopefully there can be one again someday.”

Although there are bars, coffee shops and restaurants, the city’s downtown core can exude a desolation unique to port towns. Some shop windows are filled with art installations, but many offer only “For Sale” and “For Rent” signs.

But there is space. Finding a historic 2,700-square foot workshop in downtown Seattle in 2018 sounds absurd. In Bremerton, one sat empty until metal artist Matt Tilton took it over last year. He’s adding a storefront gallery to his studio this month and is also transforming a derelict chop shop on the same block into a studio space for four other artists, who plan to open a second storefront gallery.

“Bremerton feels like the right place to be,” says one of the future tenants, glass artist Armelle Bouchet O’Neill. Hers is a familiar story. To afford living in Ballard with her husband and daughter, they took in a roommate. Rent went up. Things got tight in different ways. They looked elsewhere.

Low-income communities are no strangers to this scenario either. They are frequently pushed out by gentrification in which artists often play a role. Most artists express some hesitation on this front. “It’s growing fast, and that’s hurting the local community to a certain degree,” adds Tilton.

Along with Seattle people, Seattle money is streaming into Bremerton as well, forcing locals to joust for the affordable properties that remain. This boom represents another upswing for a town that has always ebbed and flowed with the forces of war, thanks to its Naval shipyard.

Now Bremerton is ready for another renaissance. “We’re on the cusp of something new,” says Olympic College art professor Marie Weichman while she darts through the college’s brand-new art space, where its second show, Strength, Struggle and Survival, opens April 13. “Bremerton has always had a cultural value and core. We had seven theaters during WWII.”

“The people moving here feel like they stumbled on a secret,” says Marit Bockelie, who runs letterpress shop Bremerton Letterpress Co. and is spearheading Wayzgoose Kitsap, a new Bremerton arts and printing press street festival on Labor Day. “I love that, but people have been living here and making art for a long time. They were working in their basements or garages and just needed a place to connect. Now we finally have places for it all to galvanize.”