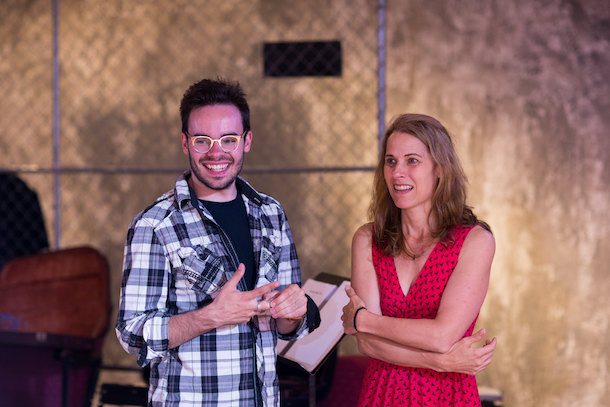 “It’s about to get really loud in here,” says director Logan Ellis, as the warm whomps of an electric guitar tuning up fill the Kent mall storefront where his company, Theatre Battery, is at work on its newest production. Barbara Hammond’s We Are Pussy Riot or Everything is P.R. is a music-filled docu-collage of a play, a poetic and sliced-up chronicle of the self-styled “most famous performance art piece in history” and the politics and personas that swirl around it. It is also, as the cast gathers around a keyboard, very loud.

To be fair, it’s been loud for a while. Ellis, Hammond and I are talking in some of the squishy mismatched seats of the enticingly ad hoc theatre space, and the cast has been running through vocal work: thick, classical choral harmonies, patriotic folk songs, the enveloping chords that open Madonna’s “Like a Prayer.” Madonna appears in the play. So does Vladimir Putin.

“As I met Russians and as I read about Putin and the post-Soviet era in Russia, I realized that Pussy Riot was really the result of all of Russian history,” Hammond says.

Like so much of America, Hammond began following the story art collective Pussy Riot after their it slammed onto our social media feeds in February of 2012. That month, five young women entered Moscow’s Church of Christ the Savior, covered their faces in bright balaclavas, and yarled a punk prayer—“Virgin Mary, put Putin away!” The action was short—guards dragged them out after less than one minute—but the resulting media firestorm was long. After Pussy Riot uploaded a video of the event to YouTube the girls were charged with “inciting religious hatred,” tried and sent to labor camps for two years.

To tell their story, Hammond flooded herself with research material—she read exhaustively, attended protests at the Russian Embassy in New York, traveled to Moscow. The resulting piece, woven from real text and rich with music and audience participation (though not of an arbitrary, invasive variety), views the Pussy Riot story from many angles: the women themselves, the Western media that fixated on them, an orthodox Church employee, a Russian political prisoner without the advantage of Western media attention.

The play premiered at the Contemporary American Theater Festival at Shepard University in 2015, where it was a commissioned work. Hammond and Ellis met the following year at San Francisco’s Magic Theatre, and she mentioned she’d written a sort-of-musical about Pussy Riot. “When [Theatre Battery] read the play all together, what stood out was how it’s reaching out about international, socio-political events that might feel alien to our audience, but that because of current events in our country are going to feel extremely prescient.”

Radical Hospitality, a concept pioneered by Mixed Blood Theatre in Minneapolis, is about eliminating barriers to entry. “Nobody who is not a traditional theatergoer has any reason to believe that 25 dollars or even 10 dollars is a good deal on a play,” Ellis says. “When you have no context, stepping into a storefront theatre with a play that you’ve never heard of is actually a big risk for people and a good reason to not want to do it.” And so, Theatre Battery tickets are free.

“It allows people to get away from the expectation that you’re purchasing a piece of entertainment, and more into the idea that you’re tapping into a community resource,” he says. “Just like a library or a church, everyone is welcome to this, and walking in isn’t going to cost you anything.”

Empowering its audience members has been a growing piece of Theatre Battery’s mission. The company, founded in 2011, produces one show a year in a Kent space. As the only theatre company in the city (outside of a school), Ellis feels a responsibility to bring in new work and big, relevant stories. But more than that, Theatre Battery wants its audience members, many of whom haven’t had much exposure to theatre, to feel empowered as cultural participants.

Ellis, who grew up in Kent, remembers well the feeling of being from somewhere with no identity. “It’s easy to be sent a message, by that suburban peanut butter spread across the nation, that you are only worth as much as how many chain stores you have available,” he says. “We’re trying to invite people to think for themselves and value their own perspectives.”

For her part, Hammond wants to challenge people to think about issues of church and state, of media as marketing tool, of how—or if—we can live together with people who have a fundamentally different view of the world than our own. She does so by laying out the real words and situations that emerged from a country not-all-that-far-removed from our own, and by giving voice to some characters and ideas that don’t often find much empathy in the Western cultural milieu.

“Even Putin, I write about how when he was born his grandmother had him secretly baptized,” she says. “I think it’s dangerous to think of people as not human. He’s not a monster, he’s a human being who behaves like a monster. Whatever the content, theatre brings us closer in a time when we’re dangerously far apart.”