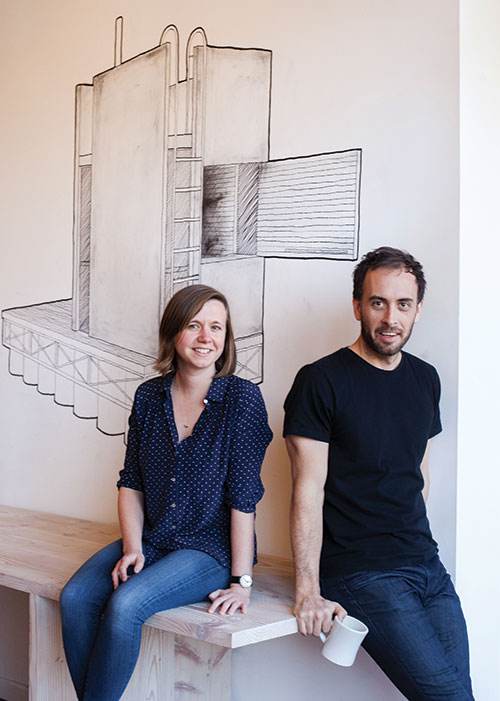 A year ago, architects Aimée O’Carroll and Jon Gentry launched goCstudio with a project of their own with no clients: a floating sauna. People loved the idea so much that by October O’Carroll and Gentry had raised $44,000 via Kickstarter to build a prototype.

Once built, the six-person vessel—which goes by the name wa_sauna—will be amphibious and itinerant. “We can hook it up like a trailer and back it in at different places,” says Gentry, who saunas everyday.

O’Carroll and Gentry, who met while working at Olson Kundig Architects, bridge the art and architecture worlds. Their luminous Pioneer Square office hosts art shows and shares space with graphic designers. All of their projects highlight their independent creative approach.

Right now, goCstudio is working on a couple of residential projects, designing a yoga studio on Capitol Hill in the space recently vacated by Washington Ensemble Theatre and talking with artist trio SuttonBeresCuller about designing SBC’s Mini Mart City Park in Georgetown. After a lengthy review process, they’re also preparing to move forward with a winery on the Columbia River.

“It’s this rolling, velvety landscape,” Gentry says. “The site has a barn that’s probably late 1800s and its roof echoes Mt. Hood, which looms there. Our design berms into the hillside to create a protected zone from the winds.”

O’Carroll and Gentry don’t have an overarching aesthetic; instead they’re focused on the unique attributes of each project. “We’re always up for a challenge,” O’Carroll says, “whether that’s an unusual site or a low-budget project or constraints that push us to come up with more creative designs.”

Aimee O’Carroll
Age 29
Hometown London, England
Current Obsession Walking to work every day (but not back)
Most Spectacular Failure Breaking the same bone in 2003, ’11 and ’14
Skill You Wish You Had Beautiful handwriting