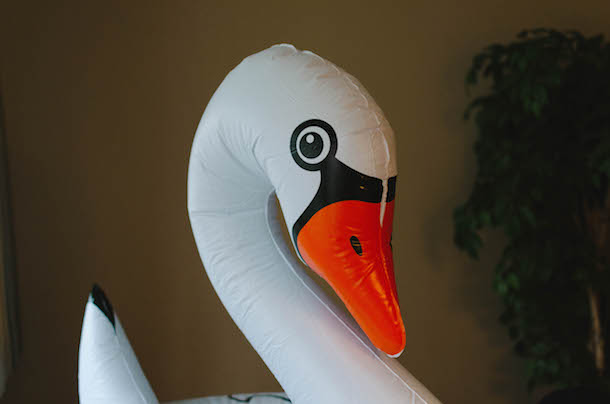 It may have been that my exploration of the city and its art had just begun, but I remember a time when I drifted between readings by authors so established and/or academic they seemed mythological, and open mics composed of three unpublished sci-fi manuscripts and a man shrieking about pussy and strawberry jam into a string-less guitar. Something seemed missing from my life as a writer, and I didn’t know what it was or how to find it. On a trip to New York when I was 18, I explored the East Village meticulously, looking for the world of Eileen Myles and Klaus Nomi and finding only horribly overpriced pizza.

A couple of years later, the painter and performance artist Jamey Braden introduced me to a group of young writers who hosted a weekly workshop called “Tweeningfulcore” in the house where most of them lived. This was where I met Summer Robbins (who had just opened Pilot Books, where I had my very first reading), Willie Fitzgerald, Frances Chiem and Tara Atkinson. I loved and related to their writing, and I experienced comradery, collective support of creative aspirations and a new, tremendous sense of possibility. It’s wonderful that technology allows a person to contact a writer on the other side of the world instantly at any time, but there’s nothing like the emotional and creative sustenance of exchanging jokes on a ratty couch with a few people whose writing you really love. Writers and artists need each other’s physical company.

This group of people, who went on to found the APRIL festival, remain my dear friends, and watching them foster a sense of community in the city at large has been magical. The good APRIL has done for the Seattle literary community over its seven-year existence is immeasurable.

Part of me hoped that the finale of the “final” APRIL festival—on April 1—would be Fitzgerald yelling “APRIL FOOLS! The festival’s not ending and we’re starting a writing center!” Sadly, the mylar balloons behind the stage that had spelled “APRIL” in previous years said “NO JOKE.”

The normally week-long marathon of events was condensed into one day this year, held entirely at the Hugo House’s temporary location, a former seminary. The day began at noon with APRIL’S impeccably curated small press expo, which included Wave Books, Black Ocean, Cold Cube Press, Gramma Poetry, Hobart, Octopus, Wave Books, Seattle Review of Books and Poetry Northwest, among many others. Colleen Louise Barry’s Mount Analog, among the most innovative presses in operation (or perhaps anywhere ever) featured broadsides of poems from Ted Powers’s excellent new book, Manners, printed on vintage leather gloves, and also a pair of rubber “reading gloves” bedazzled with jewels, fur, fake flowers made to be worn while reading Jenni B. Baker’s book of erasures, GRIM TALES. New-ish poetry record company Fonograf Editions set up a booth where expo-goers could listen to original work by Eileen Myles and Rae Armantrout on vinyl.

Every hour a pair of readers took the stage: Matthew Simmons and Chelsea Werner-Jatzke, Jane Wong and Quenton Baker, Jessica Mooney and Anca Szilagyi, and Elissa Washuta and Naa Akua. Between this parade of talent, the press expo, giant foam fingers bearing the words “read small press” and a river of bourbon, it was impossible to be too sad it was the last APRIL. Naa Akua stepped off the stage and abandoned the microphone during a powerful reading that closed out the daytime portion of the festival. 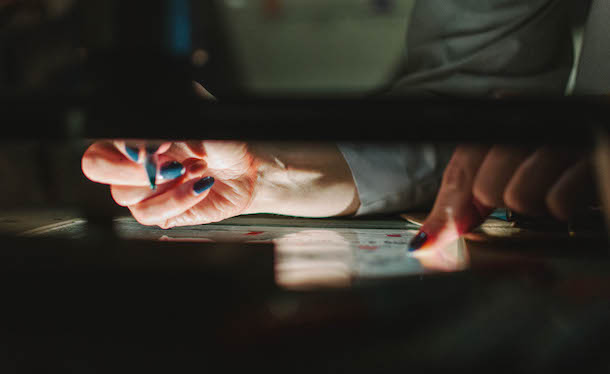 At APRIL happy hour, poetry scientists Dr. Ink (Sierra Nelson) and Dr. Owning (Rachel Kessler) of the Vis-à-Vis society revisited their “ongoing goodbye research,” a performance/experiment they designed for the last hurrah of the old Hugo House. The two distributed surveys with the following prompts:

How do you prefer to say goodbye?
What is the best way to end?
Nostalgia is:
Write something you are saying or want to say GOODBYE to here:

The doctors graphed the responses on a projector, then used the answers to the second question to design a special dance, which APRIL-goers did with them enthusiastically. The answers to the final question were compiled into a collective poem that they read as the performance’s finale.

A waffle-on-a-stick truck, My Sweet Lil’ Cakes, provided free dinner during the 6 p.m. reading, proving both that everything is better on a stick and that if you’re ever at a loss for what to name your business you should pick a name that subtly references butts.

Normally when the first adjective applied to a poet is “lyrical” I fear I’m about to hear pointless descriptions of birds by someone straining to sound like they died 200 years ago, but if anything Jayinee Basu is here to bring us the lyricism of the future, comparing a lizard’s skin to “shifting light in a trash can.” Anastacia Renee Tolbert read several poems I’d never heard, a treat we can all look forward to this summer when she has three books coming out. Tommy Pico read from his book-length poem Nature Poem, whose speaker, as a young, queer, city-dwelling Native American poet, disdains the idea of writing a nature poem, of being equated with a fucked-up American concept of nature reeking of colonialism. His scathing wit and lines like “I shoot through your stupid sky like a stupid sky” puncture that concept so hard you can practically hear the air rushing out. 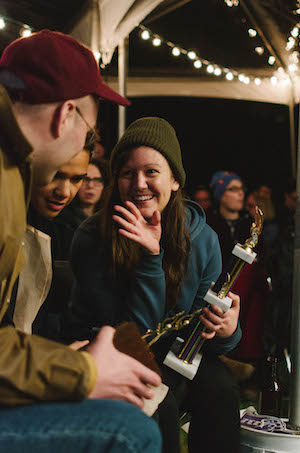 The final event of the evening was APRIL’S ever-popular multi-genre storytelling competition, “A Poet, a Playwright, a Novelist and a Drag Queen,” whose theme this year was “Swan Song.” Inflatable swans littered the grass, and I thought, “How lucky am I to know the kind of freaks who would own swan blow-up dolls,” before realizing they were pool toys.

Novelist Peter Mountford read the first story he ever published, about a man living in Ecuador whose girlfriend cheats on him with Russel Crowe’s driver. Playwright Samie Spring Detzer read about the weeks preceding her dad’s death, and the absurdity of life that persists even in the last moments of it. Her dad’s nurse’s name was God (really) and at one point he was visited by a phantom bird, but when asked what kind, he just said, “Generic bird.” RainBowGoreCake, Seattle’s youngest drag superstar, who is 14 and has been doing drag since the age of 8 (!!!), performed a Trump-smashing rendition of “Season of the Witch.” I read a poem called “My Internet Dating Profile.” All the performers got trophies—mine said “Burgermaster Manager’s Choice.”

Everyone left the garden where the readings were held and went inside for the craziest karaoke party I have ever seen. I wondered if it was the first time a fog machine had been in that building, and if so, how this terrible oversight had occurred. Rich Smith sang Matchbox 20, Mary Anne Carter sang “Earl Had to Die” by the Dixie Chicks. Jamey Braden, who had years ago introduced me to all these miscreants, rolled among the folding chairs and over Naa and Anastacia’s feet like a bowling ball, everybody cracking up.

It was wonderful to see these writers celebrating the conclusion of a project that brought happiness and community to so many people, that proved literature is alive. I remember thinking when I met them that they knew some kind of truth, some kind of thing I hunted for, and feeling maddened by my inability to say what it was. I guess that’s the thing about writing—that magic truth is real, but it’s not something that can be said succinctly. It’s so huge it can’t even be said by one person in one lifetime. You can see it when you’re reading alone and it floods your whole life, and in a room full of other people who are flooded, you know for sure that it’s real.