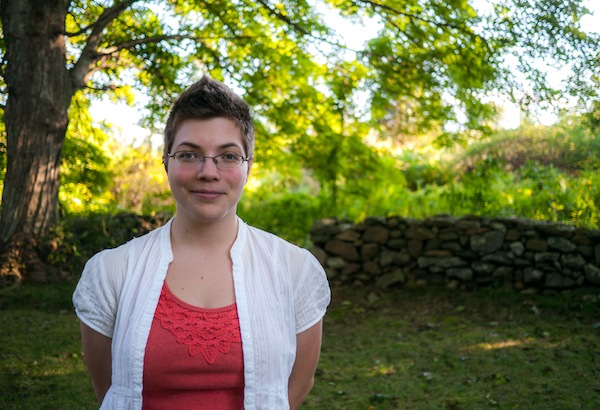 The Seattle-based animator is awhirl with conversation from the instant she sits down for drinks and a chat at Capitol Hill watering hole Grim’s. She speaks in upbeat cadences, with so much enthusiasm and full-steam-ahead momentum that our hour-long interview passes in the blink of an eye. “You’re gonna have a hard time narrowing this down,” she notes with a self-aware chuckle about 40 minutes in.

Her high energy is certainly in keeping with traditional perceptions of her chosen art form. But Martin’s animation style—characterized by thoughtful, organic beauty and a usage of everything from paper cutouts to marker sketches on glass to fine lines of sand—owes more to the adventuresome spirit of conceptual art than the massive assembly lines of Pixar and Disney.

Martin garnered local attention when a grant from Sound Transit enabled her to create an animated short, The Whale Story, in nearly life-sized dimensions on a wall in Cal Anderson Park near the park’s cone fountain. More recently, three examples of her handiwork screened at the 2013 Seattle International Film Festival: a striking sequence (animated with sand) in the documentary feature Barzan, the minute-long A Walk in the Woods, and They Look Right Through You, a profoundly moving short on human/animal connection that preceded screenings of the popular documentary Furever.

The Whale Story and They Look Right Through You will resurface at Northwest Film Forum on August 3, as part of Strange Creatures, a terrific selection of all-local animated shorts curated by Martin. And as she readily points out, her pieces represent just a small portion of the works on display.

This is the second time you’ve put together a compilation of animated shorts by you and your fellow members of the Seattle Experimental Animation Team, isn’t it?

Yeah. The first one was called Inter-Action, and I curated it in 2011. It basically came about because I spent two-and-a-half years making a ten-minute animated short [laughs]. I suspected it wouldn’t get into a ton of festivals, because it was kind of long for a short. But I knew I wanted people to see it, even though it had issues that I was aware of. So I thought, I’m gonna curate a program that includes this film, along with all these other amazing films that my friends in SEAT are making here in the city. I screened it at the Northwest Film Forum, in Portland, in New York, and then around Europe. I think the final tally was 14 screenings in nine different countries, including Canada. The most recent one was actually in Montreal in February.

I plan to go back [to Europe] with this one, because this program is better in a lot of ways. Not that the films in Inter-Action weren’t great, but the new ones are uniformly more solid.

One of the things that’s really impressive about Strange Creatures is how quintessentially Northwest it is.

I know! Clyde Peterson’s music video is a perfect example. He has this scene of a car going through Seattle, with the Kingdome blowing up and Bigfoot appearing at the end. Bruce Bickford name-checks Cafe Racer in his piece. Britta [Johnson]’s film was shot and animated in Port Townsend. Susie Tennant is such a Seattle mainstay, so I was thrilled when she wanted to help me by telling her story for They Look Right Through You.

All of the shorts are really strong, but Bickford’s contribution to the screening is pretty amazing.

It’s very Bruce—very quirky, very dark. It’s all blood and gore and destruction, but in this very dainty, detailed line pencil work. I’ve never met anyone who can animate like him.  He’s got all these things going on at once, and he’s balancing them like a circus guy with dinner plates on sticks.

What about your animation style? It’s informed by fine art more than assembly-line cartoon animation.

Yeah. I’d say that about all of the filmmakers‘ work.

Even beyond your creative choices of media, though, your work doesn’t feel like conventional animation. What determines the type of media you use for own pieces?

There are some animators who really stick to one medium for their whole careers. They just do drawing, or they do clay, and that’s it. I just really love experimenting, and I’m a very technique-driven filmmaker. That’s really the fun part-trying to figure out what medium to do it in. The great thing about animation is that you can do anything.

I also wanted to ask you about the Strange Creatures program. Where did you get the inspiration to basically put together a ‘zine instead of the usual text-and-photo type program?

I thought, instead of having just a regular old Word document to copy and hand out at the door, wouldn’t it be cool to have a miniature comic book made by Seattle comics artists? Mark Palm did this great cover for it, and Kelly Froh did portraits of all the animators. It’s this great little object, but most importantly, it’s also something that I don’t have to carry in my suitcase [laughs]! I can just have the venue print them out for screenings.

What are your long-range plans?

I’m doing a Master’s Program in the Netherlands soon, so I’ll be able to take [Strange Creatures] around Europe—the travel will be a lot cheaper. But one of the things I realized when I started seriously planning this Masters’ Program is that I really like it here. I’m only going to be gone 15 months, and I want to come back, but leaving even for that long is gonna be bittersweet.