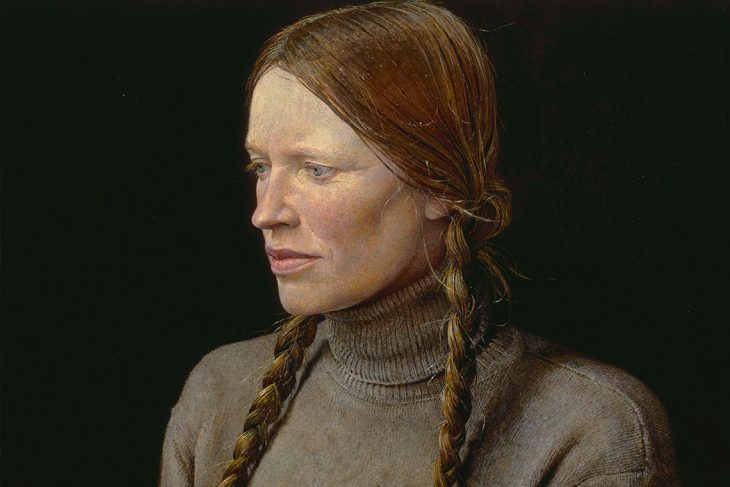 A breeze blows thin curtains over the threshold of a wooden window sill. The room is shady, the air outside bright and overexposed. The simple scene is washed in muted colors: ochre, brown, gray. Lonely tire tracks lead to the sea.

There’s no living soul in sight and yet this painting, “Wind from the Sea,” is one of the most moving portraits in Andrew Wyeth: In Retrospect. The sweeping yet intimate retrospective of the popular American painter (1917–2009) at the Seattle Art Museum occasions his 100th birthday.

“[‘Wind from the Sea’] is a meditation on life and death,” says Patricia Junker, who co-curated the exhibition with Audrey Lewis of the Brandywine River Museum of Art. Junker describes it as it “a symbolic portrait” of Christina Olson who Wyeth befriended during his summers spent in Maine. He painted the scene from the attic of her house. Olson is absent, but she breathes through the painting like wind through the embroidered curtains.

By recasting Wyeth’s images in symbolical light, the Seattle Art Museum challenges the painter’s reputation as a reactionary realist or an anachronistic revivalist of sappy rural vignettes. More than 100 paintings and drawings, including rarely seen loans, suggest an artist anchored in his terroir, a barren pastoral populated with misfits, among whom Wyeth counted himself.

Wyeth counted Christina Olson, physically disabled by polio, among the misfits, too. Perhaps this explains the national infatuation with the mysterious woman in the 1948 painting, “Christina’s World,” acquired by the Museum of Modern Art in 1949. Soon after, more radical techniques by more radical artists took the art world by storm, and Wyeth’s immense popularity with the general public proved inversely proportional to the disdain of critics, who suddenly considered him old-fashioned.

In truth, Wyeth was deeply ensconced in his immediate surroundings. He never ventured far from his rural comfort zone of Chadds Ford, Pa., and the towns of mid-coastal Maine where he summered.

The world kept turning around him. In 1971, the same year he captured his neighbors Karl and Anna Kuerner in a sparse depiction of a tense marriage on a farm, performance artist Chris Burden asked a friend to shoot him with a .22 caliber rifle as part of a swelling chorus of protest against the Vietnam War. Even earlier, when he painted his famous tableaux of a young boy running downhill, “Winter” (1946), the wounds of the Second World War were still intensely raw.

It was not the 60 million deaths of the war and genocide that most affected Wyeth. Rather, the demise of his father caused a caesura in Wyeth’s life. “Winter” is a portrait of his father, who was struck and killed by a train. As in “Christina’s World,” he’s not physically present, but his presence is felt in the ochre hill swelling up to the edges of the canvas. Out of our line of sight are the fateful tracks at the bottom of the hill, a young boy running toward them.

After his father’s accident, Wyeth’s everything was imbued with death. Even his colors became browner, duller. Wyeth would never leave Chadds Forth and neither would the looming sense of mortality he associated it with.

An excellent, multi-faceted exhibition catalogues our understanding of Wyeth and his relationship with death, among other things. Christine B. Podmaniczky explores Wyeth’s fascination with the First World War. The essay “Andrew Wyeth’s Black Paintings,” by Gwendolyn DuBois Shaw, challenges the “always-unequal relationship” between the painter and his Black subjects and his erasure of Black bodies in a way the exhibition does not. Shaw will speak about the topic at the museum November 30.

The portraits of Wyeth’s Black neighbors in Chadds Forth are grouped together in a large gallery. Wyeth’s raw talent radiates from the half-finished paintings and barren tableaux—which is why this room is one of the high points—but it glosses over the painter’s domineering eye. An examination of portraiture should also be an analysis of power.

Another case in point: the portraits of Siri, a 13-year-old girl who lived in an old farmhouse outside Cushing, Maine. In “The Sauna,” she sits in her Finnish family’s sauna, her breasts bare. “It was not exhibited publicly until 1973, when Wyeth felt that Siri had come of age,” a placard reads, anticipating visitor unease. It avoids saying what viewers feel: This is a young girl, her body stuck between childhood and adulthood, subject to an older man’s gaze. The skewed power dynamic is unsettling.

It’s all the more surprising then that Wyeth’s possibly adulterous relationship with a grown woman, Helga Testorf, created such a stir. Wyeth became “smitten” with Testorf, who worked in the Kuerners’ home. He painted her more than 200 times without the knowledge of his wife or Helga’s husband. The painterly—and allegedly sexual—liaison was exposed during an exhibition at the National Gallery of Art, the museum’s first dedicated to a living American painter. Critics dismissed the work as tasteless, signaling Wyeth’s downturn.

Unjustly so. His portraits of her are some of his most arresting work. “The Braids,” an intimate close-up of Helga, is often referred to as “the American Mona Lisa.” He traces every wrinkle and every hair with the finest lines, but Helga remains a mystery, an unknowable woman. The scraped lines suggest that in love as in portraiture, we can never truly know someone.

Which is true too, for the portrait of a painter that a retrospective is. You can and you should get up close to inspect Wyeth’s technical prowess, his impossible white winter light, the finest strains of hair and the harshness of his landscapes. But no matter how close you get, you can never know Wyeth’s turbulent inner landscape or what he left outside the frame. “I prefer winter and fall, when you feel the bone structure in the landscape—the loneliness of it—the dead feeling of winter,” he once said. “Something waits beneath it. The whole story doesn’t show.”