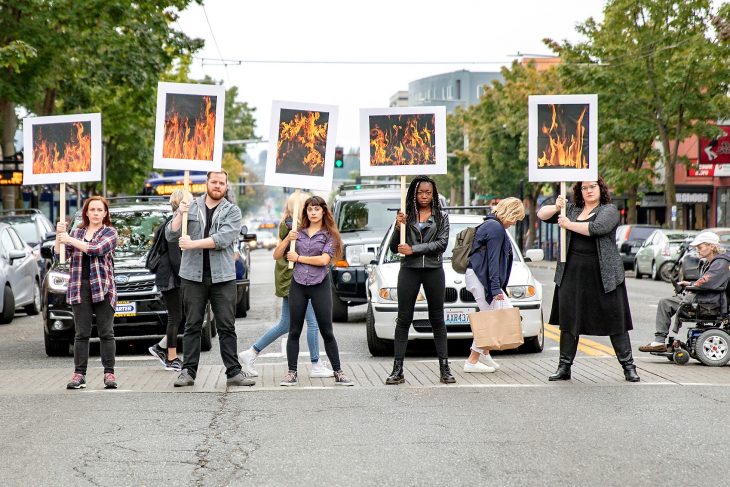 Anansi and the Halfling

I’ve been looking forward to this new play, about a young woman descended from an ancient line of storytellers, ever since I interviewed playwright Madison Jade Jones for our annual Fall Arts Guide. “We don’t have enough practice as a society in writing characters who aren’t this heterosexual white family that has problems I can’t relate to,” she told me. “I get so worked up when we base everything around Greek plays, like those are the only gods that have ever existed. My gods are so fucking cool!” Anansi, co-directed by Brandon J. Simmons and Jay O’Leary, is full of magic, puppets, drums, movement, humans and plenty of those cool gods.

Art and activism go hand in hand, but that connection is literal in this play by James Fritz. One morning, a woman named Kat puts gas and a lighter in her bag and heads out to make a political statement. While writing about the act’s inevitable fallout, a British reviewer zeroed in on the play’s pertinent question: “Do symbolic acts ever really change the world? Or is it the slow, hard, everyday grind of small change that transforms things in the long run?” Pony World Theatre presents this U.S. premiere.

Tony Kushner’s eerily prescient 1987 play A Bright Room Called Day serves as a reminder of humanity’s cyclical tendencies. It’s set in early 1930s Germany in the apartment of actress Agnes Eggling, where she and her friends gather to discuss the rise of Hitler’s Nazi Party in the wake of the Weimar Republic’s collapse. Based on Bertolt Brecht’s 1938 play Fear and Misery of the Third Reich, Bright Room brims with contemporary anti-Reagan sentiment. In this production by theater company The Williams Project, expect great acting and a production that lets the script’s timely elements speak for themselves.

Pocket Theater serves up a smorgasbord of solo work this month with a jam-packed schedule featuring 75 performers from all over Seattle. It boasts a lot of great triple and quadruple bills, which means you get to see a lot of great work in one swoop. There’ll be comedy and drama, weirdness and poignancy, familiar names and new talent—take your eyeballs on a stroll through the full, impressive lineup to see what strikes your fancy.

Inua Ellams is a Nigerian-born, London-based poet and playwright, and his play Barber Shop Chronicles “leaps from a barber shop in Peckham to Johannesburg, Harare, Kampala, Lagos and Accra,” inviting the viewer into barber shop as “newsroom, political platform, local hot spot, confession box, preacher-pulpit and football stadium.” Barber Shop Chronicles has enjoyed two critically acclaimed and sold-out runs at the National Theatre in London; this all-too-brief Seattle presentation is brought to us by Seattle Theatre Group in association with On the Boards.

In the hands of composer/lyricist Tim Minchin and bookwriter Dennis Kelly, Roald Dahl’s beloved book about an unloved, bookish and telekinetic youngster became a Broadway sensation, and the latest addition to the roster of good-for-kids shows that are also, you know, good. At its center: young Matilda Wormwood, belittled at home and persecuted at school by the cruel Miss Trunchbull. She finds a protector in the sweet Miss Honey but ultimately learns to take her life into her own hands. Also runs Jan. 4–Feb. 8 at Village Theatre in Everett.