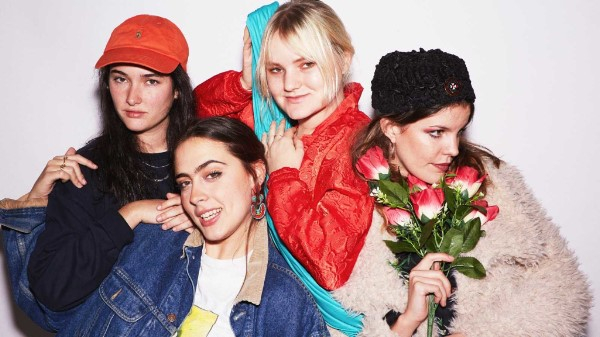 The Strokes are SO MUCH COOLER when they’re women. OK, that’s an unfair quip—Spanish quartet Hinds is their own independent, autonomous entity—but the truth remains: In 2018, cheeky, assertive, melody-rich garage rock is far more interesting when delivered from a female POV. Hinds’ second album, I Don’t Run, radiates frothy insouciance and genuine human compassion, with group-sung vocals, slashing guitars and smart songwriting. This show will be rad. —Jonathan Zwickel
Crocodile

I’m curious about this adaptation of Macbeth by actor, director and playwright Erica Schmidt, who gives over Shakespeare’s story to seven young women gathered after school to tell the tale. As they dive further into the tragedy, “the line between real life and bloody fantasy becomes increasingly blurred.” Sounds cool, no? Having A+ circus performer Lorenzo Pisoni as movement coordinator only sweetens the deal. Runs through June 17. —Gemma Wilson
Seattle Repertory Theatre

Take it Out in Trade

Screw that condescending “so bad it’s good” blarney: Filmmaker Ed Wood Jr.’s oeuvre is more genuinely entertaining than 99.4 percent of the films currently constipating multiplexes. And a surreal, previously lost 1970 detective story/porn flick from the director of Plan 9 from Outer Space and Glen or Glenda will be catnip for the right kind of weirdo. —Tony Kay
Grand Illusion Cinema

Egan’s Ballard Jam House is an overlooked gem of a venue that’s ripe for comedy, and a new stand-up showcase aims to make use of its jazzy vibe and intimate showroom. The inaugural edition features some local favorites along with Seattleite-turned-PDXer Milan Patel, a unique performer who was named one of Willamette Weekly’s Funniest Five last fall. —Brett Hamil
Egan’s Ballard Jam House

Written by Y York and starring Demene E. Hall, solo show Sycorax brings to life an unseen Shakespearean character: the powerful witch of the title, mother of Caliban, banished to The Tempest’s island setting by some fearful dudes for being hella powerful. In this version she gets to tell her own story, be more than the “foul witch” magician Prospero says she is. —Gemma Wilson
18th and Union

Northwest Folklife Festival is one of the largest and longest-running multicultural festivals in the nation. Every Memorial Day weekend for the last 47 years, Folklife has filled Seattle Center with music and food from around the world, totally free of charge for the people of the Pacific Northwest. This year more than 5,000 performers will play on 26 different stages for four full days.
Seattle Center

Nearly every Saturday, Zac Levine and a squadron of top-flight DJs throw down a serious dance party, often with a hearty snifter of vintage disco and funk, until the wee hours, in a Chinese restaurant/karaoke bar built from old railroad passenger cars. And damn if it isn’t fun as hell. —Tony Kay
Orient Express (Sodo)

One delicious night leads to another. A couple weeks ago, at the No Cookbooks Allowed popup at Sugar Hill, I shared a table with three charming, gracious foodies, including Irbille Donia, founder of the dearly departed Kraken Congee. They hipped me to their latest project, which tonight brings a Filipino popup to one of Seattle’s most elegant dining rooms. The menu looks fantastic and includes a fair share of Bateau’s artisanal beef. —Jonathan Zwickel
Bateau