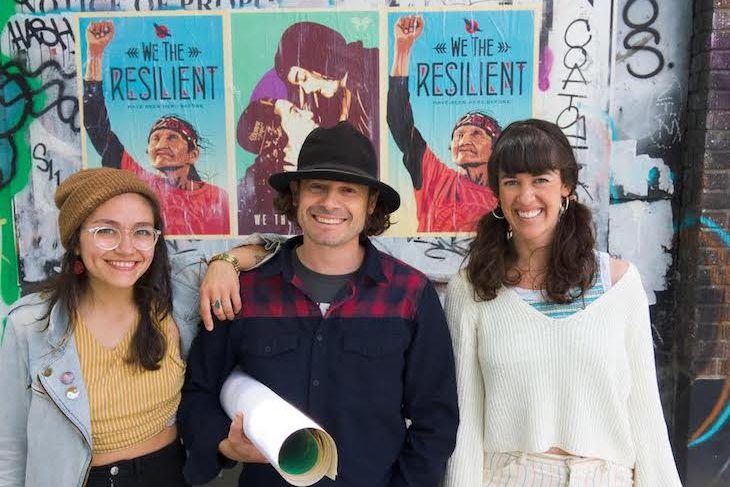 How do you follow up the most successful viral art campaign in human history?

Over the course of eight days in January of last year, 22,840 people contributed $1.36 million to We the People, the art-as-activism campaign launched via Kickstarter by Seattle-based Amplifier (formerly the Amplifier Foundation). The campaign began in the wake of the November 2016 election and reverberated through the nationwide Women’s Marches the following February. Since then, more than a million people in 195 countries have downloaded free We the People poster art from Amplifier’s website—images and slogans which have been seen in marches, protests and rallies around the world.

During that time, Amplifier—the self-described “art machine for social change”—has accrued a massive amount of social capital, not to mention actual capital. So what next?

“We knew it needed to be more than a protest moment,” Amplifier founder Aaron Huey says of the nonprofit’s direction after We the People. “How do we take those same kinds of messages—reclaiming the American identity and the people we want to be, the future we want to live in—to new audiences and connect them to materials that people could dig into, that can be part of their lives and their work?”

Huey and Amplifier’s new staff, comprising program director Cleo Barnett and operations manager Isabella Sisneros, are sitting in their new office in Pioneer Square. Murals and poster art—much of it designed for We the People or other Amplifier campaigns—adorn the white walls. This sleek, comfortable office/gallery/gathering space represents one part of the answer, providing a physical presence in the city that’s long been Huey’s base of operations as a world-traveling National Geographic photographer.

After meeting Barnett at a show she curated at roving gallery LoveCityLove, Huey enlisted the New Zealand-born curator as Amplifier’s first hire. Sisneros initially entered the fold as an LA-based logistics manager during the We the People campaign, after which Huey recognized her tremendous contribution, as well as her profound dedication to the project. Both Barnett and Sisneros relocated to Seattle only a few months ago but have dove headfirst into Amplifier’s next programming phase.

With a major announcement coming sometime this month, the crew tells me that the org’s latest chapter boils down to a simple concept with limitless potential: youth education. “When I look at the middle of America, in places where I grew up, I don’t have a lot of faith in the adults,” Huey says. “But we can still reach children everywhere with these ideas.”

Aimed at educating and empowering youth around civic engagement, Amplifier’s upcoming initiative is called We the Future. Through social media and direct communication, Amplifier staff learned that educators across the country and at a wide range of age levels were already integrating the ideas behind We the People into their curricula. By surveying some 2,000 teachers spread through every U.S. state and working with an education specialist, Amplifier has oriented around a handful of key issues pertinent to American youth, such as climate change, juvenile justice reform, education, mental health and voting; they’ve also determined organizers and leaders within those areas. These leaders and the groups they work with are all networked via Amplifier, sharing issue-themed artwork by Amplifier-commissioned artists and teaching points developed by teachers within Amplifier’s education cohort. Their goal with We the Future is on par with their stunning achievements with We the People: to bring message-based artwork to 20,000 classrooms across the country by the end of the coming school year.

“We consider ourselves backend support for movement leaders,” Barnett says. “Our mission is to provide people with tools to participate in democracy. We’re raising the visibility of social justice issues through reclaiming our visual landscape, taking back ad space, putting out positive messages of social justice that can connect us to our shared human values.”