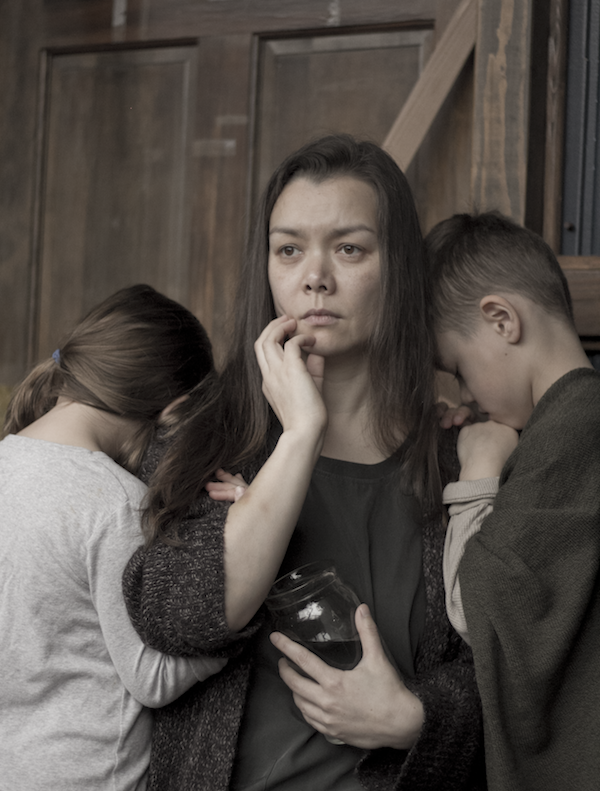 Time and timeliness are tricky things when it comes to theatre—how do you stay responsive to the world around you without being blown off course by every shift in the social climate? Classic plays, shellacked with marketing verbiage about their eternal relevance, are programmed cheek-by-jowl with new plays, plots practically ripped from the headlines. But sometimes, when a writer intent on inventive storytelling responds subtly to the electromagnetic pull of the zeitgeist, timeliness comes to you.

When Brendan Pelsue started writing Wellesley Girl in the spring of 2015, Donald Trump wasn’t yet a candidate for President. When it premiered at Humana Festival in the spring of 2016, he was still half a year from being elected. The play, which opens on April 13 at 18th and Union, presented by The Horse in Motion, now exists in a very different America than the one in which it was born.

Wellesley Girl is set in the year 2465, some two centuries after an ecological disaster has wiped out America, save for four small cities in Massachusetts protected by filter and barrier systems designed by MIT scientists, which were being tested locally to see if they had national application when disaster struck. Now, because there are fewer than 435 adults remaining, everyone eligible is a member of the House of Representatives.

“They thought that they were the only remaining Americans, and pretty much the only remaining humans on earth,” Pelsue says. “As the play opens this group of people shows up—potentially invaders, potentially not—and for the first time in a long time, the remaining Americans have to really use the machinery of their democracy to make important decisions, as opposed to just dealing with their small-town problems.”

Pelsue points out that any play written about the three branches of government has a built-in shelf-life for relevance, because it will always feel a bit like the news. “But one of the things I hoped when I was writing the play is that it would, without being about any one political issue, be elastic enough to contain a lot of thoughts I have about politics in general,” he says, “and a way to engage with the idea of the political process as something we are all unified by—in the sense that it affects us all, not in the sense that we all feel united in our relationship to it.”

“What changed for us is the question of individual agency,” says Bobbin Ramsey, a co-founder of The Horse in Motion and Wellesley Girl’s director. The company programmed the play well before the election, but their intention behind it fundamentally changed after the results were in.

“I don’t even remember where I first heard it, but I remember the headline If ‘Did Not Vote’ Had Been a Candidate in the 2016 US Presidential Election, It Would Have Won by a Landslide,” Ramsey says. “That just raised the question of: what responsibility do we have to democracy, and what responsibility does democracy have towards us? It became less about looking at politicians, and more about looking at citizens.”

For The Horse in Motion, which has to date focused on nontraditional forms like immersive and site-specific theatre, Wellesley Girl is a very intentional departure in style, if not in substance. “In some ways, I think people just got excited about the surface-level idea of doing something new, to be perfectly honest,” Ramsey says, of the appeal of her company’s earlier shows. “Gimmick is a strong word, but there was one thing we did that sort of sustained us.”

What THiM really wanted to do, she says, was continually expand the conception of theatre, and when you end up doing one thing over and over again, no matter now nontraditional the style, it gets predictable. “So this is a departure. It is more conventional, and we’re now using our mission statement to focus on the intellectual engagement of our audience as they watch this play.”

What does it mean to ask an audience not to be complacent in their theatergoing experience? Can you engage people mentally without asking them to physically engage, if that’s what they’re used to? It’s a gamble. When a young, vibrant company meets a young, vibrant playwright, the chances of ideological spark bursting into theatrical flame are good, but it’s still an experiment—Is the material ready? Is the company?—and that’s what makes it exciting.

“This is a play about politics, and sort of like politics, it’s funny until suddenly it isn’t,” Pelsue says. “It will be interesting to see where funny and isn’t happens, when you’re watching this play. Depending on the tenor of the country, what’s funny and what’s not is very different.