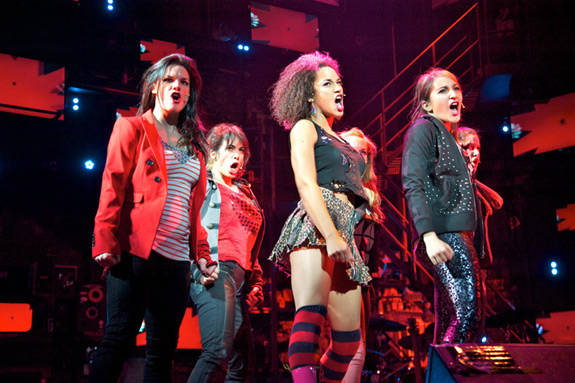 Though Green Day’s American Idiot is a concept album, its “concept” is more thematic than narrative; there’s no clear storyline. In the broadest sense, the 2004 release is a coming of age story of a bored young suburbanite who ventures off to the big city and returns in disillusionment. It’s a thin narrative on which to hang a full-blown musical. But Michael Mayer, the Tony award-winning director of the musical Spring Awakening, loved the album and was determined to bring it to the stage. He and Green Day’s lead singer/guitarist/primary songwriter Billie Joe Armstrong fleshed out the piece by adding songs from Green Day’s 2009 album, 21st Century Breakdown, used the diary format of the booklet included in a deluxe packaging of the American Idiot album to shape the story, and, most importantly, split the lead character into three different people.

The show premiered in Berkeley, California in 2009, followed by a year-long run on Broadway. The touring production of the show arrived in Seattle on June 5, though sadly without the lavish sets that won a Tony for Best Scenic Design for a Musical. It’s still a dizzying spectacle, with dozens of TVs perched in the scaffolding that provides the backdrop, creating an urban jungle gym that the young cast continually climbs on throughout the show—an apt metaphor for a group of adolescents who never find their way to maturity.

The main protagonists are three disaffected youths: Johnny (a live wire Van Hughes), who goes to the city in search of adventure; Tunny (Scott J. Campbell, the stolid, dependable type), who enlists in the military; and Will (Jake Epstein, relegated to the couch for most of the show), stuck at home with his pregnant girlfriend. Throw sex, drugs, and rock ‘n’ roll into the mix, and a comparison with Rent is inevitable. But there’s one major difference; Rent is a story of hope, the characters dedicated to enjoying life to fullest, actively working for a better tomorrow, while the cast of American Idiot remains mired in despair. The performances are full of energy, but a hard cynicism is never far away. Tunny is literally seduced into the military by women wearing sparkly dresses of red, white, or blue; Johnny’s first embrace with his new girlfriend climaxes with their shooting up together, entwined in the tubing used to tie off their arms. Meanwhile the television sets continually flash messages of defeat and turmoil. (There is one misstep, when Tunny hallucinates while on morphine in the hospital, doing an aerial dance with a fantasy woman; that she’s a Middle Eastern belly dancer is a cringe-worthy touch).

For all its flash and vigor, American Idiot remains unrelentingly depressing. All the characters are left diminished by the show’s end: Will abandoned by his girlfriend and child, Tunny home from the war but missing a leg, Johnny an office grunt bereft of his dreams. Though not listed in the program, at the show’s end the cast returns to perform “Good Riddance (Time of Your Life),” a song of seeming optimism used for countless graduation ceremonies and weddings (though ironically, Armstrong had written it as a kiss-off to a former girlfriend). Here it becomes even more bittersweet, saying in effect “We hope you had the time of your life—because things aren’t going to get any better.” It’s a depiction of generation unable to find the drive to change their own dire circumstances, making the future chillingly bleak. American Idiot  is one of Green Day’s best records. The stage show drives home its true grimness.