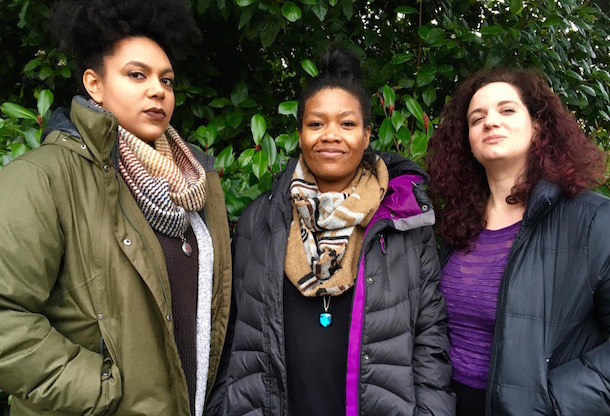 Alyssa Explains It All is a new live comedy show that premiered last September to a sold-out crowd at 12th Avenue Arts. Now creator and host Alyssa Yeoman and writers/performers Monisa Brown and Natalie Holt are gearing up for their second episode on Friday, Jan. 27. I got together with them on Capitol Hill to talk about how the show got started, what it takes to create a hit right out of the gates and what to expect from their next performance.

I missed the first show, but practically everyone I know in comedy commanded me to see the next one. Can you explain the show’s premise?
Alyssa Yeoman: The show is a sci-fi comedy talk show show-within-a-show. [Laughs] How do I best describe it?

Natalie Holt: So, Corporation Incorporated—an interdimensional synergy corporation—hired Alyssa to explain the meaning of life through this talk show. There’s this kind of show within a show that happens, with Alyssa and her producer and this android that the corporation sent to make sure that nobody was swearing. We got a glimpse that the corporation is up to some misdeeds, some evil purpose, and they might be using the show to further that agenda.

Is Alyssa the host of the show?
Alyssa: Yeah, she’s the host. She just happens to be the face of the show. The character Alyssa is very vapid and shallow and a little bit naive and childlike in her ways. A huge dynamic that happens is that her producer and best friend Evelyn keeps her in line and is kind of the one moving the show forward, whereas Alyssa is just excited to be on TV. And she’s had failed TV shows in the past. Alyssa’s Victim’s Unit was one of them.

Monisa: In the first show I played a character called Nell DeMasse Bryson, and I was like the top black female physicist in all the dimensions, but I was also a lady killer. It was a really fun character to play and I feel like I broke some hearts on stage that night. I didn’t have the intention of doing that.

Natalie: I’m surprised you haven’t gotten any fan art for that.

Comedy origins and influences?
Monisa: I’ve been doing standup comedy for two years now. In high school and college I did a lot of theatre. Now, I’m one of the producers at the Comedy Nest and I feel like that’s really where my interest in comedy was sparked. I have this sketch comedy trio called Queerz. We’re hilarious! In general, what made me really appreciate comedy was Chappelle’s Show. That’s really inspired me, since I was a little kid.

Natalie: I’ve been doing comedy for two and a half years. I also produce at the Nest. I do a lot of standup; I do a podcast with Maddie Downes, Sexual Awake ’n’ Baking. Comedic influences: NewsRadio. This show in particular, I think we draw on a lot of sci-fi, Star Trek.

Would you call yourselves nerds?
Natalie: No, we’re cool jocks! [Laughs] Yeah, I’m a total nerd. Did you ever play the Space Quest computer games? Oh my God, I’m alone on this one.

Monisa: I’m in the closet about it. “Oh yeah, I may have heard about that kind of stuff.”

Alyssa: I actually never felt like I was cool enough to be a nerd, because my older brothers were nerds and they knew everything and I didn’t, so I just absorbed everything through osmosis.

How did you all come together as a crew and what inspired the show?
Alyssa: I did a really cool show with the Washington Ensemble Theatre called the Six Pack Series. And as a part of that show you get a liaison from WET to help you continue your work. My liaison happens to be Samie Detzer, who is the artistic director of WET, and she was like, “Do you want to do a show?” Natalie and I initially came up with the name Alyssa Explains It All, and we batted around ideas for a long time about what it would be. Should this be a standup showcase? Should this be a panel? I think we were looking for an opportunity to try more comedic acting. It’s a totally different muscle to stretch and a reprieve from doing standup all the time.

So at that point I asked Monisa and Natalie to come on and help me write. Then I started building a list of the people that I thought were great standups and performers—it ended up being 10 of us altogether. The idea to take it out of this universe actually came from a conversation with all 10 of us when we were at a table at our first meeting. I don’t even know who said it or how it happened, but all of a sudden it was like “We’re taking this into space.”

Natalie: We started going “What if there’s an android, and what if there’s a bunch of dimensions.” It really opened up a lots of stuff. “Cross-dimensional calling” was a commercial we did; we did “Family Matters Shakespeare.” I loved that people brought lots of things to it. It was really cool to see people jumping in.

Monisa: Just leaning in so hard to their characters, bringing so much more than we asked them to. And I think that’s really what made that first show so special, because everybody went so hard.

Alyssa: I was worried and then people had costumes made and stuff. It was so great. Everybody in the cast I really like as a person and really admire as artists, so it was so nice that we were artistically compatible!

One comic described the first show to me as “Woke as fuck.” Can you give me an idea of what that might mean?
Monisa: Maybe because it wasn’t all white dudes? [Laughs]

Monisa: We joke about it. We’ve got our token white CIS guys who have really small parts.

Alyssa: We didn’t even let them on the stage! We are letting a white guy on the stage in this next episode, so nobody fret.

What else to we have to look forward to in the next show?
Alyssa: Adventure. Surprises.

Natalie: Androids learning about themselves. Creating an interdimensional family of misfits.

Monisa: Oh, the next one’s about death. It’s the afterlife! What happens? We don’t know. Exploring the idea of that. I don’t know if you want to tell who the guests are or…

Alyssa: We’ll leave that as a surprise. There will be an appearance of Whoopi Goldberg, I’ll let everybody know that. I know that’ll really get people in the seats.

Natalie: You might see some characters from the previous show. Some fan favorites. And there’s only two more episodes for this current story.

Alyssa: We have only two more episodes for this story, but then you can look out for us next season.

Are you nervous about basically starting a show out as a wild success? Because that’s not usually what happens. In my experience.
Alyssa: I was born for this.

Alyssa: The thing is, people don’t want to put in the business work of it, the promotion and the producing part. If you can do that and you already have the talent to write and do other things, your show can be successful. I think people don’t like planning or being strategic about the way you promote something and that’s ultimately what’s going to fail you. So you have to take the bad with the good and then you can produce something great. We started working on this in July. It wasn’t something that was thrown together. It took a lot of brainpower and hard work, but it all paid off.

Natalie: There was a steep learning curve and it all came together so well. None of us had ever done anything like this on such a big scale.

Monisa: Everything that I had done before this was like six-minute sketches. And then we all wrote a 45-page script together. I feel like people told us that it was going to be too weird. There was also some doubt among us sometimes.

Alyssa: I was very scared for a little bit there. [Laughs]

Monisa: We all thought that people wouldn’t get it. But we all trusted each other and worked so well as a team.

Natalie: And we trusted the audience. They’re not a bunch of dummies that are going to be like “Oh, I don’t understand! How you can you have a robot in space?” I do think at certain points we were all scared, and I don’t know if you’ve ever tried to get 12 comedians to do a tech rehearsal before. It’s so hard! [Laughs]

Alyssa: We learned a lot about corralling people for sure. I’m glad the first one was successful, because everybody’s showing up ready this time, in a totally different way. Even myself! There’s a lot less worry, a lot less uncertainty. Because now we know that we can do this.

Natalie: But now we’re stepping it up, testing our limits again, adding filmed stuff and other new things to worry about.

Where do you want this thing to take you?
Alyssa: Straight to Hollywood, baby!

The second episode of Alyssa Explains It All runs for one night only on Friday, Jan. 27 at 12th Avenue Arts. Tickets go on sale Friday.