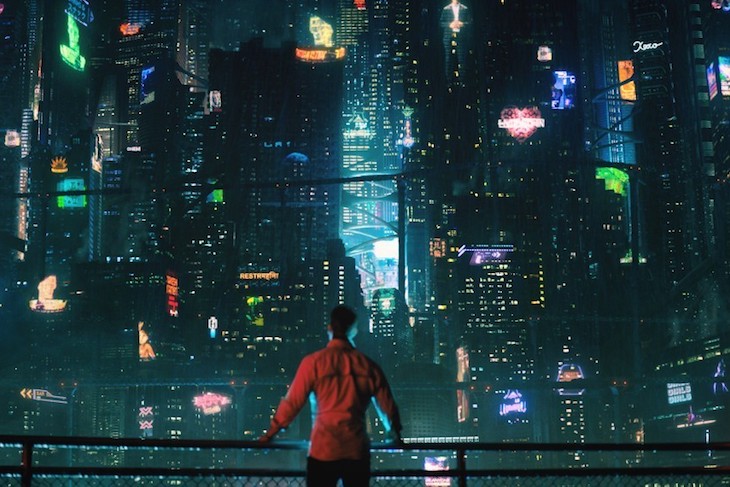 Dystopian sci-fi is the domain of the mad scientist. A sample of living tissue from the present is placed in a petri dish then bombarded with time-lapsed forces that cause it to mutate and metastasize into something monstrous. The resulting creature then emerges in all its freakish horror as a warning of what could happen if current conditions persist. The shock of recognition drives the genre’s appeal, a novel sense of familiarity upon beholding an entirely new creature descended from our own DNA.

But what happens when that mutant spawn starts to look too much like us, when the ghastly homunculus smirks back at us with our own eyes?

In these grim times I’ve become a connoisseur of dystopian sci-fi series [see here and here], enjoying each ingenious iteration of our ill-fated future under the reassuring premise that things could always be worse. Watching the new Netflix series Altered Carbon, I was confronted with a notion I hadn’t considered: What happens when we catch up with dystopia?

We can all agree that reality has definitely surpassed satire at this point; visit Trump’s Twitter timeline if you disagree. Accordingly, we’re up to our ears in dystopia: Black Mirror, The Man in the High Castle, The Handmaid’s Tale, The Hunger Games trilogy. As many have remarked, we live in the alternate universe where Biff Tannen is president. In that light, every futuristic sci-fi venture becomes less an exercise in prophecy than in analogy. The question becomes: Do people in a dystopia still enjoy watching dystopia?

The signature mutation in the Altered Carbon petri dish is technological: Human consciousness can now be stored digitally in a piece of hardware installed in the back of the neck, called a “stack,” which enables life to persist beyond the current body, now called a “sleeve.” But before you can appreciate all the exciting implications of human consciousness untethered from the fragile human form—too late! Vast wealth inequity has made stack technology unattainable except for the ultra-rich. The average person can’t afford to “re-sleeve,” while billionaires have created an entire clone backup system that essentially allows them to live as immortals, called “Meths” (short for “Methuselahs”).

Enter Takeshi Kovacs, a highly trained resistance fighter, called an “envoy,” from 250 years in the past. He’s been pulled out of cold storage/imprisonment and re-sleeved to investigate the (temporary) murder of a Meth. Thus deputized, with an unlimited expense account and extensive mayhem-making skills, Takeshi encounters all the novel developments of this future world in the course of his mission. The series bears glimmers of its sci-fi predecessors: the depraved aristocracy of The Hunger Games, the mystical reality-hopping squad of freedom fighters of The Matrix, the endless human suffering in virtual worlds explored in Black Mirror, the meditations on sentience and artificial intelligence—and the urban planning—of Blade Runner. It’s a deftly executed, sleek action vehicle in which most of the implications and paradoxes of the world are plausibly explored. There are plenty of gory battles, centuries-spanning flashbacks, overwrought dialogue and gratuitous nipples. The series provides the most intellectually defensible justification possible for a swordfight involving a half dozen naked women.

As usual, the biggest beneficiaries of the technological advancements in Altered Carbon remain the same: billionaires and perverts. And especially billionaire perverts. They get off (pun intended) pretty much as well as they do currently. Their grip on the power structure hews closely to what you’d hear at a Democratic Socialist meeting in 2018; Meths run the cops, the courts and the politicians. A ragtag band of fiercely dedicated rebels plot to bring them down.

Meths are wanton douches sleeved in youthful, custom-cloned bodies who live in mansions above the clouds. They’re the 1% making the best of a good thing the way they always do—fangs bared.

Here’s my problem: The Meths have the accumulated wisdom that comes from living in human form for centuries on end and yet the most decadent exercises in ultra-wealth they can muster are thrill-killing sex workers and commissioning zero-gravity knife fights to the death? One would hope that human consciousness would strive for something nobler and more creative given all that time for leisure and contemplation. But nope, in the distant future billionaires are still just creepy old selfish jerks with no respect for human life. In other words, it’s beyond our powers of imagination to picture wealth inequity getting much worse than it is right now.

It comes as some consolation that we’ve become increasingly comfortable admitting that billionaires are villains, near-untouchable avatars of cosmic greed who inflict vast suffering on the masses by the very nature of their existence. The future is socialist, and so is the present. We just lack the imagination to make it manifest; we’ve become too mired in our current predicament to see a way out.

So do people living in a dystopia still enjoy watching other dystopias? Yes. But it turns out we need them in increasing levels of decadence, which Altered Carbon amply provides. Like the Meths, we suffer from a poverty of imagination; we can conceive of all manner of virtual worlds and modes of consciousness and high-concept naked swordfights but we can’t seem to envision the most basic changes to the political and economic organization of our society. We can imagine a future in which our species settles other planets and discovers the keys to immortality but we can’t seem to think our way out of capitalism. Our fictional futures fail to break free of current limitations.

The worse things get, the more the creatures in the petri dish come to resemble us, only sexier, more violent, more doomed. We can keep running this experiment ad infinitum, and it will continue to produce the same results, to varying levels of entertainment. I’m not going to stop watching dystopian sci-fi anytime soon; I’m hooked on the fatalistic thrill in that shock of recognition. But I keep hoping we can figure out how to grow a better world out of this one.