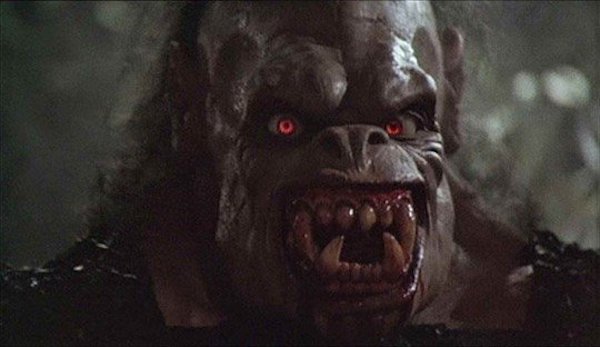 Northwest movie theaters big and small throw down at least some token horror movie programming in October, but the Grand Illusion Cinema has always invested itself, black heart and tortured soul, into the Halloween season with its annual All Monsters Attack series.

The series has endeared itself to local genre junkies over the years based on the sheer breadth and depth of its programming. AMA showcases horror movies of all shapes, stripes, and intensity levels, and the series’ triple features are stuffed with frequently-unannounced obscurities. All Monsters Attack 2017 includes certifiable classics old and new, as well as plenty of movies that are, well, just plain certifiable. Here’s a complete rundown.

The Old Dark House (Oct. 20, 21, 23, 24)
Director James Whale’s horror films were decades ahead of their time, with their flashes of self-aware, oddball humor intermingled with a surplus of spooky atmosphere. 1932’s The Old Dark House is probably Whale’s most overlooked chiller, but it’s almost as good (and at least as intentionally funny) as his stone-classics, The Bride of Frankenstein and The Invisible Man. Boris Karloff, Charles Laughton and future Titanic Oscar nominee Gloria Stewart head the cast.

The Witch (Oct. 20 – 26)
Divorce yourself from the hype surrounding Robert Eggers’ critically-acclaimed 2015 directorial debut, and just sink deeply into its immersive historical details and general vibe of unease and repression. Even if it’s not packed with jump-scares, it remains a genuinely great movie.

Rawhead Rex (Oct. 21, 26)
This 1986 shocker about an extra-nasty fertility demon wreaking havoc on a small Irish village was adapted by popular horror scribe Clive Barker from one of his short stories. It’s one of the more recent examples of a perfectly decent horror movie sabotaged by its monster, sort of a heavy-metal wolf/reptile hybrid with a widow’s peak and ridiculously-immobile facial features.

The 2nd Annual Scarecrow Video Weirdo Horror Triple Feature (Oct. 22)
The first of All Monsters Attack’s two dives down the triple-feature rabbit hole is an all-VHS presentation. Mum’s the word as to the selections, but rest assured Scarecrow Video trash-film aficionado Matt Lynch, the curator of this triple feature, is a master at finding weird (and impossibly obscure) stuff.

Damsels of Doom: Horror B-Movie Double Feature with Queen of Blood, plus a Mystery Second Feature (Oct. 24)
The first half of this double bill is a 1966 B-flick featuring special effects sequences from a Russian sci-fi epic, welded with super-cheap American-shot footage of a green-skinned vampire woman (creepy Florence Marley) terrorizing a crew of astronauts on a spaceship. It’s kinda goofy, but it presages Alien and its atmospheric touches defy the tiny budget.

The Hidden (Oct. 27 )
Jack Sholder’s 1987 sci-fi thriller follows a hard-boiled cop (Michael Nouri) and a strange fellow officer (Kyle McLachlan) as they pursue a space slug that’s fond of hopping from one human to another. One of the great mysteries of 1980s cinema is how this fast-paced and incredibly entertaining hybrid of Alien, The Terminator and Invasion of the Body Snatchers never became a massive cult hit.

Kill, Baby, Kill! (Oct. 28, 29)
Tim Burton has openly acknowledged the visual debt he owes to Italian director Mario Bava, an Italian auteur who infused his low-budget horror, sci-fi and action movies with eye-popping colors and a painter’s eye for framing and composition. This 1966 ghost story is one of Bava’s very best.

Ganja and Hess (Oct. 28, 30)
Bill Gunn’s arty, strange and surreal 1973 mix of vampire story and Blaxploitation follows an anthropologist who’s accidentally rendered immortal (and bloodthirsty) after being stabbed with an ancient dagger. Duane Jones of Night of the Living Dead fame stars.

Terror on the Menu (Oct. 28)
Presented by videotape fanatics VHS Uber Alles, this little-seen 1972 black comedy looks an awful lot like an informal influence on The Texas Chainsaw Massacre.

Nature Gone Amok 35mm Triple Feature Pizza Party (Oct. 29)
All Monsters Attack’s second triple feature will be a smorgasbord of animals on the loose, much of which will likely be drawn from the fertile schlock vein of the post-Jaws 1970s.

Otto; Or, Up with Dead People (Oct. 30)
Queercore filmmaker Bruce LaBruce tackled straight-up (pardon the pun) horror with this 2008 story of a handsome goth zombie who auditions for a role in a zombie film.

Tickets for All Monsters Attack can be purchased online or in person at the box office.