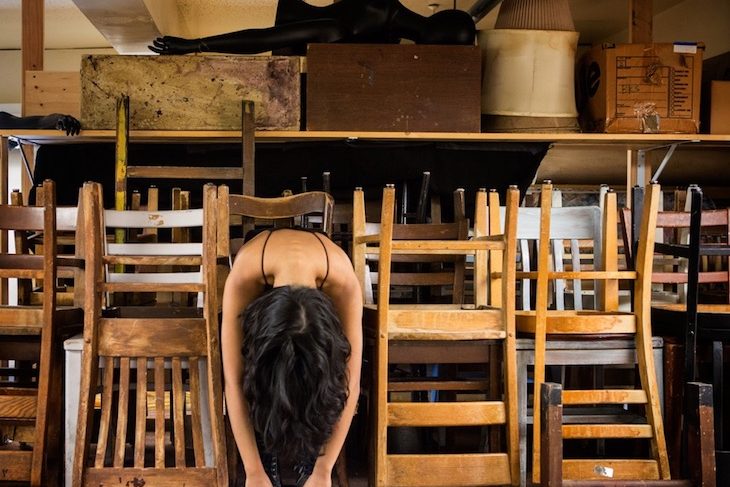 Alice Gosti is never not moving. A master of creative hustle, a tireless curator, a dancer, choreographer and director, her prolific output includes not only personal performance, but ongoing projects like Yellow Fish Epic Durational Performance Festival and massive durational pieces such as 2015’s How to become a partisan, inspired by the stories of individuals who participated in the Italian Partisan movement.

Her most recent undertaking is a work of experimental theatre called Material Deviance in Contemporary American Culture, featuring 10 performers and opening March 29 at On the Boards. Usually one to site her performances in nontraditional places—cathedrals, galleries, kitchens, the waterfront—this marks the first time Gosti has created a work for the OtB mainstage. I met her on a recent Friday afternoon for a chat between rehearsals. We delved into the central question Gosti poses in this new work: Do objects imbued with so much of our worth start to take over and take on a life of their own?

Why are you thinking so much about objects?
This piece is based on the way the objects we own define our identity. One of the biggest inspirations for the creation of the piece is hoarding.

Are there hoarders in your life?
To some degree, we’re all hoarders. It’s hard knowing how to consider it—is this an actual illness, or is it just an affection, a connection to objects because they remind us of people, places, and we get entangled with them?

Why did you become so enthralled by this subject?
I was at a Christmas family thing and reading a New Yorker three or so years ago. There was an article talking about hoarding and the way the writer described the spaces just blew my mind. I was both disturbed and endlessly fascinated by the idea of a labyrinth of objects. It haunted me. As I developed my next project that imagery kept coming back to mind. It seemed like an impossible thing to create. I thought about staging something at a hoarder’s place, but most are very private about their spaces. And of course, most are not hygienic for an audience.

Are you tired of durational performance?
Oh no! I don’t think I’ll ever be tired of durational work. I think at this point in my personal career, things are going really fast. I think I’m a person who falls into curating out of necessity more than I want to be a curator. I want to be around durational work, but at the time [I started Yellow Fish in 2013] I wasn’t finding ways and places to fit that. I saw a need and I knew how to put that together.

But you’re done with Yellow Fish, right?
I passed that on to Babette [Pendleton] and she has a different team now. After the last one I decided that I was done with it, but I had intentionally built it with the idea that it would last forever, so I began searching for another person to take my role. Babette’s working on a lot of new aspects of it, expanding it out into the city a little more.

You’re doing the opposite with this piece.
One of my fears of doing a piece like this is that it’s not site-specific. Black boxes have a fourth wall, that imaginary wall that closes you out. I’ve never been interested in that format. It mimics TV to me.

Then why do it?
Partly the politics I want to convey don’t work in this [durational] form of storytelling. This story has a beginning, middle and end. Humans are free to come and go in durational work. I’ve always thought of durational performance as something that has a beginning and end, but those two points are something you don’t have to witness. This work feels more traditional in a way. It’s non-linear, but the beginning and the end is something the audience needs to see.

You’re asking the audience to participate in a ritual too?
I wanted to know, how can I involve people even when they’re sitting in their seats? What if we constructed rituals so people can get rid of something? It’s dealing with that way of thinking: This fork my grandmother gave me, I don’t really have any reason to keep this, it has no value in society apart from me so I’m gonna keep it. The idea is including these objects as part of the set.

Are you including some of your own objects?
I’m putting in the luggage that I moved here with, the backpack I moved here with and some of the things that belonged to my memories of Italy. They live in a storage unit now. An ex-boyfriend’s t-shirt. Some photos from this photo album that I found on a street in Berlin. It was clearly this vacationing photo album from a family from East Berlin before the unification. I couldn’t leave it on the street…but what am I gonna do with something like that?

Wow, yeah.
As a non-capitalist person, there’s a part of me working with this project that wonders why do we have so much shit and why participate in the cycle? I’ve learned in the making of this piece I’m more interested in the questions I can generate than telling you my political opinion. It’s asking why we fall in love with objects. So the set is going to be designed in a way that’s a monolith of shit that somebody has cared for at some point, or still cares for. I’m fascinated if we’re able to create invisible threads between audience and objects that they used to own. It’s a big experiment. I’m not sure it’s going to work, but I want to know, how much do we need to create this level of invisible participation?

Are you destroying the objects after the show is over?
I’m not sure. I might need another ritual, but I’m not sure what that is. Destroying them doesn’t feel right because I feel like I’ve inherited all these stories. It could be donation, burning, garage sale to raise funds to go to an organization. I don’t know yet, but that’s OK.

What’s next on your plate?
I’m working slowly on a new solo. I want to work on immigrant stereotypes and exoticism. As an Italian person who’s been here 12 years, I want to talk about, for instance, the way I’ve been exoticized because of my accent. A lot of my research and writings about my experience are making me realize this is why I was made to feel shitty. Like, I don’t want to talk to people in elevators—I don’t want them to hear my accent, have to explain my story and then have to listen to your Italian vacation stories. I’ve been looking at a lot of TV shows like Master of None and Fresh Off the Boat—shows that are trying to create pop culture around specific cultures, but talking about those cultures without the need to go to stereotypes or exoticism that’s diminishing. It feels right now that that is something I need to do. It will start with a solo show then move to community projects and engagement with immigrants—then a group piece designed and produced exclusively by immigrants.

Speaking of Italy, you’re performing How to become a partisan there?
Yes! Not in a cathedral, but in an old armory space that almost feels like a cathedral, with big arches and lots of glass. It’s really exciting because it was so rooted in the Italian Partisan movement. It’s really exciting for me to think about how it’s going to translate to the population that has lived through it. We’re going to the town where I originally interviewed people for the piece. A lot of them are in their 90s—it will be interesting if they come!

Material Deviance in Contemporary American Culture runs at On the Boards March 29–April 1. On March 25, from 2–5 p.m., Gosti invites visitors to participate in a Community Ritual by bringing objects of their own to contribute to the piece. This event is free and open to the public. Learn more here.