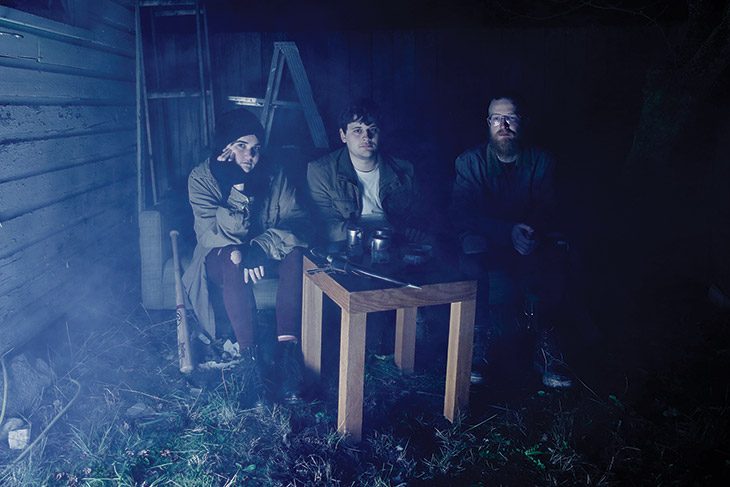 Love in the time of Trump is a fraught and fractious thing and rock ’n’ roll is troubled by questions of relevance, and then along comes a lovelorn indie-rock album that articulates the present moment with an almost preternatural emotional accuracy. Scarves’ Dinner Dates for the End of Days plays like late summer, dutifully clinging to the fading warmth of a golden moment passed, beautiful and heartbreaking. The sophomore effort from the Seattle trio is an extraordinarily compelling confluence of words and melodies, of evocative lyricism and plucky, swerving guitars, and it packs a lot of emotional baggage into its 10-song, 34-minute run time. Heavy as it is, it flows with a swift, unburdened velocity, as much a literary landmark set to music as a collection of potent jams bolstered by a singular singing voice.

Bandleader-singer-guitarist Niko Stathakopoulos writes with imagistic concision and a relaxed attentiveness to rhyme that suggests poetry. “Crushed Ice,” Dinner Dates’ third song and a compositional blockbuster, opens with this tiny masterpiece: “Your sister heard whispers of the divine/In florescence/So she gathered every strobe light/She could find/And held a séance.” The song’s somber key and the languid pacing of its intertwined guitars recall Built to Spill at their most pensive, seductive. And then the aching chorus, “You were coming through/Like light through broken glass.” Floating behind Stathakopoulos’ keening vocal, guitarist Nessa Grassing sings extra detail. It crescendos into mania with Stathakopoulos declaring “It’s just a trick of light!” before decelerating into wordless, reverby murmurations. Phew.

Two songs later, “Arrow” rushes in certifiably upbeat, the song that most clearly reflects the gut-punchy, post-emo aesthetic of Hutch Harris, leader of recently defunct Portland punk greats the Thermals and producer of Dinner Dates. The song is a gentle sledgehammer, Stathakopolous singing a chorus that shoots at the heart of our postmodern predicament, sober and aspirational, vague but deft: “It will get more complicated before it gets clear/But the sound of it all coming together/Is the sweetest song you’ll ever hear.”

Stathakopolous’ voice could ungenerously be described as “an acquired taste,” but personally, I’m smitten. I hear an urgent, ingenuous plea, boyish in its register but wry and acrobatic in its phrasing. A voice that knows something, including some inkling of all it doesn’t know. Stathakopolous lulls certain syllables, inflates others, improvising a roadmap while keeping a clear destination in mind.

The album’s semi-symmetrical construction is equally satisfying. A lyric from “Shelter,” the kickstart opener, resurfaces in “Dinner Dates,” the sprawling epic of a closer, and it’s the thesis statement of Dinner Dates, simultaneously a warning and an affirmation: “So when the big one hits/And the waves crash across the coast/Keep close.” Apocalyptic, intimate, practical—and punctuated by a bright blast of trumpet, like a heavenly herald. These are strange days we live in; here’s the right song for them.

Dinner Dates for the End of Days will be available digitally and on standard and special edition green-blue smoke vinyl on Sept. 28, 2018.