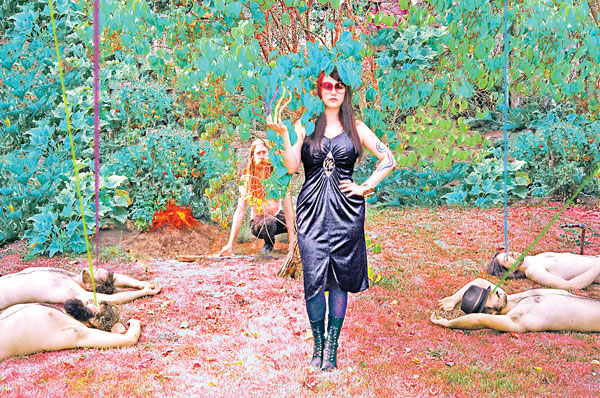 Midday Veil
This Wilderness
Beyond Beyond Is Beyond

After years of hedging and surreptitious fandom, the indie-rock cognoscenti finally confesses to its longstanding, latent appreciation of the Grateful Dead. Maybe it’s the Dead’s icon-confirming 50th anniversary this year or the band’s industry-shaking farewell concerts in Chicago or a general millennial apathy toward credibility: Either way, in all their shambolic, orgiastic genre-smooshing, the Grateful Dead are now affirmed as a cultural touchstone in even the most jaded corners.

We can look forward to characteristics of the Dead’s ecosystem bubbling up in music, including the incautious enthusiasm of what was once known as “the jam-band scene.” Take Midday Veil’s new album, This Wilderness. Here the band refines the deep-space explorations they unleashed with their previous albums, carving out territory that borders the rubber-limbed, electro-inflected jam-bands of the late ’90s and early ’00s. Midday Veil was built on devotion to icy, motorik synth rock; This Wilderness warms up their sound, positing groove as both a form of transcendental ritual and a means to conventional, straight-ahead fun.

The first indication of MV’s loosening mores is the album’s first song, also its first single: “Babel” is the group’s strongest tune yet, not only because of its impeccable composition but because the members are bold enough to augment their numbers with some daring guest musicians. Keyboardist David Golightly rightly initiates the momentum, paving the way for lead singer Emily Pothast’s clear-sung vocals. Golightly’s bubbling synths are boosted by Bernie Worrell, veteran keyboard whiz and one of the architects of Parliament-Funkadelic. And at three-and-a-half minutes in, Skerik arrives, his saxophone aggressive and unafraid to push the band past its comfort zone. That Skerik has trafficked with jam-rock icons like Ween, Les Claypool, Benevento/Russo Duo and Galactic is no coincidence. Credit producer Randall Dunn for keeping so many mad musicians reeled in and tightly ordered.

With “Babel” setting the frame around the album’s landscape, the band goes about stretching toward the horizon. Set to a syncopated synth rhythm, “Empire Is No More” describes a kind of goddess-worshipping apocalypse, with Timm Mason and Jayson Kochan’s roaring guitars taking lead and Tor Dietrichson’s twinkling percussion keeping time. “I Am the War” is a neon-lit moonwalk into cosmic disco, Pothast’s vocals at their sultriest, slickened by strings from guest violist Eyvind Kang. The song nods toward Nile Rodgers and Giorgio Moroder. In between these upbeat numbers—explicitly aimed at the dancefloor or desert rave—are smoldering meditations like “Cages” and “The Water” where Dunn’s drone-metal influence casts a sinister shadow over the music. From celebratory to menacing, the emotional poles of the album are set wide.

Thus the evolution from those heady jam-band days: This music inspires more than a glowstick dance party. Midday Veil is searching for existential meaning as much as a good time. This Wilderness is one step closer to the answer.