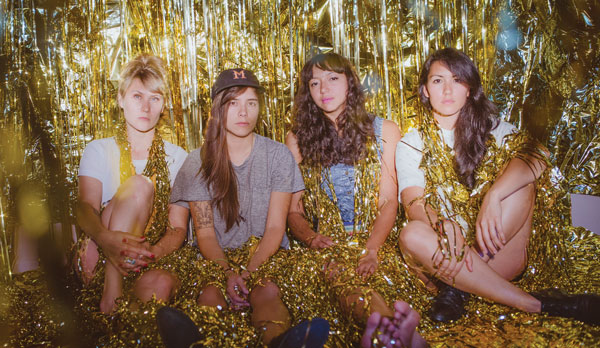 The path to La Luz’s second album is paved with a lot of living. Band living, to be specific—in the two short years between 2013’s It’s Alive and Weirdo Shrine, released this month, La Luz toured back and forth across the U.S., was involved in a serious tour-van accident, replaced a member, toured Europe with underground garage-rock god Ty Segall and then toured the U.S. some more. Last year La Luz bassist Lena Simon was recruited into Thunderpussy; last month bandleader Shana Cleveland released a solo record. As you read this the band is in the midst of yet another three-month tour of the U.S. and Europe.

All this explains La Luz’s growing confidence as they release their best work yet. The quartet packs a lot of living into Weirdo Shrine’s 30 minutes, but even still, the album plays out with an unhurried urgency, never feeling overeager or overly dense. Some credit goes to Segall, who nurtured the ladies’ live show on tour (they’re crowd-surfing virgins no more) and produced the new album. But the bulk goes to Cleveland and her bandmates, who put in the effort—given their work ethic, 10,000 hours seems within reason—to cultivate a sound both energized and calm.

Since their earliest days La Luz has been deemed a surf band, and their sound does start there on the beach: Cleveland’s guitar echoes with Dick Dale-ish Fender Strat twang, Alice Sandahl’s keys swell with haunting, Hammond organ-like thickness and the girls engage in plenty of Ronettes-style wah-oohs and -ahhs. But “surf rock” is an incomplete descriptor for La Luz’s self-aware, noir-pop boogie. Or if we’re gonna agree to call it surf rock, then we agree also that La Luz updates and expands the genre’s aesthetic range.

This is a band transmitting the type of impassioned ambivalence that clearly signifies cool. It radiates outward from Weirdo Shrine and draws you in, from why-try song titles like “Sleep til They Die,” “I Can’t Speak” and “Don’t Wanna Be Anywhere” and from within the songs themselves. On the latter, Marian Li Pino’s rim-shot percussion tiptoes around Cleveland’s nimble fingerpicking as Cleveland drawls out the titular lyrics, expressing a sincere longing for the existentially impossible.

Li Pino’s drumming stands out throughout the album, in fact, swinging from an elemental tom-drum pulse to dizzying cymbal-and-snare sizzle. Check out “I Wanna Be Alone (With You)” for another phenomenal example; that song also contains the album’s wildest guitar solo, with Cleveland clocking in 30 ferocious seconds of squall.

Cool and longing coexist on Weirdo Shrine, a collision of detachment and suffering swathed in heavenly reverb and a high-stepping beat. Life’s more than a beach, and now more than ever, La Luz knows it.

La Luz celebrates the release of Weirdo Shrine at the Showbox on Fri. Aug. 7.