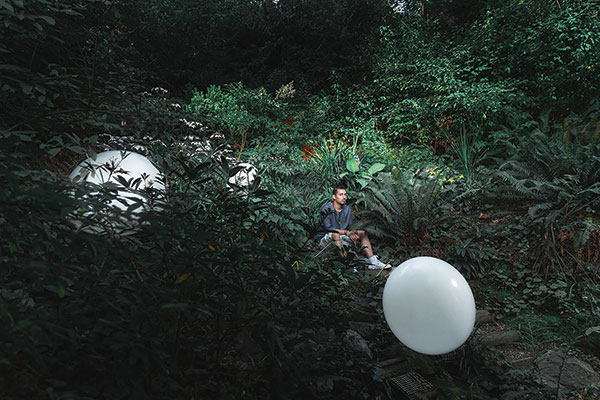 By the time you listen to Leavings, Tay Sean will be long gone. Not physically—though the multitalented Taylor Brown is as likely to be making music in Los Angeles or Sitka, Alaska, as Rainier Beach—but creatively. Throughout his career, in the early ’10s as an MC with the hip-hop crew Kingdom Crumbs and more recently as a keyboard player and producer for the most progressive hip-hop and R&B musicians in Seattle, Tay Sean has demonstrated a restless artistic sensibility. He looks always ahead for new ways to create, connect and evolve. Leavings is the skin shed, the ashes scattered, the marks made in sand. And Tay Sean—who knows where he’s headed next?

The album title echoes a powerful statement once made by Maikoiyo Alley-Barnes, one of Tay Sean’s comrades in the Black Constellation collective: “The art is actually the leavings, man.” The music is meaningful, yes, and in the case of Tay Sean’s solo debut, deeply and deliciously funky. But not as significant as the lineage that produced it.

This embrace of the ephemeral—how’s that for a contradiction of terms?—only emphasizes the meticulous craft Tay Sean put into Leavings. The album sounds like a work of hermetic rigor, each song a projection of some invisible landscape, as vivid and surreal as the one depicted on the cover. Tay Sean’s elegant, singsong flow descends directly from Seattle’s resident hip-hop mystic, Ishmael Butler, and Tay Sean pairs it with wonky rhythms, unpredictable arrangements and inscrutable accents in a form of mutant soul music that’s as appealing as it is strange. On the album’s only collaboration, “Um Tryin,” Tay Sean distorts JusMoni’s vocals into digital chipmunk chirps, percussive and alien, until the R&B singer emerges in full at the song’s close. Every element is an instrument if you play it right.

Right from the start Tay Sean is intent on evolution: Album opener “Australopithecus” is named after the prehistoric hominid that eventually became homo sapiens. Tay Sean riffs lyrically (“Australopithecus/Animal ignorance/Natural mystic shit/Natural impetus/Astral influence/Gradual increments/Magical instruments”) over a bubbling, swinging beat—a properly thrilling introduction to the freshness to follow. Throughout the record, Tay Sean backs himself up with samples of his own voice and accompanies his own vocals with his own keys and drum programming. He concludes “Higher Vibrations”—the highlight of the album in its frantic, ecstatic crescendo—with a ripping guitar solo.

Psychedelic soul has been around since the Temptations’ late-’60s masterpieces, but psychedelic hip-hop is a rare and enchanting niche, purveyed by a slim cadre of contemporary visionaries like Flying Lotus and Edan. By the final third of the album, Tay Sean has merged the two, arriving at a similar sense of moody, shifting atmosphere as heard on Frank Ocean’s latest albums. In its 33 minutes, Leavings evokes an extraordinary ambiance and sustains it just long enough to make an enduring mark.