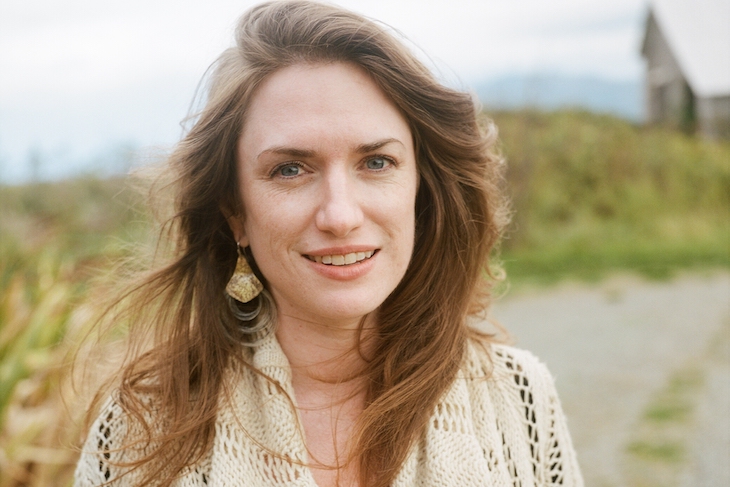 The summer that the scariest thing was the Australia-sized hole in the ozone layer, I caught a sunburn so bad two blisters rose from my back and burst when I leaned into a chair. Mother mutilated her aloe vera plant by cutting off its leaves and dragging its ooze over my alarmed parts. When I peeled, I peeled palm-sized chunks from my thighs and arms. My skin grew back but the aloe didn’t. Even in winter, its stubs reminded us of burn.

After dark we take a flashlight and a wad of paper towels to the garden and pick earwigs off the leaves of our honeysuckle. I hold the flashlight and you hold the paper towels, which are quilted and bleached and bought in bulk. I aim the light at the vine and we both look for them—thin ovals the length of my fingernail when it’s cut short, brownish-blackish-reddish and wingless, with mouths that turn topiary into lace. They arrive in July with the heat. They like to eat tender things, like we do. They like flowers, especially the petals, just like we do. They feed at night.

A couple years ago, nine samples of adult mosquitos tested positive for the West Nile Virus about two hours west of where we live now. The flier at Red Circle Food Center says

Applications will continue through August, all of which are weather dependent.

“How are people supposed to know when they’re spraying?” you say.

I ask the internet this question. “Our message is that we’re actively spraying,” says a county news bulletin. “People can still go outside. They just need to protect themselves.”

Aloes and other succulents can be effective fire barriers, smoking and charring but not bursting into flame, possibly saving the house they encircle. Aloe ciliaris, or firewall aloe, has been planted for this purpose.

When succulents turn colors—often a deep red—it’s a sign of too much sun and not enough water. Putting them under stress can be an aesthetic choice. Aren’t they beautiful, spiked in the corner of the yard where nothing else thrived, blazing with their survival?

We both inspect the vines, but it’s your job to pick the earwigs off and smash them. Sometimes that’s my job but today it is yours. The smashing requires a tough pinch through a layer of paper towel, just enough to keep your hands clean so you can continue the extermination with minimal disgust. Earwigs’ exoskeletons are strong; when you muffle your fist in a wad of paper to protect yourself from feeling what you’re doing, they don’t die. When it’s my turn, I use my feet.

At the Red Circle Food Center we buy Ruffles and Cheez-Its and Kit Kats and soda water. We’re passing through, harvesting our cellophane food, in-and-out before the mosquito hour arrives.

Plant tissues, like human tissues, can burn in the sun. The water in their cells actually cooks, leaving withered brown patches that can rot. This damage is permanent.

Hunting earwigs by hand is a crazy way to garden. There’s little to win in this battle but the feeling of having fought.

On summer solstice I place a potted aloe next to the honeysuckle and burn it so badly I have to cut off most of its leaves. For fun, I drag the aloe’s cut edges over my forearms. The sap is cool at first. Then a dried, stretched sensation creeps over my skin. The burn starts when the red appears—strokes of irritation sweep down my arms.

This aloe is not an aloe. It is a century plant and its sap is toxic.

It is summer and plants are having sex all over our cars and houses and inside our sinuses. The honeysuckle climbs, the earwigs feast, I snort allergy medicine, my first sunburn surprises me. A child points to a mole on my leg and asks, “What is that? Is it open?”

He is too young for freckles, but we can see them starting. Just give him another season.