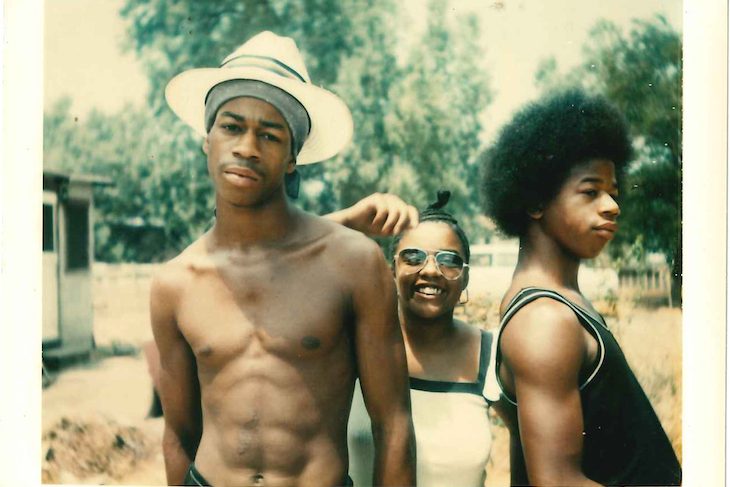 "I just love the colors," Jackson says. "I’m also drawn to the faces—it's compelling portraiture. I also find it interesting in how it’s dealing with the family—and that’s what a lot of snapshots are about.”

Robert E. Jackson is one of those collectors who just can’t help it. Even as he tries to shrink his collection of more than 13,000 snapshot photos by selling of some of them, he buys new ones every day.

Just this morning, he says, he bought two on eBay: an old black-and-white photo of a metal toy construction set and a lighthearted color snap of a woman awkwardly holding up a thong during a party. Both are anonymous and devoid of context.

“I’m interested in snapshots because of the beauty of the image,” Jackson says. “I don’t care about the cultural touchstones it relates to. I buy because I like the material. I’m kind of addicted to the imagery.”

Jackson, who’s based in Seattle, has been a collector of popular, mostly anonymous 19th-, 20th-, and more recently, early 21st-century snapshot photography for more than 20 years. Parts of his collection have been exhibited in the National Gallery of Art in DC, the Amon Carter Museum in Fort Worth, Texas, and in galleries in San Francisco, Los Angeles and New York City.

Now, for the first time, his collection will be shown in a museum in the Northwest with Polaroids: Personal, Private, Painterly, opening Oct. 12 at Bellevue Arts Museum.

“The title encompasses what I think the Polaroid is about,” Jackson says. “It’s a document of one’s personal life. It’s private, because you didn’t have to take it to a shop to be printed, so you see more photos of things you wouldn’t show to your grandmother. Lastly it is painterly, in that people create imagery on the Polaroid itself, by manipulating the chemicals.”

After studying art history, Jackson went on to get an MBA and later worked for an insurance company, a bank and an asset management company. Not a career, he points out. Just corporate jobs.

Below, Jackson talks about a few photos from the BAM show as well as some from his personal collection. 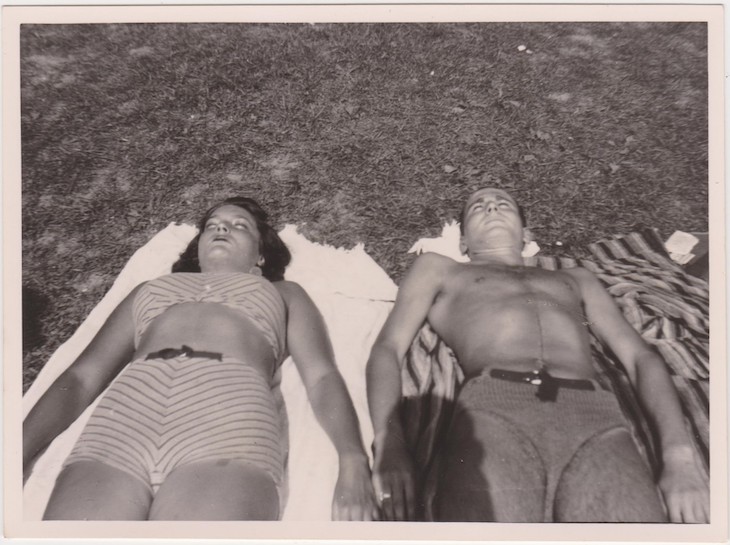 “This photo deals with what snapshots do best: intimacy. Fine-art photographers generally wouldn’t be in situations capturing strangers sleeping. Most of the time, it’s a friend capturing this private moment. This is a joke—it’s personal. That’s why I collect sleeping snapshots, a subset in my snapshot collection.” (This image is from Jackson’s personal collection and is not on view at BAM.) 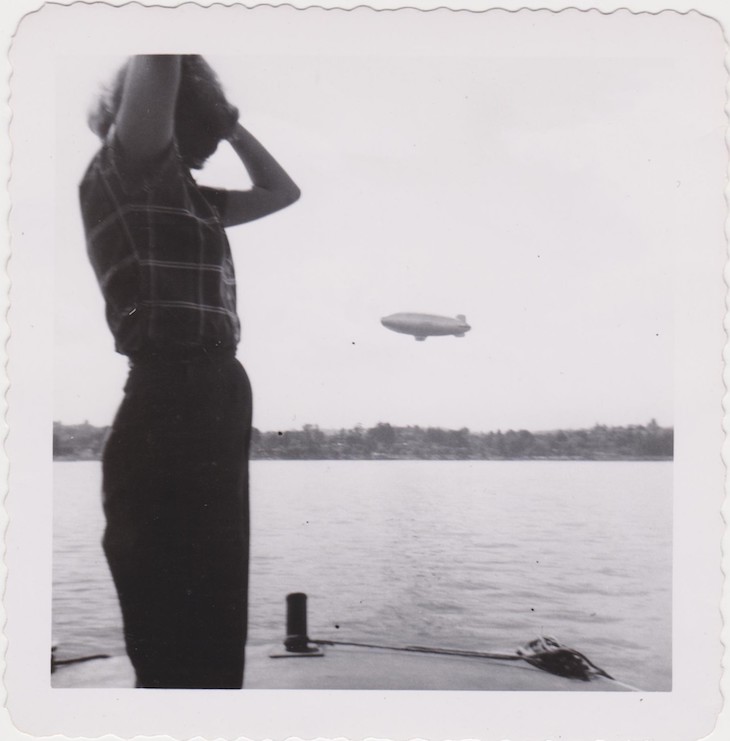 “I think this photo is from the ’50s, as it has a deckle edge. Part of the appeal of this square format for the snapshooters of that age, I maintain, was that it emulated TV screens, which were then square. It’s a hauntingly unusual photo. It’s so strange: She’s nearly in silhouette, and then there’s this odd blimp you wouldn’t expect there at all—magical. As a collector, you’re always hunting for that next magic, one of a kind image. That’s the addiction.” (This image is from Jackson’s personal collection and is not on view at BAM.) 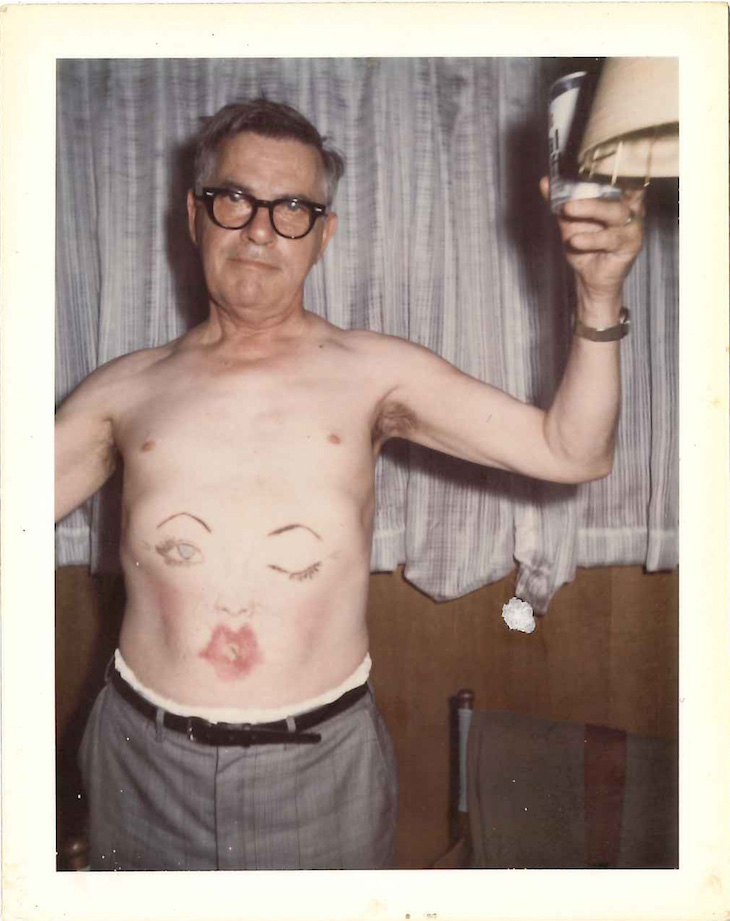 “This shot falls in the ‘Private’ category of the BAM show. I like party photos, and specifically images where people’s bodies have been drawn on. This guy’s face, he’s had a little to drink. Maybe he’s a banker or something, but who knows what he’s like in real life?” (This image is on view at BAM.) 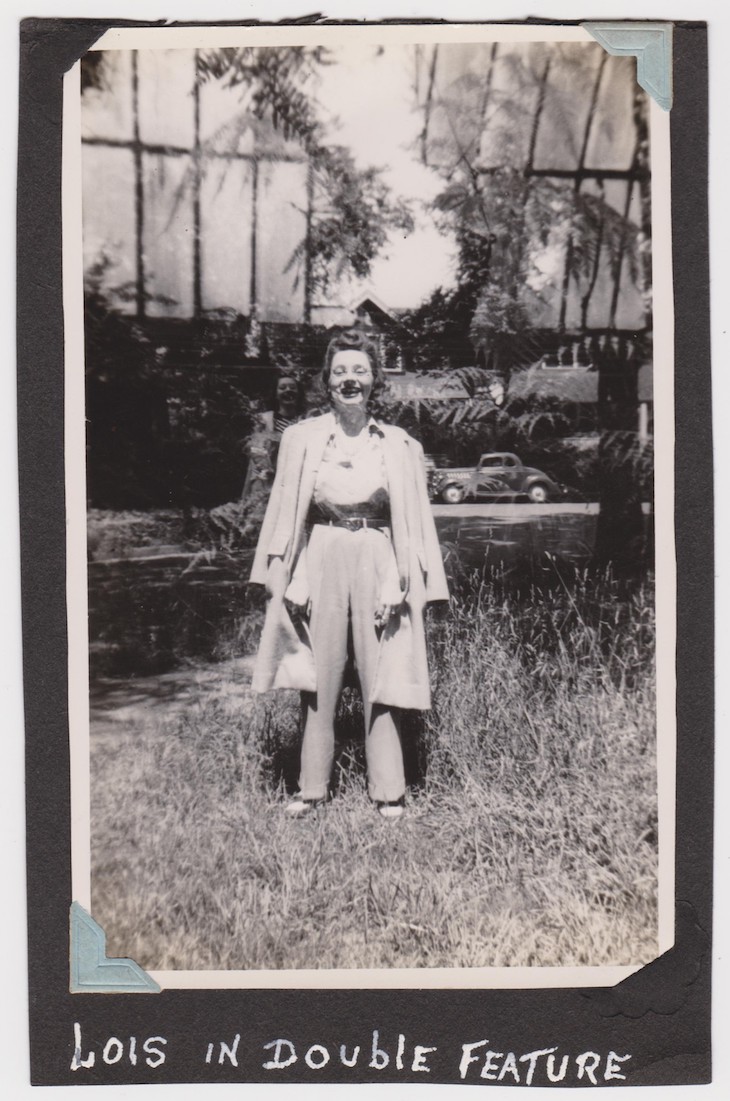 “Double-exposure shots are among the most sophisticated types of snapshot photography. They’re not about what the photographer saw, but what the camera saw. This was an accident where the shutter basically got stuck and took two pictures at once. Interesting here is that they reference movies and call it ‘Double Feature.’” (This image is from Jackson’s personal collection and is not on view at BAM.) 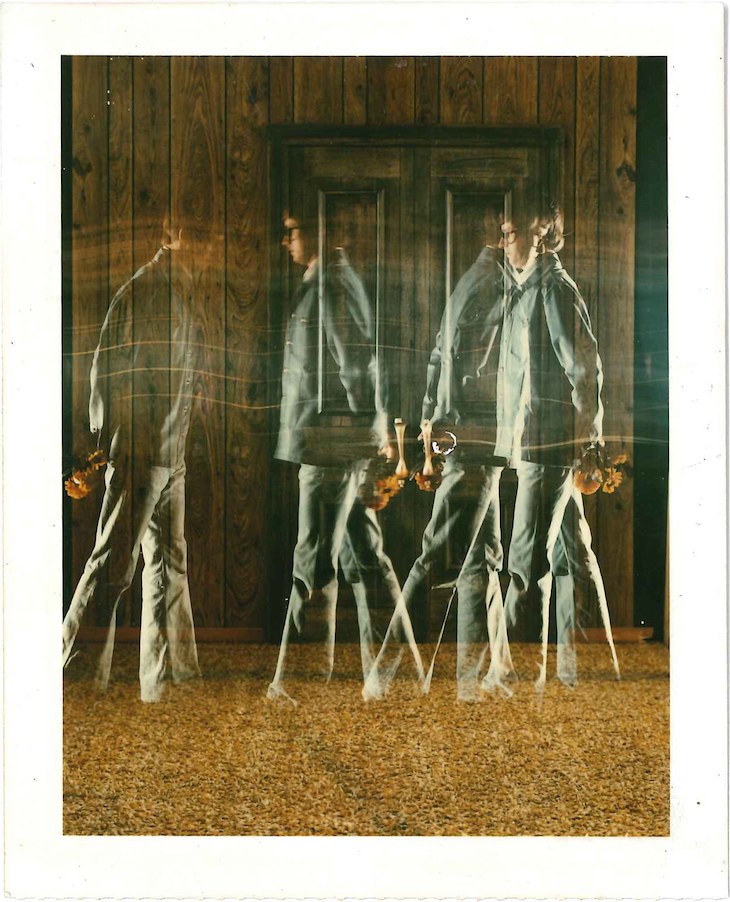 “This is very sophisticated work by an amateur or maybe professional photographer. This is part of a series of which we’ll have more images in the show. I was drawn to it because of the movement and the trickery—it’s almost ghostly.” (On view at BAM.) 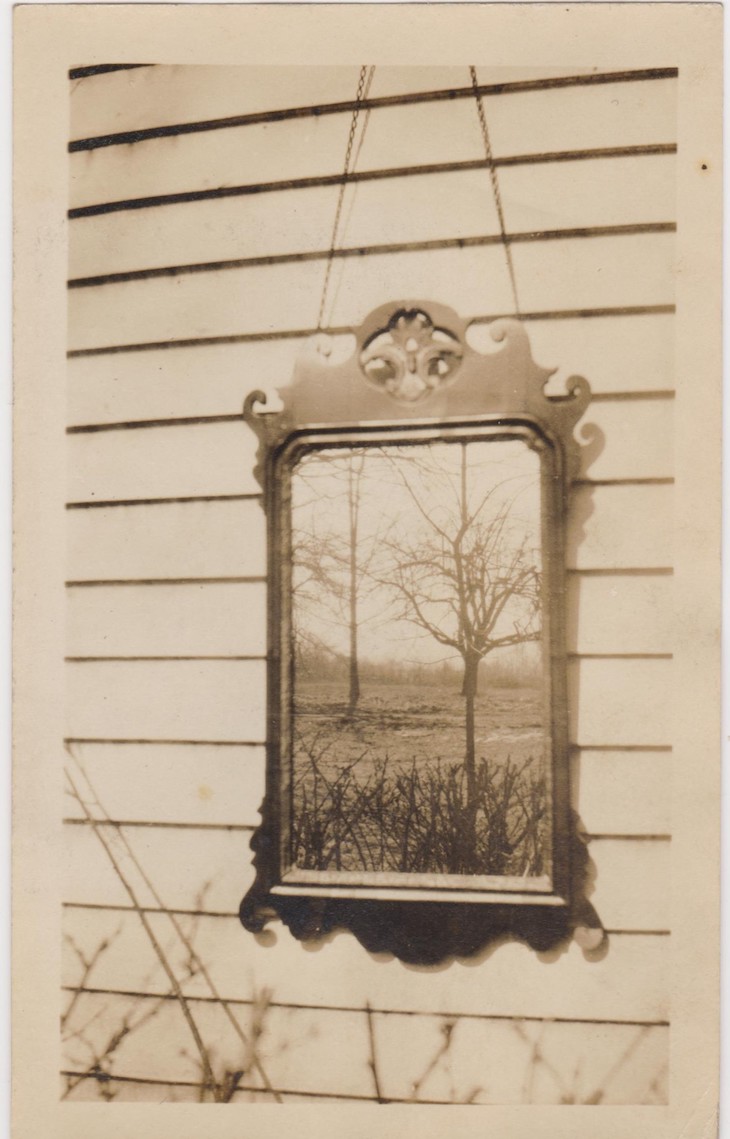 “I’m guessing this must be from the 1930s. It’s a very enigmatic image. I like it because of the simplicity. There’s no people in it; it’s all about this object. Somebody decided to hang a mirror outside of their house, creating two different realities at once.” (From Jackson’s personal collection.) 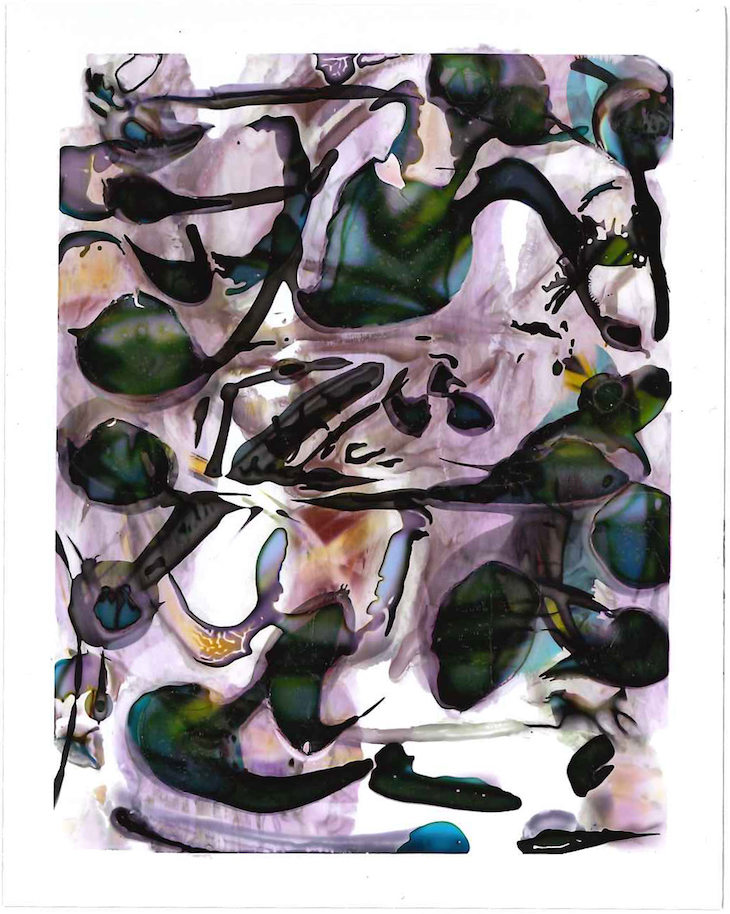 “The Polaroids by Erik Simkins are probably the only non-anonymous photos in the show. I’ve been collecting his work [Simkins creates “paintings” on the not-yet-dry film emulsion] for a while; I like that it has an abstract-expressionism quality to it.” (On view at BAM.)

Polaroids: Personal, Private, Painterly runs from Friday, Oct. 12, 2018, through March 24, 2019. Robert E. Jackson and BAM director/curator Benedict Heywood will be in conversation at BAM on Oct. 19.