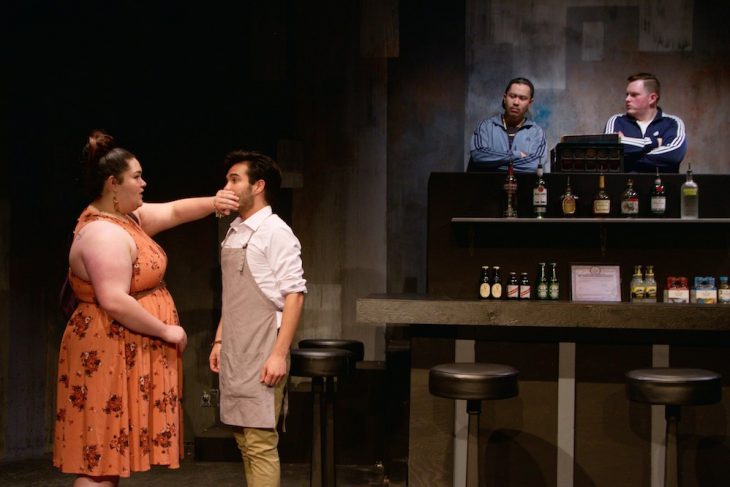 For a play about the reverberating effects of grief on a family, Kristoffer Diaz’s Welcome to Arroyo’s presents a remarkably utopian vision of community cooperation.

Siblings Alejandro (Tony Magaña Jr.) and Molly (Ashley Salazar) lost their mother a month ago, and they’re processing in different ways. He’s converted her Lower East Side bodega into a lounge—but the clientele hasn’t stuck around. She’s become even more defiant with her graffiti, tagging a police station and then assaulting the cop who confronts her about it. Twice.

In a more traditional play, these events would precipitate crescendos of crisis, but Diaz’s drama ebbs, scenes melting one into the next, peppered with direct-address monologues and propelled by hip-hop beats.

Theater Schmeater’s likable but halting production, directed by Jay O’Leary, doesn’t achieve the rhythm Diaz seeks. Scenes awkwardly abut more often than they flow together, and some performances have a practiced quality that interferes with the easygoing poetry of Diaz’s dialogue.

That’s not the case with Michael Cercado and Richard Sean Glen, who charmingly play Nel and Trip, the pair of DJs/chorus members who work at Alejandro’s bar and present the events of the play, commenting on the action and pausing, rewinding and remixing where necessary. This isn’t the freshest conceit—actors making that backwards-tape-recorder noise and moving in reverse will always be a better idea on paper than in practice—but the DJs’ gently sardonic asides and guiding hands give the play some welcome structure, and Cercado and Glen play off each other nicely.

Despite its free-flowing vibe, there are distinct A and B plots here. In the main thread, college student Lelly (Anasofia Gallegos) details her research into the history of hip-hop and her discovery of a little-known Puerto Rican DJ named Reina Rey who might have been instrumental in the genre’s creation. Her research has led her to Alejandro’s bar, where there could be a connection between Rey and his late mom. He’s intrigued, but baffled by her nervous indecision, which frequently prompts her to flee the bar in the middle of conversations.

In the B plot, Molly’s tagging attracts the attention of Officer Derek (Naa Akua), a rookie cop who admires her talent and looks—and is willing to overlook a lot because of it. Derek’s lax approach to law enforcement is where the play most flagrantly strains credulity, but it’s worth it for Akua’s sensitive performance, which turns a tossed-off gag about sharing a name with a more famous Derek into a poignant monologue about thwarted identity.

Everyone in Diaz’s play is trying to sort out who they are. Molly is obsessed with thinking of herself as an artist, denigrating everyone who isn’t as a “servant” to elevate her position. Alejandro wants to be the community linchpin that his mom was, but he doesn’t want to do it in the same way. Lelly is haunted by her past rejection of her Puerto Rican heritage and fumbles toward making amends by digging deep into her history.

Diaz uses monologues to isolate these desires as solo pursuits, but it’s only when the characters are all on stage together that the possibility of emotional fulfillment emerges. In these moments Welcome to Arroyo’s, which sometimes feels like a loosely strung-together wisp of a play, finally clicks.

Welcome to Arroyo’s runs through June 2 at Theater Schmeater.