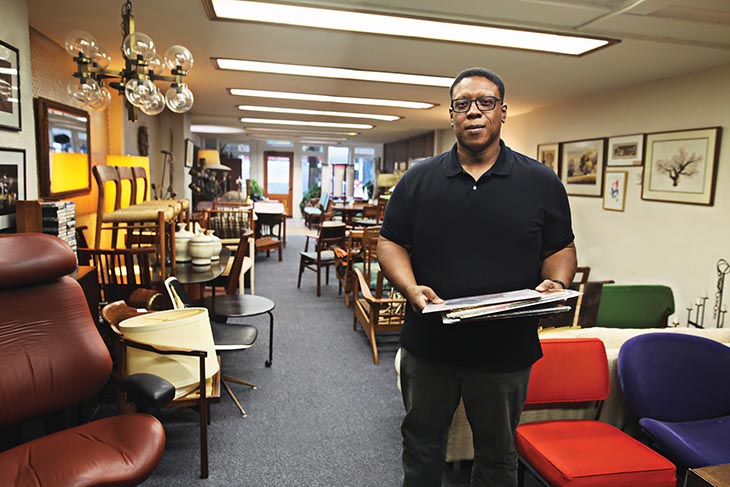 Jacob Willard Home owner Karl Hackett sits on the board of the Hillman City Business Association. “People are coming [to the store] from other parts of the city, but there’s huge amounts of support from the neighbors,” he says. “People are really engaged.”

In the early 1930s, during the height of the Great Depression, young Theodore Baumritter and his brother-in-law traveled from New York to Vermont. They were so taken by the state’s crafty, DIY history that they relocated their housewares business there, taking as its namesake Ethan Allen, the pioneer farmer, businessman and rabble-rouser who led the ragtag Green Mountain Boys in their successful raid on Fort Ticonderoga during the Revolutionary War and later founded the state of Vermont.

I didn’t know any of that stuff back in January 2014. I only knew that I needed a chair for my apartment and liked the one I found advertised on Craigslist.

When I arrived at the seller’s house in Hillman City, Karl, as he’d introduced himself over email, led me through a dense maze of vintage bikes, furniture and artwork to my new treasure, singled out from the stockpile. Then he filled me in on its backstory.

This was a Baumritter chair, he said, of a type designed in the 1950s by the man himself to sell at his booming chain of Ethan Allen stores. As the first store to sell furniture in home-like, in-situ settings, Ethan Allen became the most popular furniture brand in America. In the ’60s these chairs were as ubiquitous in American households as Frigidaires and Hoovers; today they’re coveted by midcentury-modern fetishists. A sleek, low-slung number made of honey-colored maple and fitted with refurbished blue-and-white-checked, cotton-cloth cushions, it was one of those timeless, overlooked objects that American manufacturers cranked out in the decades after WWII with an eye toward understated style, functionality and durability.

It was perfect for my living room. Included with my classic piece of American design was a lesson in American history.

Three and a half years later, I’m browsing the vintage wares at Karl Hackett’s vintage furniture shop, Jacob Willard Home, not a half-mile from the house that was once packed corner-to-corner with inventory. Until 2014, Hackett sold his curated hoard of furniture online and in quarterly yard sales. Today his Hillman City store is 1,000 square feet, big enough to accommodate a constantly rotating inventory but small enough that Hackett knows the provenance of almost every item.

“I like hearing that you still have it, and that it’s an integral part of your space,” he says, recalling my Baumritter. “I’m a little bit nerdy on the furniture front, so every time a piece finds a new home, I feel like I’ve closed a circle.”

No surprise there are a few Baumritters here, as well as what Hackett describes as “the Danish version,” made in the same era and boasting similarly sleek lines. Vintage lighting fixtures and chandeliers hang overhead. An enormous, undulating, wooden drafting table, hand-built by a cabinet maker in Spokane, sits prominently in the middle of the store, a one-of-a-kind piece of “functional art” that Hackett recently sold to a school principal. There are snazzy space-age bachelor couches. A leather “wave chaise” chair. An array of weird, alluring paintings and wall hangings. Stacks of ’70s hi-fi equipment and speaker towers.

Two months ago, Hackett finally emptied the storage room at the back of the shop and filled it with vintage vinyl—lots of hard-to-find jazz, plus rare rock and soul imports and novelties, sourced by two seasoned buyers. He calls it the Sound Room.

“I’m a collector,” Hackett says. “I’ve been collecting as far as I can remember, whether it was stamps or marbles or bicycles… it’s the one thing I always remember doing.” The more items he acquired, he says, the more history he retained, and now he’s the walking index to the design encyclopedia that is Jacob Willard Home.

He points out his latest obsessions. The first is a set of Finn Juhl Model 138 chairs, shark-like in their poised, aggressive angles. They’re currently awaiting heather-grey felted-wool cushions from Hackett’s go-to upholsterer, an Everett-based journeyman.

The second is a battered sofa smothered in faded green cloth. It was designed by Ib Kogod Larsen for Carlo Garn, a Danish furniture-maker who turned to wine storage as a second career. This, too, is awaiting Hackett’s hand to bring it back to life. Hackett knows of only one other similar piece in existence. Among all the here-and-now sexiness in his store, Hackett is most turned on by the diamonds in the rough.