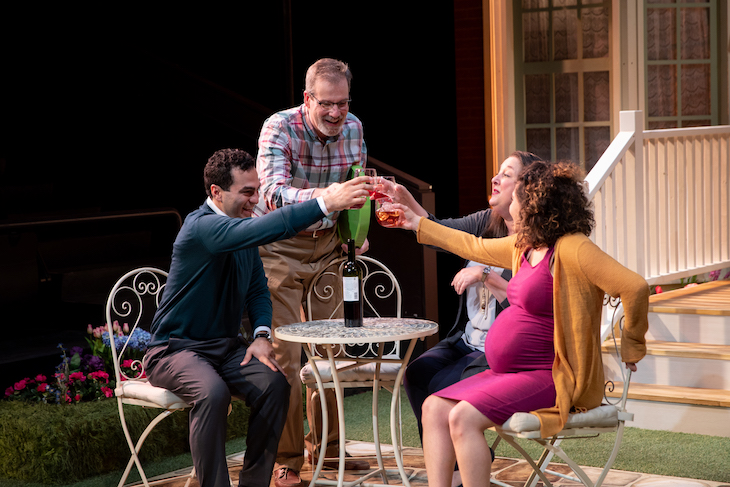 Once upon a time, in an upscale Washington D.C. neighborhood, two couples beamed at each other over a low chain-link fence. In one backyard: Tania and Pablo Del Valle, a Ph.D. candidate and lawyer, respectively, newcomers to the neighborhood. In the other: Virginia and Frank Butley, longtime neighborhood residents and employees in the federal complex—she a defense contractor, he a consultant of a largely unspecified denomination.

The Del Valle’s long-neglected yard is a scrubby affair, but Tania is overjoyed with the possibility of refreshing it with indigenous flora, a native garden to support the local bee and bird population. The Butley’s yard is a model of brightly colored order, Frank’s love of English formal gardens transplanted with painstaking, pesticided care into the Mid-Atlantic landscape.

In Karen Zacarías’ Native Gardens, now running at Jones Playhouse produced by Intiman Theatre with crisp direction by Arlene Martínez-Vázquez, things start off friendly enough. When Pablo impulsively offers to host his whole law firm for a barbecue, he and Tania, who is very pregnant, decide to overhaul the yard at warp speed, and that means a new fence. They approach with caution, but the Butleys are delighted! The fence has been a blight on Frank’s garden since the former owner installed it, and wouldn’t you know it, the Potomac Horticultural Society Best Garden Awards are coming right up!

Then Pablo pulls out the property plans filed with the city and realizes the Del Valle’s yard actually extends two feet into what the Butleys have long considered their property. In a neighborhood with a high square-footage price, that matters. Thus begins an escalating turf war, a low-stakes, high-emotion battle of wills and a metaphor for many a topical issue, walls between white and Latinx people not least among them.

From the opening scene, written as direct-address to the audience, Zacarias lacquers this story with sitcom-y artifice, and Martínez-Vázquez embraces the aesthetic—you almost wish for a laugh track. Frank spritzes his beloved flowers in a kind of gardening ballet, delicately tippy-toeing among his plants as classical music cranks so loud it feels more film soundtrack than stage interlude (stellar sound design by Matt Starritt). There’s a running stress-ball gag that would be right at home on Must-See TV.

All these characters are affable people, pleasant and tailor-made to complicate their own archetype. Pablo (Phillip Ray Guevara) grapples with being the only minority in his firm, but he was raised chauffeur-level wealthy in Chile. Tania (Sophie Franco) had a rougher childhood in New Mexico but she’s brilliant, accomplished and uncompromising. Virginia (Julie Briskman) is entitled and wealthy and talks candidly about her working-class Buffalo childhood and her hard years in a male-dominated field. Frank (Jim Gall) is a quiet fellow, dedicated to his gardening and generally uncombative, except when it comes to his plants.

Tania sums it up many of the play’s themes nicely, if overtly, when describing her studies as an anthropologist. “I’m interested in origins and when we claim them and when we stop. The power of language and place. Native vs. foreign. Especially in a country as complicated as the U.S.”

The Butleys are upper-class white people who “haven’t done anything wrong” and so feel no responsibility or compunction about doing exactly what they want (though their realization that claiming squatter’s rights might be their best legal bet is one of the show’s funniest moments). Frank and Virginia can claim their heritage only when they want to; Pablo and Tania don’t have that luxury. None of them are Native, though some are born in the U.S. All are accomplished and wealthy. Who owes what to whom? Complex questions, but for anyone who reads news or talks politics with any regularity, none of this food for thought is new.

Adding to that is the theatergoer’s ego, masterfully stroked throughout the play. When Pablo hisses “they’re Republicans,” Tania shoots back “They’re still people,” to huge laughter. Virginia blurts out, “We love Mexico!” at the end of a compounding list of incorrect assumptions about Tania and Pablo’s heritage, and we get to laugh, knowing we would never say anything that idiotic. It doesn’t help that, in that sitcom way, the actors often seem to comment on their lines as they say them, playing for the laugh rather than the truth. If these characters don’t behave like real people we don’t have to see ourselves in them which, in a play that touches lightly on so many -isms, is a marvelous get-out-of-jail-free card for an audience.

As a play, Native Gardens does what it does well and this production serves it well: It’s funny, cleanly directed and sharply acted, though Gall brings particular deadpan nuance to the milquetoast Frank. The design—scenic designer Lex Marcos, costume designer Frances Kenny and lighting designer Robert J. Aguilar round out that team—is exceptional. But after 30 minutes, I got bored with the gimmicky setup. Can you imagine watching a 90-minute episode of Friends, one premise stretched and beaten to death before wrapping up the way we always knew it would? Because this play tells you exactly what it’s about, there’s no substratum and little surprise.