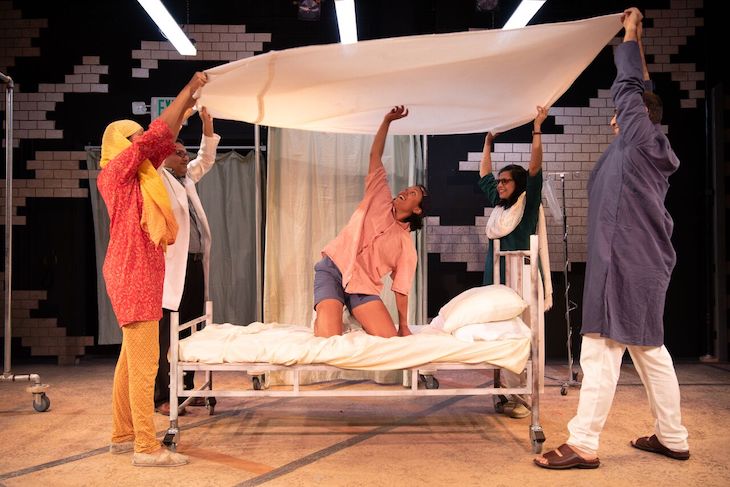 Nabilah Ahmed, center, with the cast of 'Amal.' Photo by Pankaj Luthra

Amal, like most seven-year-olds, has quite the imagination. He may be cooped up in a hospital bed in Mumbai, but adventure lurks around every corner. The squirrel outside is a secret messenger. The food-cart guy is a budding Bollywood star. The world is whatever Amal wants it to be, and Lindsay Joelle’s lyrical new play shapeshifts to accommodate his fancy.

Forward Flux and Pratidhwani’s production of A Small History of Amal, Age 7 feels like a children’s book come to life. Then it delves into a darker chapter: the 2006 Mumbai train bombings, where a series of seven attacks killed more than 200 people. The tonal shifts are handled smoothly in this staging directed by Samip Raval, but using a real-life national tragedy to tell a fictional personal one is always a dicey proposition, and the play’s ancillary treatment of the bombings approaches flippancy.

Still, this is a story laced with heartache. Amal (Nabilah Ahmed) has lost his both his parents in an accident, and he’s been taken in by his train-conductor uncle (Gurvinder Pal Singh) who knows next to nothing about raising a child. Amal is thrilled to go from a small village to the bustle of Mumbai, but a sudden illness sends him to the hospital, thwarting his visions of railway adventure.

Stuck in a sick bed, he endures boring treatment from a no-nonsense doctor (Abhijeet Rane) and a sympathetic nurse (Meenakshi Rishi), helps a sullen employee (Jay Athalye) indulge his dreams of stardom and gets his first crush, on a girl who needs regular blood transfusions (Varsha Raghavan). The heavily choreographed ensemble (movement direction by Wesley Frugé) follows Amal’s whims, transforming people into otherworldly beings or providing the sound effects for a monsoon-season downpour. If you’re looking for cutesy-whimsy, you’ve come to the right place.

Adults playing young children is a conceit with a low success rate, but Ahmed capably triggers suspension of disbelief with her performance, which possesses the curiosity and consternation of a kid forced into a new but undesirable situation. Other performances aren’t quite fluid enough to match the show’s short attention span.

At 75 minutes without an intermission, the meandering in Amal feels acceptable, but the introduction of abruptly higher stakes in its final section feels like a hastily troweled-on addition. Reality intruding on the light-touch fable doesn’t make the whole seem more substantial; it makes the first 90 percent feel frivolous. When it’s operating as a fanciful journey inside the mind of a seven-year-old, Amal is a likable confection. Too bad it tries to do more.

A Small History of Amal, Age 7 runs through Oct. 6 at West of Lenin