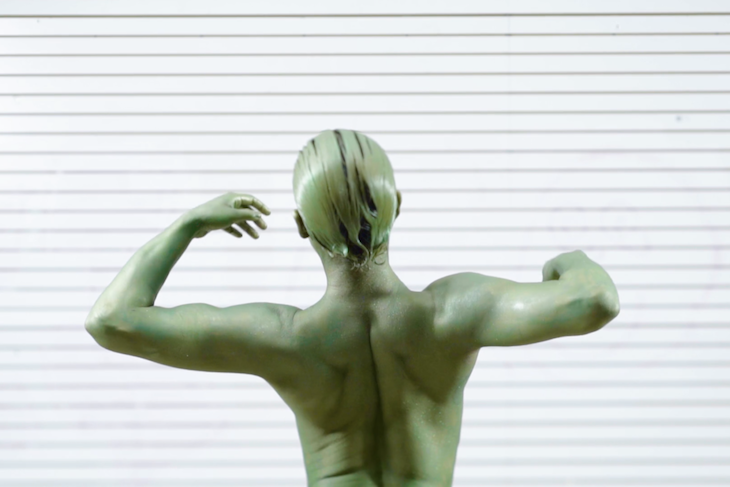 A still from Korakrit Arunanondchai's video installation 'With history in a room filled with people with funny names 4,' which shows at Specialist

On the southern shore of San Juan Island, overlooking the Strait of Juan de Fuca, are the vestiges of a 19th century English military outpost. Once a vital stronghold along a coveted trade route, it’s now a quiet tourist destination for whale watchers and history buffs. Further down the island similar husks remain from an American camp. Back when these spots were active, both the United States and England laid claim to the island, which was bisected by a tenuous, ever-shifting border.

In 1859 an American farmer shot and killed a rogue British pig and war nearly broke out. The nations resolved the conflict without bloodshed and San Juan Island was eventually appointed to the United States. Almost 160 years later, some 20 artworks are being installed across the island this summer in a show titled Becoming American.

“History is a funny, difficult thing,” says Fionn Meade, a curator based in New York who was born and raised on Vashon Island. For him, the history of San Juan Island reverberates with the ongoing struggle to confront the idea of American identity, particularly in light of today’s politics.

Meade, along with co-curator Philippe Hyojung Kim, is seated at a cafe looking out on bustling Occidental Square. At one end of the public space people are shooting hoops and at the other a protest is underway. “James Baldwin spoke to this quality of becoming American,” Meade says. “Being American is not a given, but is a constantly revised question. It’s an aspirational idea—American identity, American rights, something being constantly revised and constantly contested.”

Meade—who over the past decade served as curator at Henry Art Gallery in Seattle and SculptureCenter in New York, and most recently as artistic director at the Walker Art Center in Minneapolis—drew inspiration for the exhibit from Baldwin’s writing. Becoming American is the first show in a series produced by Cefalonia (named after the birthplace of explorer Juan de Fuca), a long-term curatorial project he designed to bring site-specific contemporary art to the Northwest. The Cefalonia curatorial team includes Kim, Seattle artists/curators Cat Clifford, Aaron Bush, Hannah Cwiek and New York-based curator Mary Coyne.

This inaugural exhibit, opening the same weekend as Seattle Art Fair, includes work by art stars like Adrian Piper and Jasper Johns. It also includes artists who have called the Northwest home for a time, such as the now LA-based composer Eyvind Kang and Rodrigo Valenzuela, who’s showcasing imagery of gas masks cobbled together from found objects. Seattle artists Barbara Earl Thomas, Marie Watt and Gretchen Bennett will dot the island with ephemeral works and Jeffry Mitchell is peopling a centuries-old hospital with delicate, disembodied limbs rendered in ceramic. Park docents will give guided tours during the exhibit’s two-month run.

“Personally, I am becoming American,” says Kim, Specialist’s cofounder and curator, who recently underwent the process of immigration interviews himself. “I’m in the process of becoming, so this exhibit is relevant to the bones: It’s a visceral thing. Even though I’m in a somewhat secure position, I’m not sure when and how I get to talk about my legitimacy or my sense of being American. As artists, we’re at least able to confront those things through metaphors.”

Says Meade, “People say a metaphor is just a metaphor, but people live and die for metaphors. It’s part of freedom of expression.”

Meade and Kim return to the idea of confrontation and contesting identity throughout our conversation, but within the exhibition they apply smart, funny, meditative twists on those themes.

“I think of this as a sort of pilgrimage to these sites, places we otherwise don’t ever go to,” Kim says. “Or if we do, we go as tourists. Seeing how other people operate within this sense of identity, or with history, it’s very powerful to witness.”