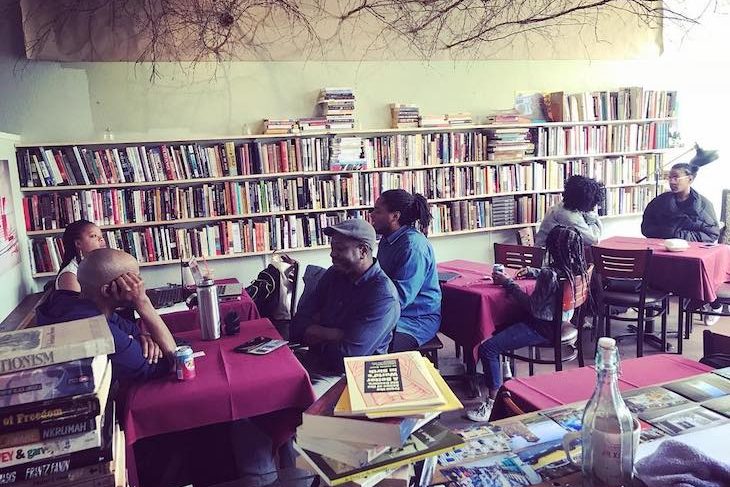 Edwin Lindo is searching his shelves for the book that defines his bookstore’s mission. He pulls a slim volume from the stacks: a worn copy of a Fidel Castro speech called Una Revolucion Solo Puede Ser Hija de la Cultura y las Ideas. “When Fidel said that a revolution can’t happen without culture and ideas, I felt that,” Lindo says.

We’re sitting in the physical embodiment of that maxim—Lindo’s brainchild, a bookstore called Estelita’s Library, named after his infant daughter. Occupying the adjunct location of the Station café on Beacon Hill, it’s a space, Lindo hopes, where writers, artists and intellectuals interested in social transformation can get educated and inspired. In Estelita’s Library, a wall of crowded shelves is accented by leftist ephemera: protest signs, radical zines, DIY printings of subversive literature by Marx and the Black Panthers.

“In the typical bookstore or coffee shop, the space can be hostile to doing work,” Lindo explains. “I want Estelita’s Library to be a place where anybody who comes here to work doesn’t zone out by putting headphones in.”

Lindo explains the experience of being stuck in the University District, a student of leftist ideas and culture, marooned in spaces where nobody was having the conversations he wanted to have. Estelita’s Library is the community-scholar’s antidote—an outgrowth of the work Lindo has been doing as an activist with Seattle Peoples Party and other groups on the political left.

“When I talked to Luis Rodriguez, who owns the Station, about this idea, he said, ‘Yeah yeah yeah, do whatever you want,’” Lindo says. “When he came back the next day I was putting up bookshelves. And he was like ‘Oh wow, you’re serious.’”

Lindo stocked books from his own library on the shelves of Estelita’s. He plans to keep the store open with book events and a discussion series and by selling annual memberships for $30. With about 300 current offerings (and many more coming from community donations), the library runs the gamut of academic and autobiographical writing about the social constructions of race, class and gender in the Americas, with offerings by European anti-capitalist theorists and even a few conservative texts sprinkled in.

“Here’s why I have a Glenn Beck book next to The Autobiography of Malcolm X,” Lindo says, laughing. “If we’re just criticizing the system we’re in without understanding the foundations of that system, or only reading people who share our perspective, we won’t know exactly what we’re fighting against. And that weakens us.”

When I ask him about the books responsible for his development as a thinker, he cites Pedagogy of the Oppressed—Paulo Freire’s 1968 classic about education as a tool of anti-colonial empowerment. Lindo has internalized its lessons and others, assuming the role of community scholar and public intellectual.

“I took my daughter with me to the classes I used to teach at Shoreline Community College,” he says. “A student once explained to me that they stayed in my class because they saw that Estelita was there, because they knew that I’d be teaching the community the same way I raise my daughter. That was the first time I thought of naming a bookstore after her.”

Here in the bookstore, Estelita is growing restless. Lindo senses that she may need a change. Us, too.