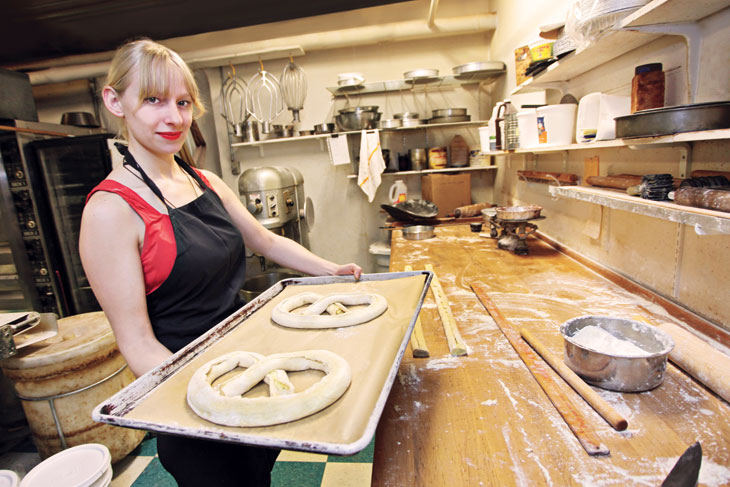 There are two types of people in the world: those who know kringle and those who don’t. Until too recently I drifted through life blithely unaware of the huge pretzel-shaped knots of sweet pastry dough, layered with almond paste and studded with slivered almonds, gooshy and crunchy and perfectly messy. Trust me, it’s no way to live.

The pretzel shape is the trade sign for bakeries in Denmark, where the treat originated, and a painted kringle adorns the sign for “John Nielsen’s Authentic Danish Pastries” in Lower Queen Anne, its loopy old-world aesthetic resembling a port in a storm among the nondescript concrete facades on the block. Nielsen’s warmth, in both temperature and attitude, is enveloping, the smell both familiar and hard to pin down. Cinnamon, certainly, and…something else.

“Cardamom. Use Sparingly” reads the small, pungent plastic tub that Nielsen’s brand-new co-owner Holly Prairie scoots in front of me in the cozy kitchen. Flecks of the spice dot the glossy dough that Prairie just finished rolling out and cutting into precise rectangles. She pipes filling onto the dough—options include almond paste, cream cheese, custard, fruit—and then shapes it into Danish by hand, like everything at Nielsen’s. Hot from the oven a short while later, these morsels bear no resemblance to the Danish I hated as a kid.

“Look at all the layers,” Prairie says, glowing over the Danish dough, which is similar to croissant dough. Stab one with a fork and the layered edges crack apart as the pastry holds together, a neat culinary trick.

The Danish is an international affair; the laminated dough technique traveled with bakers from France to Italy to Austria. Then, the story goes, when Danish bakers went on strike in 1850, Viennese bakers traveled north, bringing laminated dough and cardamom with them. “What we call a Danish here [the Danish] call Wienerbrød, which is Vienna bread,” Prairie says.

There’s something immensely comforting about an established shop that bakes by hand and wants to know you. Nielsen’s feels like a place where you could sit and read all day, and that’s by design. The Danish concept of hygge—added this year to the Oxford Dictionary as “a quality of coziness and comfortable conviviality that engenders a feeling of contentment or well-being”—is a guiding light.

“It’s a magical, wonderful place—I love it here,” says Prairie, who, with her husband, Chris, took ownership of Nielsen’s in July; the young couple are only the third owners in the shop’s 50-plus years. John Nielsen moved to Seattle from Copenhagen in 1965 and took over a bakery called Stig’s Conditori downtown, according to a 1966 Seattle Times article, which soon became Nielsen’s. Nielsen brought with him an extensive formal baking education, scads of high-end experience and, according to a 1978 Times story, “a Danish craftsmen’s medal presented to him by King Christian IX of Denmark.”

When Darcy Person bought the shop in 1999, she’d been working with Nielsen for more than 20 years, beginning with an apprenticeship during culinary school. Prairie, who went to high school with Person’s daughter, worked at Nielsen’s on weekends while studying at Seattle Pacific University. After college, and after budget cuts eliminated her nonprofit job, she went back to Nielsen’s—and realized she didn’t want to leave. “It feels like home to us, and it feels like home to a lot of people,” Prairie says.

I may be new to kringle but I am not new to Nielsen’s. As long as I can remember, my mom has requested a Nielsen’s cake for her birthday, a delicate sponge striated with raspberry jam and swaddled in marzipan—pliable, piquant and as satisfying to the teeth as an impeccably al dente noodle. The bright pink box appeared every year, and every year the leftover cake’s marzipan would mysteriously recede as everyone slyly peeled off strips, nibbling away while safely concealed by the refrigerator door.

Marzipan cakes are a Nielsen’s signature and kringle a Christmas tradition, though they’re available year-round. On Dec. 24 last year they cranked out 160, starting at 2 a.m. to make sure everyone’s Christmas morning kringle was ready for pick up. Other standouts include “potatoes,” which are some sort of heavenly mash-up of cream puff, almond and chocolate; Snitter, essentially a cinnamon roll’s insides unraveled and spread with custard; savory lunch items; standard (non-Danish) cookies; and, of course, kransekake, the firm-yet-soft traditional Danish almond cookie that John Nielsen still makes himself. He and Person both come in on Fridays, and all the shop’s owners past and present bake together.