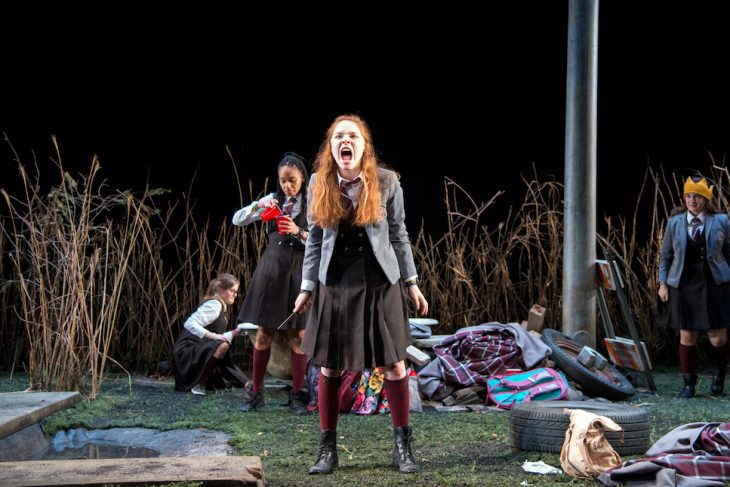 A very smart local actor/director recently articulated something that has been sticking in my craw for ages: “A show starts with the marketing.” We were talking about slapdash branding that at best confuses the nature of a show and at worst preemptively undercuts its professionalism. Normally this problem is an irritant rather than an actual qualm, but in the case of Mac Beth, adapted and directed by massive talent Erica Schmidt and now running at Seattle Rep, the show’s major issue begins with the marketing.

This is not an adaptation of Macbeth. This is a production of Macbeth expertly cut and cleverly conceived as being performed by a group of young women gathered after school to put on the play. (Where are these girls supposed to be going to school? Because the hooded, plaid-lined capes they wear over their grey and burgundy uniforms are incredible, literally and figuratively—kudos to costume designer Jessica Pabst.) That might sound like splitting linguistic hairs, but it isn’t, nor is it a case of misplaced expectations. A few tiny modern asides, red solo cups, iPhone texts and too-brief dance-party moments do not real characters make, and so, essentially, there are no characters on stage who aren’t the characters in Macbeth. Even when the girls are watching their comrades from the periphery, they’re in their Shakespearean world. So ultimately we’re just watching another Macbeth, this time conceived around teenage overacting, which does a disservice to the play and to these presumably talented young performers.

Their world, in this case, is a patch of scrubby, highway-adjacent land, dotted with old tires and a castoff couch and chosen by these seven young women, presumably, for its remote desolation. Backpacks tossed aside, they get right down to Macbeth business: Three witches (Sophie Kelly-Hedrick, Laakan McHardy and Analiese Emerson Guettinger) prophesy that Macbeth (Charlotte Schweiger) will become King of Scotland, though he’s far from the head of the line to succeed old King Duncan. Such launches the Macbeth’s bloody pursuit of power, egged on by Lady Macbeth (Izabel Mar) through murder after murder. Klarissa Marie Robles as MacDuff and a powerful Tamsen Glaser as Banquo round out the cast.

The sly viciousness of youth makes a perfect fit for the Macbeth story, full of insecure but ambitious people, malleable personalities ripe for outside influence, worried about who they are and who they will be, negotiating the power of the group against their own individual power. In the age of events like the Slender Man stabbing, it’s a heady concept. That’s what makes Mac Beth‘s high-energy dance moments feel like such a tease, like we’re so close to finally meeting these real young women, to get more than a cursory feeling for who they are and why they’re doing what they’re doing. There are hints, even in the music—one of the show’s best moments comes when the girls, post-coronation, cut loose to Beyonce’s “Bow Down,” which includes the lyrics: “To make themselves smaller/We say to girls/”You can have ambition/But not too much/You should aim to be successful/But not too successful/Otherwise you will threaten the man.”

But as they bop around the stage to “bow down, bitches!” on repeat, I had to wonder, what are we really learning about these young women, other than the fact that they’re young women? What, for that matter, are we learning about Macbeth?

There’s no context—and it wouldn’t take much to set a frame without ruining the show’s delicious enigmatic intrigue—that gives us a sense of who these girls are, and who they are to one another. Have they been practicing for months? They’re all off book! They have props! There’s a choreographed moment with Banquo’s bloody ghost that was some truly gorgeous lo-fi theatre.

When the weird sisters are laying out their cauldron ingredients you get an alert that they’re taking their roles very, very seriously, but it’s the only tee-up for a fantastic ending that otherwise has the problem of feeling entirely unearned, and thus unsatisfying. How did we get here? Per Seattle Rep’s marketing, how can “the line between real life and bloody fantasy become increasingly blurred” when we have no baseline for either?