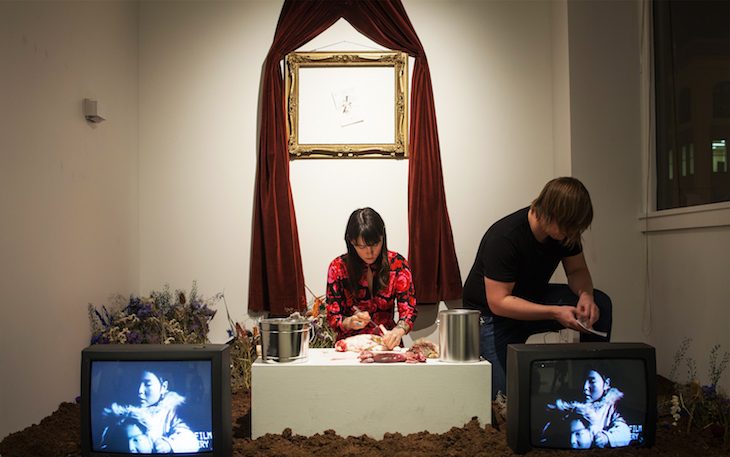 “Time is something we exist in at all times, but we aren’t often given the gift of seeing it,” says Babette Pendleton, director of Yellow Fish Durational Performance Festival. “In durational work you get to see and feel and experience time in this ultra-exaggerated moment. Everything is expanded and that gives you this opportunity to see things you don’t normally see, to think about things you wouldn’t normally think. It breaks us of normalcy. It’s this heightened radical experience.”

Pendleton, a choreographer, visual artist and curator, has been involved with Yellow Fish in several capacities since its inception in 2013, first as an artist and later as venue administrator with her space New Tomorrow. Last year, she took an administrative role assisting founder and previous director Alice Gosti. Pendleton’s ambitious first year as director has been about throwing everything out there and seeing what sticks.

“Number-one thing I knew immediately, based on Alice’s feedback, is that there’s no way you can do this alone,” Pendleton says. “Now that I’ve stepped into the role I don’t know how she was doing it as one person.” To share the load, Pendleton brought on Jillayne Hunter as co-curator and artistic producer and Marlys Yvonne as an administrative producer, along with a team of interns. The expanded staff and a newly open application process allowed the festival to grow, and this year they’ll present a whopping 32 artists where previous years hovered around a dozen. Along with many Seattle artists, this year’s Yellow Fish includes artists hailing from places such as Belgrade, Mexico City, Halifax, New Orleans and Nebraska. “Most of the artists who reached out from a national/international standpoint said, ‘We’ve been dying to find something like this, also we really want to come check out Seattle,’” Pendleton says. “I love that aspect of bringing people to the city and also supporting what’s happening here.”

Yellow Fish is the only festival of its kind in the country, and while the world of durational performance art is niche, Pendleton aims to broaden ideas of what the form can mean. This year’s festival includes music, fashion and food—the festival opens and closes with feasts by Berkeley artist Kim Upstill. “I’m interested in the slow food community,” Pendleton says, “and culinary artists who are figuring out how time affects food, how time affects our sustainability as a society, questioning duration in a really interesting way.”

Pendleton is also experimenting with the long-form format of the festival more broadly. “I wanted to make the festival an experience of duration. Could it go for a continuous amount of days, could we have something happening at all times, all 24 hours?” she asks. “Technically, we’re at 9 a.m. to midnight all five days. During the night there’s a film you can see from the street. I’m curious from a research standpoint to see what the audience can handle.”

Pendleton also introduced a 2018 festival theme, Time Passed, which asks artists to apply with pieces they’d previously performed. “Because there’s this passing over of hands, it felt especially important that we talk about what the past is before we jump into the future.” It’s a chance for artists to reflect on time’s effect on their work and present a second draft, which can be a rare opportunity in durational art. “What is it about history that feels like it needs to be honored and highlighted, and what doesn’t work anymore and why?” Pendleton asks. “That theme is so vital right now in terms of the city. History being erased, buildings being torn down, things getting lost in that passing of time.”

One of the longer performances comes from Sarah Cameron Sunde, who stands in ocean waters around the world for an entire tide cycle, a full 12 hours. Films of three of her performances will be projected simultaneously onto three walls of Capitol Hill venue LoveCityLove. “To me, that’s the most simplified version of time,” Pendleton says. “Time in relationship to body, human existence on this planet, the interaction of human and environment. It’s incredible watching the tide come up. It comes all the way up to her cheeks and then it comes all the way down. She stands there in the same spot the whole time.”

Performances will range from contemplative to wild, subtle to extreme, but what excites Pendleton most is the unknown. “So much of what’s happening is only happening right then. Even for the artists. There’s a lot of unpredictability. As you’re doing it and you’re getting exhausted, or you’re getting excited, or things are breaking, the piece is changing. That’s what I love about it. You have no idea what’s going to happen.”