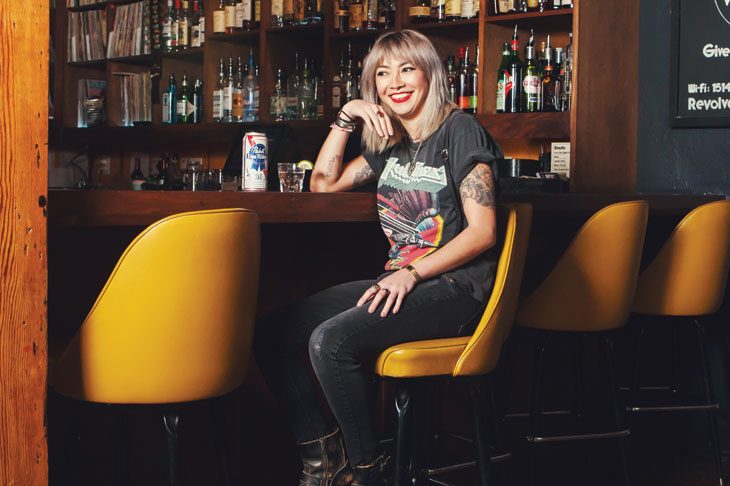 WHO Naomi Rincon, the 30-year-old hairstylist to Seattle’s artists, drag performers and rock stars. Rincon was born in Los Angeles, went to school in the San Diego suburbs and began styling hair—her own and others’—when she was a teen. She arrived in Seattle on a road trip to see Big Business in concert for her 20th birthday and fell in love with the city. Now Rincon works at Ritual Alchemy at Red X Hair Studio and freelances as a hair and makeup stylist. Lately she’s been delving into special-effects makeup to incorporate some “unnatural things” into photo shoots.

THE LOOK “Very minimal with a heavy dose of rock ’n’ roll—and it depends whether I’m headed to a metal show, a nice dinner or a hair event: a fringe jacket; sheer stuff under a wild printed dress and a clear plastic moto jacket, always with boots; my simple vintage band tee, Fryes and black skinny jeans; or a black lace dress with harness and studded heeled booties with a slim black leather jacket. My other staple is an Icelandic Life Coat I got two years ago—one-of-a-kind, handmade in a basement of this rad store in Reykjavik.”

ICONS “Film and music from the ’70s and ’80s. I love Jodorowsky movies, so sometimes I borrow styles from his characters. The women in rock ’n’ roll—the Runaways, Girlschool, Debbie Harry. Wendy O. Williams was the reason I got a mohawk when I was younger. The grime of ’80s GNR and Motörhead and Priest. I’m drawn to raw, strong, androgynous people and looks.”

UP NEXT A collaboration with photographer Stephanie Jamieson (whose work includes documenting Imminent Mode, Adé Cônnére and Brenda Bryan of Lovewell Couture) is coming to a gallery this winter. Rincon also recently started DJing for Overkill, a night that takes place sporadically at bars such as Bait Shop and Revolver.