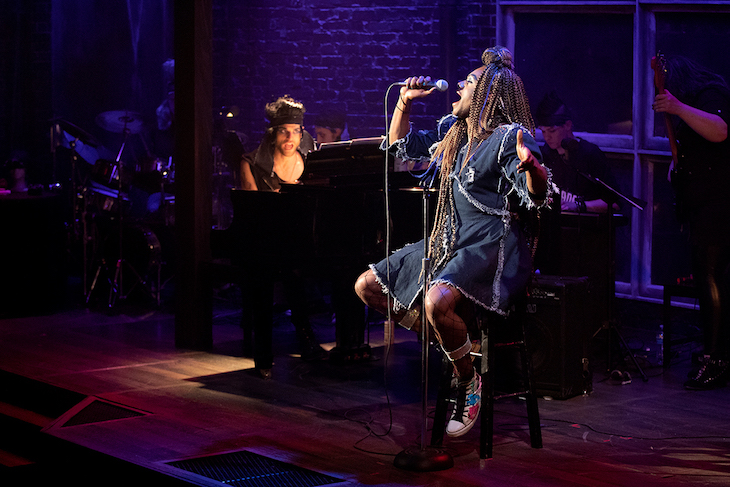 From the moment she glides onto the ArtsWest stage, an all-American, denim-clad butterfly, Hedwig not only demands the spotlight, she deserves it. The star of the Hedwig and the Angry Inch, a sublimely dingy Eastern-bloc rock goddess, is here performing with her band the Angry Inch. And by some coincidence, she says, across the river at Giants Stadium, rock star Tommy Gnosis performs his Tour of Atonement.

We’re here for a rock concert but also a cabaret tour through Hedwig’s life: an unhappy child in East Berlin, the botched sex-change operation and unhappy marriage that brought her to the U.S., the musical and romantic relationship with Tommy that landed them on their respective stages tonight.

The spare production has few frills, but it has everything I want: a band that slays, a Yitzhak (Dani Hobbs) who wails and a Hedwig, in Nicholas Japaul Bernard, who preens, seduces, jabs, jokes, wilts and also wails, but more than anything, holds us in the palm of their hand with emotional honesty and real-time responsiveness. Missed cues and costume mishaps hold no terror for them, and thus, none for us.

Much like Hedwig herself, Hedwig lives in a limbo, somewhere between rock show and musical, campy and earnest. As written by Stephen Trask (music and lyrics) and John Cameron Mitchell (book), who created the role of Hedwig in the original off-Broadway production, Hedwig is a raw nerve coated with a thin veneer of acerbic self-preservation, a knife-edge balance, and in this production the earnestness kicks in a bit late for my taste. “The Origin of Love,” one of the most beautiful, conceptual, heartfelt songs in the show, comes relatively early, and as directed by Mathew Wright, this Hedwig doesn’t seem to think we’ll stay with her if we’re not laughing at least a bit. By the time we reach “Wicked Little Town,” however, Bernard’s vulnerability cracks hearts wide open—she always has our number, and we’re happy to give it to her.

There are no projections in this Hedwig, as there often are in the low-rent rock musical extravaganza, but the show doesn’t need them. In a space as intimate as ArtsWest, it’s just as easy to have your bandleader run the “Wig in a Box” singalong as it is to follow a bouncing ball over projected lyrics. One thing this production could use, for the love of god, is some cordless microphones. Yes, the cords make sense with the low-rent club vibe, and Bernard handled the endless cord-negotiating with self-aware humor, but it got old. Also, cabaret tables set up in front of the proper seats create an amazing vibe but also some real sightline problems, so choose your seats accordingly.

Many of the show’s puns are timelessly Hedwig: “Thank you, thank you, I do love a warm hand on my entrance,” she says after a wild round of applause. Her agent’s name is Phyllis Stein. But plenty of the script can be tailored to both the times and the performer: We get Baby Phat jokes, a pointed Zionist reference, a jab about Tommy’s young life as a douchebro with a fish on his car.

This Hedwig is also unquestionably Black, from the waist-length braids (“I call them my Kanekalon emotional support rods”) to the Whitney Houston licks to the joke about a class-action suit against the white people of America for casseroles. Mitchell and Trask knew that show needed to stay nimble to stay relevant, and in 2018, a Black trans woman owning this show holds roof-shaking resonance.

Given the flexibility built into the script, I’m a bit baffled as to why we’re unmoored in time and space. Are we near Giants stadium, or are we on the west coast? Is it 1998 or 2018? References are made supporting all of the above, and sometimes a choice must be made so we don’t waste our audience brain-space thinking about it. I’d much rather think about Hobbs as Hedwig’s much-derided husband Yitzhak, a perfectly slump-shouldered, razor-voiced sidekick in a teal, painted-on beard. Bandleader Chris DiStefano kind of reads as a musical-theatre performer in punk drag, but the harmonies in the show are so skin-tingly good you forget about it.

As Hedwig slowly reveals herself over the course of the show, she strips herself of her wigs and costumes, sweaty and radiant, exhausted and electric. Yitzhak, similarly set free, glows. Defining yourself for yourself is a ragged, wrenching process, a goal that few of us ever reach. These are two voices to follow on your way, through the maze of whichever Wicked Little Town you call home.

Hedwig runs through July 8 at ArtsWest in rotating rep with Lady Day at Emerson’s Bar & Grill.