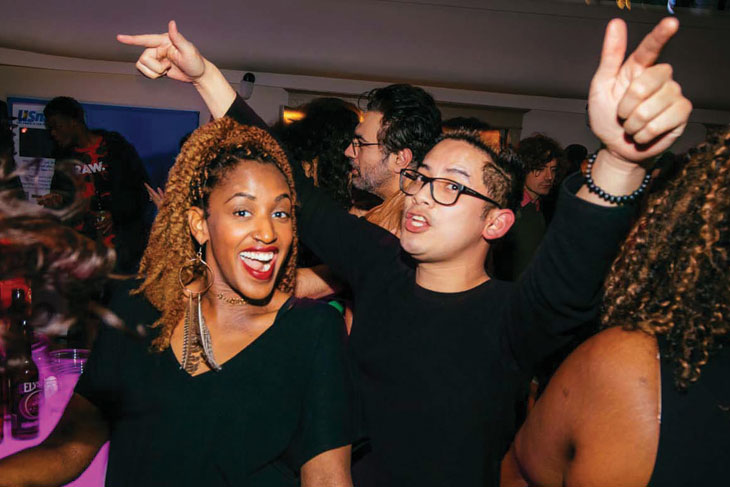 Much fun was had at the end of January when we celebrated the 2018 Future List at Washington Hall. Here Justin Huertas and Lauren Du Pree show the kind of revelry that went down. Photo by Nate Gowdy

Nothing puts a stop to winter doldrums and political malaise like an invigorating slate of spring performances. I’m holding fast to that promise as we embrace the new season.

Abstract or narrative, quiet or loud, comedic or dramatic, the shows going up on local stages between now and Memorial Day are awash in vision and invention. And so, it makes sense that that our Spring Arts Guide, beginning on page 23, emphasizes newness. Among the 29 performances we think you need to see are many world premieres, Seattle premieres and various imaginative reinventions, like the site-specific take on Hamlet coming to Stimson-Green Mansion—with two Hamlets.

Some of the artists featured are likely familiar. Choreographer Dani Tirrell and bassist Evan Flory-Barnes are both mounting new full-length works at On the Boards, and both are charting new ground for themselves in the process. (Fun coincidence: Evan’s young niece, Maya Flory-Barnes Salas, also appears at OtB this season with theatre heavy-hitters Frank Boyd and Libby King.) Others, including the artists on this month’s cover, are in City Arts for the first time.

The local performance scene has a long history of experimentation, but this is the most daring, sophisticated and complex roster in recent memory. The scene appears to be leveling up—and we all reap the benefits.