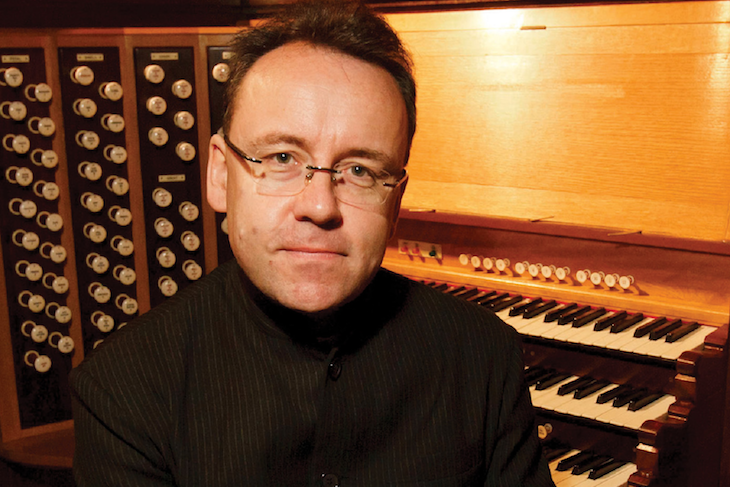 The performance of Mahler’s Symphony No. 2, the “Resurrection,” Friday night at St. James Cathedral, transcribed for organ and performed by David Briggs, sounded like something not to be missed. The force of the two organs together—the huge 1907 Hutchings-Votey instrument, which was restored in 1996, and the smaller Rosales organ built in 2000—recreating Mahler’s work in the cathedral’s resonant acoustics promised to be a moving experience, particularly as the cathedral had gathered a huge choir to take on the final choral movement.

Alas, with the exception of the singing and a few small sections of the 90-minute work, which was performed without intermission, the result did not measure up to expectations.

There were two main reasons. First, Briggs’ transcription was so dense that it was rare to hear any individual threads as they would have been played by different orchestral instruments. It sounded more like thickly felted fabric than a tapestry of interwoven sound and colors. Only occasionally did different timbres and colors come through in the higher registers, mostly in the second, slow movement, where they were a pleasure to hear, and in part of the third, though there were short moments of musical color in other parts as well. In the second movement, Briggs also utilized the second organ from the opposite end of the cathedral, giving some great antiphonal effects.

The second reason that the performance was much less effective than it might have been was Briggs’ choice of playing at extremely high volume. Those big organs can make a lot of noise and, for a large part of the work, Briggs played at not just a forte but up to a five-forte level, which blasted the eardrums and made it impossible to hear any details or different timbres. The rumbling of the bass register anchored the sound and reverberations could be felt through the feet, though they did not shake the cathedral too much.

Two soloists joined in for the fourth and fifth movements, mezzo-soprano Margaret Gawrysiak and soprano Clarice Alfonso. Both have big voices that could easily be heard throughout the cathedral, and both sang with expression and eloquence. Both, particularly Gawrysiak, have omnipresent vibrato that is quite wide, and when they sang in duet it was impossible to tell what pitch they were singing on or hear the clear harmony that should have been present.

To the last movement, Mahler adds a chorus which sings of the joy of rising from the dead, and this was the best part of the performance. The cathedral gathered together not only its own main Cathedral Choir but its Jubilate Young Women’s Ensemble, plus Opus 7, members of Settle Pro Musica and the Illumni Men’s Chorale, totaling some 180 voices, led by the Cathedral director of music Joseph Adam. During the singing Briggs kept the organ volume down enough to be able to hear the voices clearly and this part of the performance was both moving and beautiful to hear.