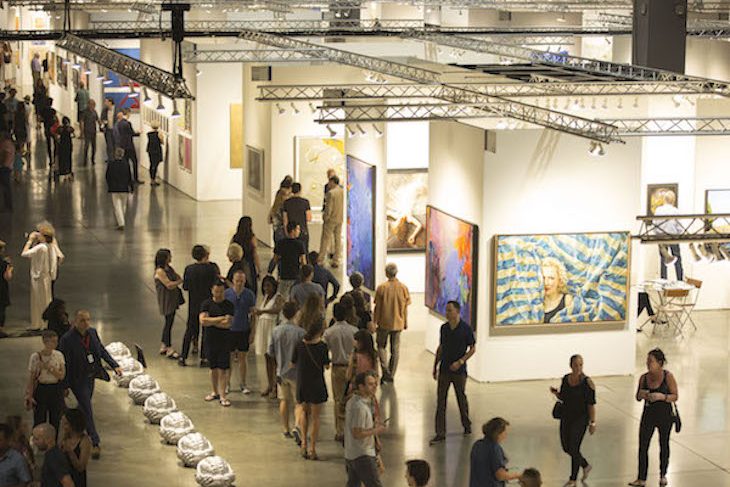 The scene at Seattle Art Fair 2017

SAF is using the hashtag #SeattleArtHoliday this year, its fourth, and that pretty much sums up the tide of art, people and parties about to let loose. In addition to 100+ gallery booths, there’s a slew of talks and programs, like Gagosian’s presentation of Chris Burden’s Scale Model of the Solar System, placed both within and without the bounds of CenturyLink. (Pluto is located somewhere in Seattle Art Museum!) —Amanda Manitach
CenturyLink Field Event Center

If you’re looking for a sampler of cream-of-the-crop Northwest artists that may not be repped at the Art Fair proper, look no further than this massive group show just a stone’s throw from CenturyLink Field. Hung floor to ceiling and recalling the style of the Salon des Refuses, look for works by Emily Gherard, Dawn Cerny, Robert Hardgrave, Fay Jones, Jeffry Mitchell, Whiting Tennis, Robert Yoder and many more. —Amanda Manitach
Avalara Hawk Tower

As the fair shutters for the night, City Arts cranks things up for an afterparty! Join us following First Thursday’s art walk and opening night of Seattle Art Fair for a soiree featuring tunes by Afrocop, Stas THEE Boss, DJ Toya B and Ben Von Wildenhaus, along with art, drinks and more. —Amanda Manitach
AXIS + The Cellar at Nordo

Adam Ant put out an album of new material in 2013 that sorta sounded like new wave psych-rock recorded on GarageBand. It’s eccentric as hell and I kinda dig it. That said, this is the ANThems Tour, so paint your face, throw on your waistcoat, and expect Ant to stand and deliver lots of the hits. —Tony Kay
Woodland Park Zoo North Meadow

A play by Federico García Lorca, adapted by Langston Hughes, produced by the Williams Project, with original music by Shenandoah Davis: yes, please. The pre-show block party full of food, drinks and music is just icing on the cake of this story, about a wedding day in an isolated village and a bride visited by her former lover. —Gemma Wilson
Equinox Studios

For a lot of years, the Purrs have been crafting layered, hooky, sometimes swirly guitar pop that sounds like the best British guitar band you’ve never heard. Destroy the Sun, their newest long-player, represents their strongest batch of tunes yet, and it’ll sound epic live. —Tony Kay
High Dive

This new artistic endeavor presents workshops of four plays and two new musicals, all in the course of one crowded weekend full of familiar names and intriguing newcomers. Ilove a good developmental workshop—so interesting! so unpredictable!—and free RSVPs are required for these, so get on it. Co-presented by local dramaturgy/production outfit The Umbrella Project and New York-based org The Commonground. —Gemma Wilson
18th and Union

Strange alliances abound these days. The Satanic Temple (not to be confused with Anton LaVey’s Church of Satan) is a secular, political activist organization that uses religious freedom legislation to reestablish the separation of church and state. Tonight’s event (dance and burlesque performances, live music by Lies in Dust, Riotlegion and Post Rapture Party) is aimed at protecting women’s reproductive rights, currently under renewed attack by the religious right. —Dan Paulus
Substation